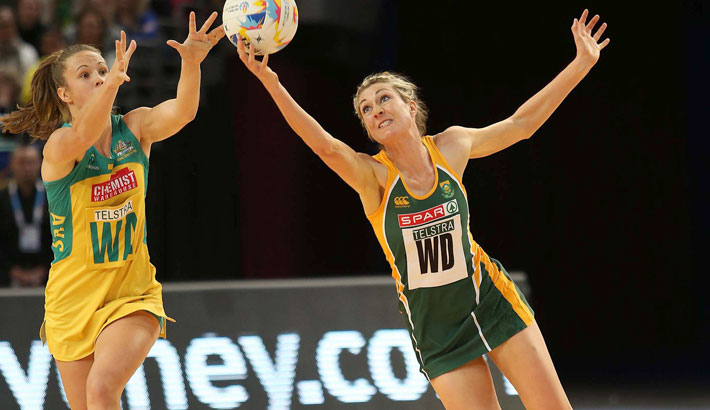 Nerves got the better of the SPAR Proteas on Wednesday night as the Australian Diamonds dominated them 66-31 in their qualifying match at the Netball World Cup in Sydney.

The Diamonds, who have won all 32 encounters between the teams, came out hard from the start, and were 11 goals up before the Proteas scored their first goal. The South Africans looked jittery and reverted3 to their old ways, with long, looping passes which the Diamonds intercepted with ease.  At the end of the first quarter, Australia were 23-5 ahead.

Coach Norma Plummer made a few changes and the Proteas looked more settled in the second quarter, but the Diamonds continued to overwhelm them.  The turnovers the South African defenders achieved were lost on their way into the Proteas’ circle, and the Diamonds had a 38-12 lead at halftime.

Plummer obviously had stern words with the team, because they were much better in the second half, going back to the short, sharp passes Plummer has been calling for.  Australia won the quarter by 16 goals to nine.

In the final quarter, the Proteas had more intercepts and turnovers than the Australians, and lost the quarter by only two goals (12-10).

“It was a bit disappointing, especially in the first half,” said Plummer. “A couple of the players just let the ball go into no man’s land. They weren’t even processing.

“But that’s nerves. That’s being worried about playing the opposition, the number one team, and I thought that as we got further into the game, they played a little better.

She said her message to the players before the match had been that they had nothing to lose, so they could relax and take it up to them. “You learn more from your defeats than from your wins,” she said.

However, Plummer said it was essential for some of the Proteas to play in the ANZ league, which is the best competition in the world, if they were to improve.

Captain Maryka Holtzhausen conceded that the players had lost focus in the early stages of the match.

“At halftime we decided that we just had to focus on playing the ball and play our own game and it worked better the moment we started getting the ball into the spaces,” she said.

“I think the biggest thing we’ll take out of this match is how much we still need to improve.  I think there were some great passages of play, but sometimes our ball placement and giving the ball to the wrong person let us down.  We saw in the first half that we can’t play the overhead ball, because it went out of court numerous times.  We need to start playing the short ball into the circle.”

South Africa have the day off on Thursday before meeting England on Friday afternoon.  They have to beat England to qualify for the semifinals.

Photo 2 caption:  Lenize Potgieter in action for the SPAR Proteas against Australia. The home team and world champions easily beat the South Africans, clinching the match 66-31 to maintain their unbeaten record in 32 matches. Photo: Reg Caldecott