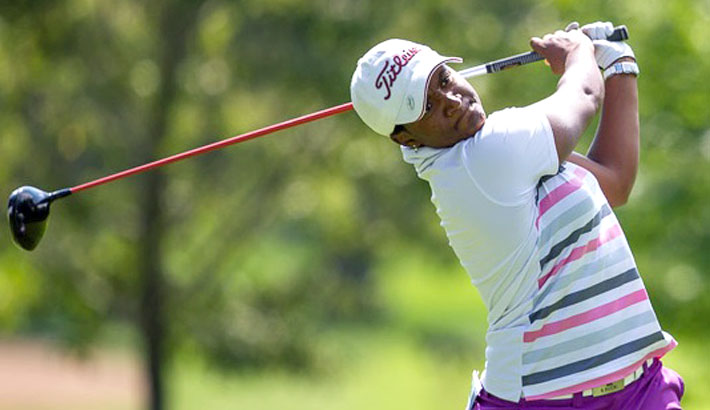 Nobuhle Dlamini didn’t know what to expect when she stepped onto the first tee of the East Course at the Royal Johannesburg & Kensington Golf Club on Monday.

Struggling for form for a few months now, the big hitting Swazi golfer was excited to find herself in a three-way tie for the first round lead in the Sunshine Ladies Tour Open.

“I just trusted my swing and it paid off,” said Dlamini, who carded two-under-par 70 to join Charlotte Ellis from England and Boland amateur Bianca Theron in pole position.

“I just picked a club, committed to the shot and executed it. The confidence built and it fed through to my short game, especially the putter. Golf is such a game of confidence and it’s great to be gaining some self-belief again.”

The leading trio could come under pressure from Ashleigh Simon, though.

A three-time winner last season, Simon lurks just one stroke off the pace in a tie for third with 14-year-old amateur Woo Ju Son.

Dlamini began with bogeys at the fourth and fifth holes, but minimized the damage with a birdie at the eighth and reeled in three more birdies down the back nine.

“I ended in the bunker after catching a tight lie off the tee and hitting a tree, but I made a good up-and-down to walk away with just a bogey,” Dlamini said.

“My pitching wedge into the par-three was perfect, but the ball spun back and rolled into the water. It was an unlucky break, but you just have to take your punishment and walk away.”

The birdie at the eight gave the 23-year-old Killarney golfer some positive momentum, though.

She holed a 12-footer for birdie at the par-four 10th and gains at the par threes put her into red numbers.

“I hit a great shot into the 12th and boxed a short one for birdie,” she said.

Dlamini struggled in her rookie season in Europe last year and returned with her confidence in taters, but she is starting to show the form that carried her to the number three spot in the World Amateur Golf Rankings in 2013.

Coming off a tie for third at the Cape Town Ladies Open last week, Ellis certainly carried some confidence into the first round.

The Minchinhampton golfer surrendered strokes at the fifth, 10th and 12th holes, but negated the deficit with birdies at the eighth, 13th, 15th, 16th and 18th.

Theron started with a bogey, but gains at the sixth, eighth and 18th handed her a share of the lead.

The former number one ranked junior put her golf career on hold last year in favour of her studies and, having secured a golf scholarship with seven distinctions, the Ernie Els & Fancourt Foundation member will begin to pursue a degree in BSc. Mathematics at the Mississippi State University in August.

For now, the 18-year-old Devonvale Golf Estate player wants to make the most of the experience on the Sunshine Ladies Tour to prepare for the Sanlam SA Stroke Play and Amateur Championships.

“I want to learn as much as possible from playing with the pros to prepare for our flagship events,” Theron said.

“It’s such an opportunity for us to learn and I just want to make the most of it.”

Dlamini was really pleased to find herself in contention for the first time and South Africa’s former number one ranked amateur was just as thrilled to see Son’s name on the leaderboard.

“I know Woo-Ju from my amateur days and it’s quite amazing to see how well she played this tough golf course,” Dlamini said.

“It’s only March and Woo-Ju has already notched three third place finishes on the Womens Golf South Africa circuit. I must say that I envy these youngsters, because this experience is going to raise her game to a whole new level.”

Stacy Bregman, who captured her third title this season at the Cape Town Ladies Open at Royal Cape Golf Club on Thursday, has some work to do after signing for an 81.