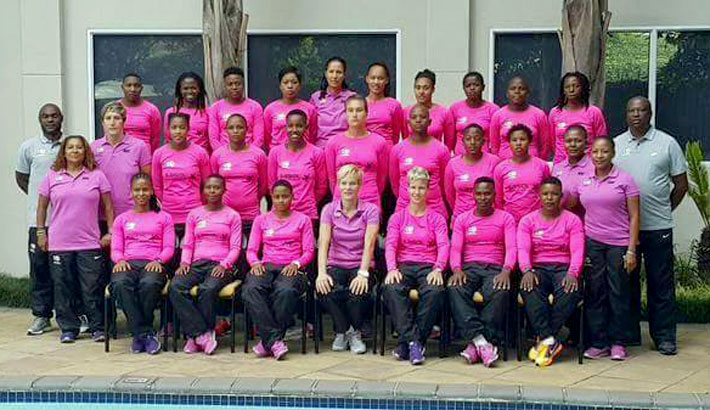 The Eighth Edition of the Cyprus Women’s Cup starts in earnest on Wednesday, 4 March 2015, where the SA Women’s Senior National Team Banyana Banyana one of 12 nations invited to the annual tournament in Cyprus from 4-12 March.

(Click to view the 2015 Cyprus Cup Groups and Fixures, South Africa’s record in the Cyprus Cup, and a list of the tournament’s winners and runners-up)

Banyana Banyana return for the fifth time in the event – they first played in 2009, but did not take part in last year’s event which was won by France. Coach Vera Pauw’s charges are in Group C, along with Mexico, Belgium and the Czech Republic.

Banyana Banyana will face Mexico in their opening match of the tournament on Wednesday, the clash to take place at the Tasos Marko Paralimni in Cyprus, kick-off at 14h30.

The last time the South Africans came together was three months ago at the African Women’s Championship in Namibia.

Matlhomola Morake: From a player’s point of view, how are the preparations going?

Janine van Wyk: Actually going very well, better than I expected. We just had a very long three-month break following the 2014 CAF African Women’s Championship in Namibia. I really thought it was going to be hard for us to get back into it but it’s gone really well. The girls are looking very sharp and we are looking forward to the upcoming tournament.

MM: Some new faces in the team, how are they settling in?

JvW: They are doing very well because most of them have been with us in the national team before, so it’s not really new players. There are one or two who are totally new but they are gelling pretty good. The experienced players are trying their best to make them feel comfortable around everyone – especially those who feel a little left out and shy. But on the field they are doing well and hopefully they get to stay with us for quite some time.

MM: How important a role are the experienced players playing in the team, especially ahead of this tournament?

JvW: They are always key to the team. Having the likes of Portia Modise, Amanda Dlamini, Noko Matlou and Nompulelo Nyandeni as well as some others, makes my job much easier and takes away a lot of things off my shoulders, especially with the youngsters, who, when they are not doing well, I have these players to encourage them and having that is good.

MM: You say the team hasn’t played in three months, in terms of match fitness, will that affect the team in the tournament?

JvW: I don’t think so, even though I know we can make use of more match fitness. We are focused on the All Africa Games and Olympic Games qualifiers, so for me and team as well as the coach, it is not so much about the result that we will get here against these high-profile teams, but it is about correcting our performance and what we are able to do. The coach is working on our weaknesses and strengths, and moving forward is the most important part.

MM: All Africa Games and Olympics Games qualifiers coming up, what role will this tournament play in terms of that?

JvW: This is a very important tournament for us, the reason we are here is to prepare for those upcoming Games. We might think it is easy playing against the likes of Botswana or Kenya or other “low profile” teams, but then again anything can happen when we go to play them. So we have to use this tournament to prepare thoroughly so we can get to Rio in 2016, which is the highest stage at this moment, but first we have to get to the All Africa Games which will work wonders for the team in terms of further preparation and more experience as a group and individually and I believe this tournament will help us get there.

MM: How will we fare in this tournament?

JvW: We have to look at our first game before we can talk about the other two matches. Mexico is a very strong team, very physical and have quite a bit of experience having played in the World Cup, so we are going to have a very tough encounter against them but what we have to do is to go out and give our best, and make use of the chances that we get because we always create chances but we never seem to hit the ball at the back of the net, and that is one of our weaknesses at the moment but we will get it right.

MM: Missing out on World Cup qualification must still be weighing heavily on the team?

JvW: We have put not qualifying for the World Cup behind us. The truth is that last year was huge disappointment for all us and it is still at the back of our minds but we know that we can only lift ourselves from here. What surprised me was the attitude of the players when we got together last week, they looked very hungry to fight all over again. The first training session was amazing and looked like we hadn’t even left camp. So we have to come back stronger and hopefully qualify for the Olympics in Rio.

MM: Personally, how are you feeling about Banyana Banyana this year?

JvW: I am very positive when it comes to Banyana Banyana. We have so much to give, we have so much talent and potential in our development and it’s not only about Banyana Banyana but it’s also about the youngsters coming in as well. I am confident we are going to do well especially after the disappointment of not qualifying for the World Cup. The girls have bounced back very well and know our next goal we have to achieve and we are working all together towards that.