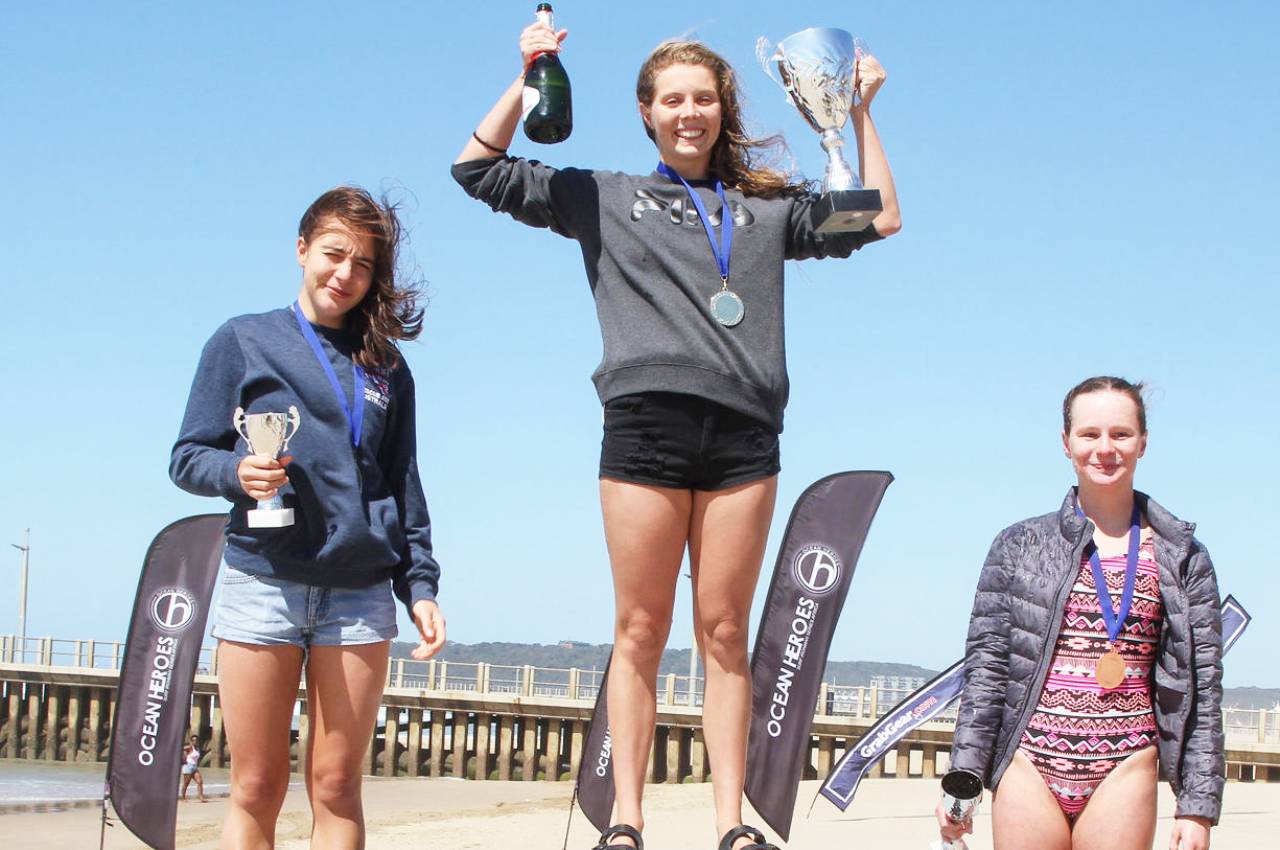 The women’s enduro produced drama at the ADreach Ocean Heroes Surf Swim. Eastern Cape ace open water swimmer, Amika de Jager was superb on the swim leg, and with the organisers wisely scrapping the surfski leg, she started the malibu board leg with a commanding lead.

She reached the end of the pier with her lead shrinking but then fell prey to the surf and north-easterly winds and was swept into Bay Of Plenty where she was dumped in the surf and had to swim all the way to the beach to retrieve her malibu board.

That left the door open for the nuggety defending champion Alice Edward, with young Paige Horn right on her heels, to move to the front, grind into the relentless swell to the turn-can before riding the surf into the beach for the run leg along the pier.

Edward’s title was reward for her tenacity and consistency, with Horn second and the heroic Daisy Mowat, who has just left the Nipper ranks, in third.

“We were all together trying to punch through the surf and I realised that this where I have to make a move,” said Edward afterwards.

“It is your own race. You have to stop thinking about everyone else and getting stressed out. You have to focus on yourself and making the least number of mistakes, which is what it all comes down to,” she added.

There was a rousing welcome for de Jager when she finally made it to the finish after her beating at the hands of the Indian Ocean.

“I am disappointed but at the same time I was excited to challenge these conditions, and I am so grateful I could just finish. I am so proud of myself,” de Jager said.

Earlier in the day 15-year-old Tatum Botha came out of the surf first to claim the top step of the podium in the Surf Swim. While, Alice Edward was crowned in the new malibu board race.

Photo 1 Caption: Defending her title at the ADreach Ocean Heroes Enduro on Sunday was Alice Edward, seen her on the top step of thye podium with Paige Horn and Daisy Mowat. Photo: Brian Spurr/Gameplan Media