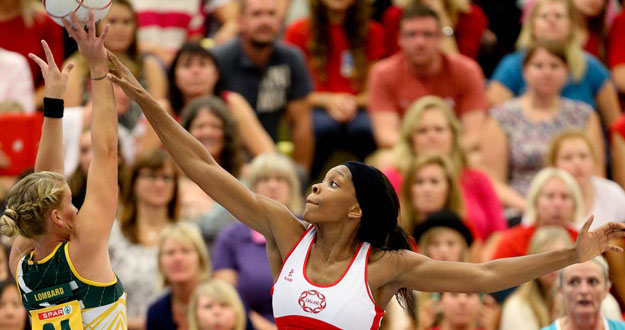 England the Better in First Test

In a nail-biting first test match against England on UK soil, the SPAR Proteas fought a good fight, starting off very strong, only to fall slightly behind towards the end of each quarter to win the opening encounter of the three-Test series 49-38.

The score was neck and neck to begin with, until it equalled at five-all in the first 7 minutes of the first quarter, thereafter South Africa took the lead. The combinations set by Coach Elize Kotze worked very well.

Bongiwe Msomi was her usual Tigress on centre, supported by Simnikiwe Mdaka on wing attack, and the team of the lanky Melissa Myburgh on goal shooter and Maryka Holtzhausen on goal attack was a powerful one.

The SPAR Protea players were focused and feisty on court, and maintained majority of the possession until England equalled at 10-all, just scoring a final goal to end the first quarter 11-10.

The second quarter was much the same as the girls in green and gold levelled out the field with their first goal, and then leapt ahead by three goals within the first four minutes. England crept up, but South Africa was having none of it and maintained their lead well into the second quarter.

However, a few consecutive goals and England was able to close the gap again with an 18-all score, sneaking in a further two goals before the half-time whistle.

It was the third quarter that let the SPAR South African side down, as they were not able to capitalise on a number of turnover balls. England was quicker at getting their ball into the goal circle, and was able to gain a lead of 31-23 in the sixth minute.

South Africa found their rhythm and began closing in, but lost it again after England called time, and lagged at the end of the quarter by 29 to 35.

Coach Elize Kotze made a number of changes in the final quarter which included switching Myburgh with Vanes-Mari du Toit and bringing Thuli Qegu on as wing defence.

Some new combinations aided in team stamina, but the last three minutes of the final quarter were England’s spotlight. The ladies in red made a number of intercepts and quick passes to score consecutive goals, and they finished the match with the 49-38 win.

England Coach Anna Mayes gave credit to the South African side after the match; “You can never underestimate a team that South Africa brings, they have a lot of depth in the team, all respect and acknowledgement to South Africa, especially in their attack.”

Mayes, wasn’t as happy with her own team’s performance; “We were ill-disciplined, and didn’t cherish any of the ball possession that we were given or gained. We probably only found our groove in the last three minutes of the final quarter of the game.”

“I need to settle my combinations,” said Kotze, “We still have two tests left, and I need to put up the best seven who are able to play at this intensity.”