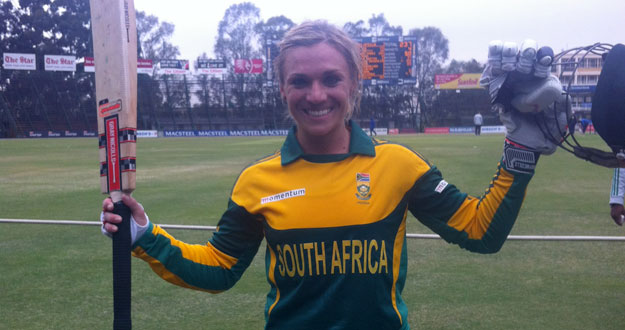 Mignon du Preez scored her maiden One-Day International century to propel the Momentum Proteas Women to a 96-run victory over the Bangladesh Women at the Bidvest Wanderers Stadium in Johannesburg on Sunday.

This win gives the Proteas Women a 2-0 lead in the ODI series, and another series win over their sub-continent counterparts.

The Proteas were sent into bat in overcast conditions but quickly adapted to the lively Wanderers conditions. Trisha Chetty (16) lost her wicket early. However, Du Preez and Lizelle Lee (71) put together a 106-run second wicket partnership to gain some momentum.

Du Preez and Van Niekerk put together 92 for the fifth-wicket, which ensured the Proteas Women finished on a competitive total of 237.

In response, Bangladesh Women’s openers started positively with an opening 50-run stand. Newcomer Elriesa Theunissen made the breakthrough when she dismissed Ayasha Rahman for 26. This wicket was followed by the two quick wickets of opener Fargana Hoque (27) and Rumana Ahmed (7) and the start of the downward spiral.

The rest of the order had no answer to the bowlers, with leg-spinners Dane van Niekerk (3/27) and Sunette Loubser (3/15) accounting for the bulk of the wickets.

The series moves to SuperSport Park on Tuesday for the third and final ODI. Spectators are invited to bring their families for a “braai” to celebrate Heritage Day in support of the Proteas Women.