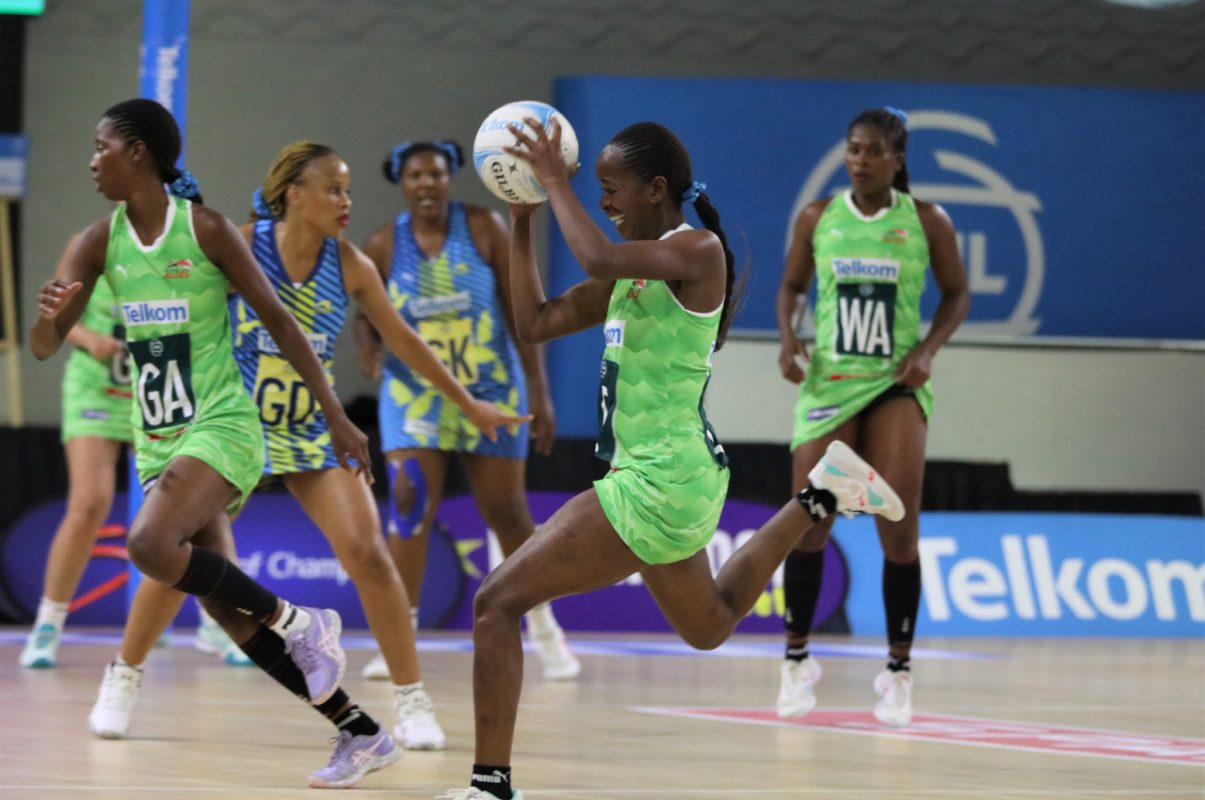 Fireballs and Aloes Leave No Stones Unturned in Durban

The Golden Fireballs wrapped up their Power Week unbeaten after winning 55-39 against the Stings. The Fireballs have been one of the crowds’ favourite following a prodigious start. The Kingdom Stars also recorded their first victory against the Flames after beating them 57-52 in a competitive encounter.

The Gauteng Jaguars managed to redeem themselves against the Free State Crinums with a 53-38 win. Both teams came into this match to turn things around, having lost to the Fireballs in their previous games. Player of the match, Jamie van Wyk and Simone Le Roux applied relentless pressure in the Crinums’ shooting circle which forced a plethora of turnover balls. The Jaguars left no stones unturned offensively and increased their lead to register their second win in the tournament.

In division two, an invigorating game between the Kingdom Queens and the Eastern Cape Comets ended 38-38. The Comets put themselves in an advantageous position to win the game when they were leading 30-23 in the championship quarter, but the Queens showed some belated fight in the last quarter to even things out in the end.

In the other fixtures, the Tornados ended their winless streak following an impressive 44-39 victory over the Limpopo Baobabs. The match was tied at half-time, and it was pretty much a one for you, one for me kind of a game in the third quarter. Tornados coach, Danlee Mathews made a change in the shooting circle and brought in Adri Kannemeyer on Goal Attack, the goals continued to sink in effortlessly which made a significant difference to the score-line.

Meanwhile, the Eastern Cape Aloes reminded the Sunbirds why they are the current defending champions when they beat them 56-40. Sunbirds Wing Attack, Bhongolethu Dibakwane struggled with an injury in the opening quarter which forced coach Thembisile Mdluli to move Jani Bergh on WA and introduce Sylvia Lebelo into Centre.

The combination of Aloes Goal Attack, Zandre Smit and Shooter, Kaylin Coetzer posed challenges for the Sunbirds defensive duo of Tumelo Nkoe and Palesa Mbukwana who worked tirelessly to hamper with their momentum, but they were too determined to finish powerfully.

Photo 1 Caption: Eastern Cape Aloes reminded the Sunbirds why they are the current division two defending TNL champions when they beat them 56-40 on Sunday, 1 May 2022. Photo: Netball SA /Supplied