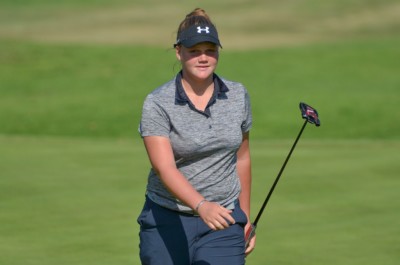 Caitlyn Macnab and Jordan Rothman were eliminated in the first round and 14-year-old Kiera Floyd lost in a tightly contested second round tussle at the R&A Girls’ Amateur Championship in Scotland on Thursday, 15 August, 2019.

Macnab from Ekurhuleni went down four and three to Spaniard Julie Lopez Ramirez in the morning session at Panmure Golf Club, while Australian Kirsten Rudgeley routed Rothman from Western Province five and four.

Floyd – the third member of the GolfRSA Elite Squad to make the match play stage – survived a humdinger against Lizzy Peters, beating the Dutch golfer at the 19th hole to make the top 32. The Ebotse golfer faced Paula Schulz-Hanssen from Germany in the afternoon, but despite a brave comeback on the back nine, Floyd lost the match two and one.

“The match between Kiera and Lizzy went up and down, and they were all square until the 15th hole, where a bad lie on the par three left her with little room to manoeuvre and she went one-down,” Greasley remarked.

“Kiera hit a great drive on 17, a good second shot and holed a superb putt to square. They were still all square after 18 and was the first match to go to extra holes. On the 19th hole, Kiera hit another great drive and a good second to a couple of metres and she clinched the match with a birdie.”

With the wind intensifying, Floyd battled in the afternoon and was three-down through 10 holes.

“Kiera rallied to win the 11th and 12th holes, and squared the match on 13, however, her shot into the par three 15th went wide,” said Greasley.

“She left her chip short on the green and Paula won the hole when Kiera missed a long putt for par.

“She had a chance to square the match again on 16, but her putt to win ran 2 to play and her opponent sealed her win with a great shot into the green and a two metre putt after Kiera’s tee shot went wide and she left her chip shot short.”

Macnab also struggled in the wind, while her opponent went into cruise control.

“Cat was having one of those days when nothing went wrong and she had a sublime round, while Cat struggled with her drives and approach shots,” Greasley said.

“Jordan won the SA Women’s Amateur two years ago and reached the final of the St Andrews Links Junior Open at the Old Course just last week. She has a great match play temperament and we expected her to do well, but she was quite sick when she arrived at the course. Both of them battled incredibly hard to stay in their matches, but Jordan was crippled by nausea and cramping and there wasn’t much Cat could do against an opponent who was just better on the day.

“To have three South Africans in a field of top-quality Europeans and Americans and see all three reach the match play stage was amazing.” – Women’s Golf South Africa President, Sally Greasley

Greasley was extremely proud of the trio’s performances in Scotland.

“Whilst we are all disappointed not to have reached the quarter finals, the players can really hold their heads up high,” she said.

“We came here to qualify for the match play, but we knew it was going to be tough with the calibre of golfers that had entered. To have three South Africans in a field of top-quality Europeans and Americans and see all three reach the match play stage was amazing,” she continued.

“The conditions were pretty difficult with high, gusting winds that really tested our juniors. On a course that was very open in places like a true links, and on other holes, lined with trees, club selection was critical and the ability to hit under the wind. Our girls found this difficult as we rarely have tournaments in these kind of conditions on courses which are this fast and undulating.

“Once again their behaviour on and off the course has been exemplary. On the very first day, a gentleman walked over on the course and congratulated me on such polite and considerate players. They are a joy to be with and great ambassadors, and I couldn’t be prouder or happier,” she ended.

Rothman Returns to South Africa, While Floyd And Macnab Head to Canada

Rothman returns to South Africa on Sunday and will be teeing it up in the Southern Cape Open towards the end of August, while Floyd and Macnab head to Canada with Greasley.

Formerly known as the Commonwealth Trophy, the team event is contested once every four years between South Africa, Australia, New Zealand, Great Britain and Ireland and Canada. This year’s event will be hosted by the Royal Colwood Golf Club from 28 August to 1 September.

Each country is represented by four players and the five countries play each other in a round robin format of foursomes and singles.

Since the inception of the matches, Great Britain and Ireland have won eight times, defending champions Australia five times and Canada twice. South Africa’s best results were third place finishes in 2007 at Royal Johannesburg and Kensington, and in 2011 at Fairhaven Golf Club in England.

Photo 1 Caption: GolfRSA Elite Squad member Kiera Floyd made the second round at the R&A Girls Amateur Championship before she was eliminated at Panmure Golf Club in Scotland. Photo: GolfRSA