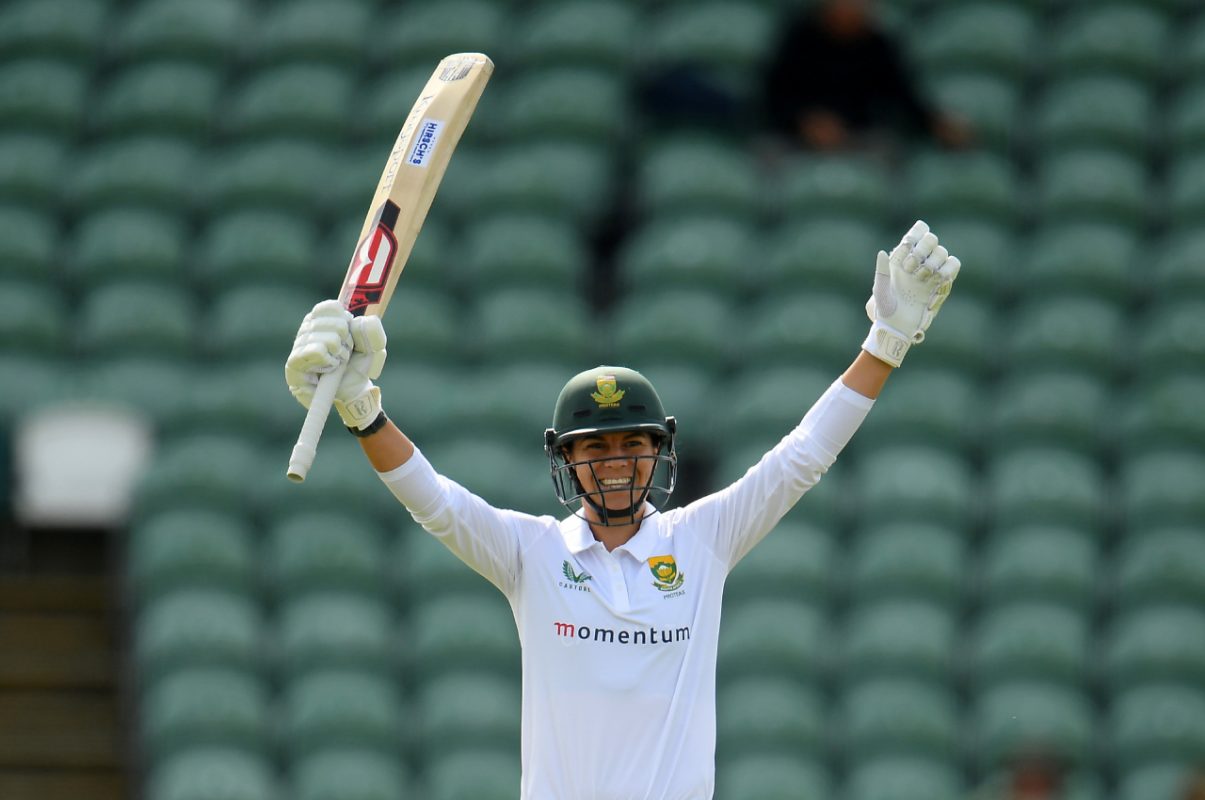 Marizanne Kapp struck a record-breaking century on the opening day of the once-off Test clash between the Momentum Proteas and England at the County Ground in Taunton on Monday, 27 June 2022, with the visitors ending the day’s play on 284 all out after 91.4 overs.

The star all-rounder dispatched an incredible 26 boundaries on her way to 150 off 213 deliveries, to help save South Africa’s blushes after they found themselves 45 / 5 earlier in the day, with Kapp supported superbly in a half-century stand alongside Anneke Bosch (30).

Kapp’s knock meant that she became only the second South African to score a Test century since readmission, while also producing the highest individual score in Proteas Women’s Test history England’s protagonist with ball was Kate Cross with figures of four for 63 in her 17.4 overs, while Lauren Bell took two wickets for 47, with Nat Sciver (1 / 29), Sophie Ecclestone (1 / 33) and Alice Davidson-Richards (1 / 39) as well as Issy Wong (1 / 54) all picked up one wicket apiece.

After winning the toss and sending the Proteas Women into bat, England made early inroads into their opposition’s batting order as the top-order featuring Andrie Steyn (8), Laura Wolvaardt (16) and Lara Goodall (10) as well as Lizelle Lee (0) were dismissed in the first session. Captain, Suné Luus (27) and Kapp managed to add 44 runs for the fifth wicket to take South Africa into the lunch break before the former became Cross’ second victim of the day.

The all-round pair of Kapp and Bosch, after gaining more confidence at the crease, then proceeded to take the attack to the English side, eloquently driving the ball to different parts of the ground to bring up a partnership worth 72 runs before Bosch was removed.

Despite losing partnership Nadine de Klerk (9) and Sinalo Jafta (4), Kapp continued to show her prowess in the middle, going on to steer a 49-run stand with Tumi Sekhukhune (9*) before she was eventually dismissed after Beaumont grabbed a scintillating catch at mid-off off the bowling of Bell.

Sekhukhune and Nonkululeko Mlaba (8) managed to survive for a further five overs as the latter fell on what became the last delivery of the day, with play going past 18h00 local time.

Day Two of the contest gets underway on Tuesday, 28 June from 11h00 local time (12h00 SA time) with England beginning their first innings.

England: Yet to bat.

Photo 1 Caption: Marizanne Kapp struck a record-breaking century on the opening day of the once-off Test clash between the Momentum Proteas and England at the County Ground in Taunton on Monday, 27 June 2022, with the visitors ending the day’s play on 284 all out after 91.4 overs. Photo: Getty Images