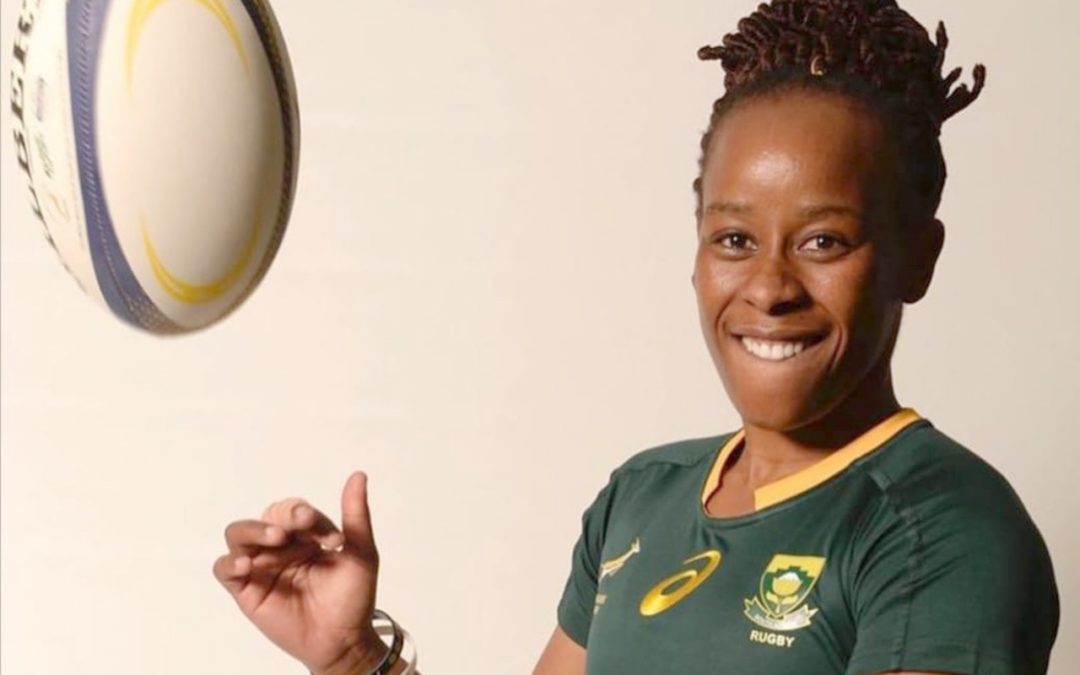 When she isn’t crashing into players on the rugby field, Springbok Women’s Zinhle Ndawonde is saving lives as a firefighter at King Shaka International Airport in Durban.

Ndawonde is one of a select few that have had the honour of representing South Africa at both Sevens and 15’s level.

She has also played in the Commonwealth Games as part of Team South Africa’s Rugby Sevens Women’s team as well as the Rugby World Cup Sevens in 2018.

gsport’s Celine Abrahams chatted to the natural born leader about her journey to playing rugby, dealing with her father’s disapproval and her hopes of women’s rugby turning professional in the future.

Zinhle, over the years you have made your mark on the rugby field, but you also continue to make a significant difference off it as a firefighter. What is it like having to juggle these two careers?

At first, I used to have a problem with having to juggle work and rugby simply because my work had problems with me going away for so long. I would go away for like two to three weeks and I wouldn’t work, obviously still expect to be paid. But, as time went by, they saw and realised that I’m serving the country and not only am I making the country proud but I’m also representing them.

It’s much easier now because they understand that I am a national player, so every time that I must go for camp, they give me special leave. Also, my work and rugby they complement each other simply because they both require physicality, they require high fitness every time so at work we also have a gym so I gym at work and we are tested after every four months to see if we are still in good condition. It makes life easier because I gym at work and when I’m off work, I’m on the rugby field.

Did you get into firefighting before you began playing rugby?

No, I started with rugby and then I joined the firefighting. I started playing rugby in high school; I think in 2006 when I started representing KZN where I played SA games, so that’s where I actually started from and then 2013 that’s when I joined firefighting at King Shaka International Airport.

Were you always interested in playing rugby or even having a career in the sport?

Yes, from a young age I was interested in sport. I studied Sports Management at Durban University of Technology (DUT). Having studied that my plan was to work around the sport environment but due to some background issues and being the eldest at home I had to provide for my family. That’s when I got the opportunity to apply at King Shaka as a firefighter because there were not many jobs in sports, so I shifted to firefighting instead.

What was your family’s reaction when they found out that you were involved in the game, especially as it has always been dubbed a male-dominated sport?

They weren’t so happy at first simply because I would come home with injuries and I would ask my mom to massage me and she would ask, “Why don’t you leave this because every time you come home you are hurt?” And, my dad didn’t approve of it at first because we African ladies, if you are a young girl you must be at home at a certain time. You can’t be home after 17h00 because you must be home to cook. My dad was very strict, so he didn’t want me coming home back late after school because we would have training after school. One of my teachers asked him if I could at least come once a week because my teacher wanted me to play. After my family started to see me progressing in rugby, they then started giving me support.

And your community? Were they acceptive of the path that you had chosen?

I would say that my community were okay with it even those times some young girls wouldn’t understand when I would go to the field in the evening and train with the guys that were playing there. We had a few guys that were playing rugby and I would go and play with them while other girls that were my age walked around the street, looking around for boys. So, they would say that I looked like a tomboy but most of the elderly would really appreciate me and say that I was a good girl because my focus was on getting fit and looking to make a career for myself.

Growing up in the township of Inanda that is known for its social ills, how did sport save you?

It really came to my rescue when it came to my life, also the fact that I lived with my mom most of the time and she used to work away, leaving me with my sister. She was upfront with everything and would tell us that we can’t get pregnant and all of that. So, when I grew up getting pregnant was never an option and being around boys at a certain age. I told myself that I was going to focus on my rugby career and get away from everything else that was happening around me. Rugby changed my life from the age of 16 going towards 18 because that’s when young girls were exploring.

What has rugby taught you?

Rugby has taught me how to be disciplined in order to get the results you want even in real life situations. Also, with the money that I was getting I managed to save to get my mom and sister a house. It has brought a bright future to my life and taught me that we shouldn’t let any situation at home determine who you are or who you will be.

What would you like to see change in the future when it comes to women’s sport in general?

Quite a lot that I would like to see change in women’s rugby. As much as rugby is a male-dominated sport but if we are all in national level, we should all be treated in the same way. We would like to take rugby as a career, something that we can live by and not like now where we have two jobs. Rugby is something that we love but we also want to provide for our families. We would love to see women’s rugby go professional we would like to get more exposure because most people don’t know about us. Have games that will be televised and have sponsorship for women.

The Rugby World Cup will be taking place in 2021. What are you hoping to achieve with the Springbok Women’s team?

We are hoping to go there and perform. By doing that then everyone will start to know that there is a women’s team. We don’t want to go there to add to the numbers, we want to go there to change the perception that people have about the Springbok Women’s team or any sport that is played by women, especially the male-dominated codes. We want to showcase our talents as I believe that our team is filled with talent. Obviously other countries are going to look down on us, so we are hoping to go there and surprise them.

We are faced with global Coronavirus pandemic, meaning that all matches have been postponed and training has been limited to keeping fit behind closed doors. Do you think that this will influence the players, especially as we are uncertain of how long the virus will keep everyone away from fulfilling their duties?

Definitely! It will have an impact because we are all scattered everywhere and as much as we have been given a programme by our conditioning coach but it’s different when you are training alone as compared to when you are together in camp. You would find that you aren’t as fit as you thought you were.

Also considering the situation now, some aren’t privileged to have the space to run and train. But knowing the girls and knowing the direction that we want to be going in, I believe that everyone will have their focus in the same direction, so that when we meet again, we are all ready to go further. To be real, we don’t have much time and this pandemic has distracted the whole system already, but everything happens for a reason.