Jaguars Start Their Telkom Netball League Campaign on a High 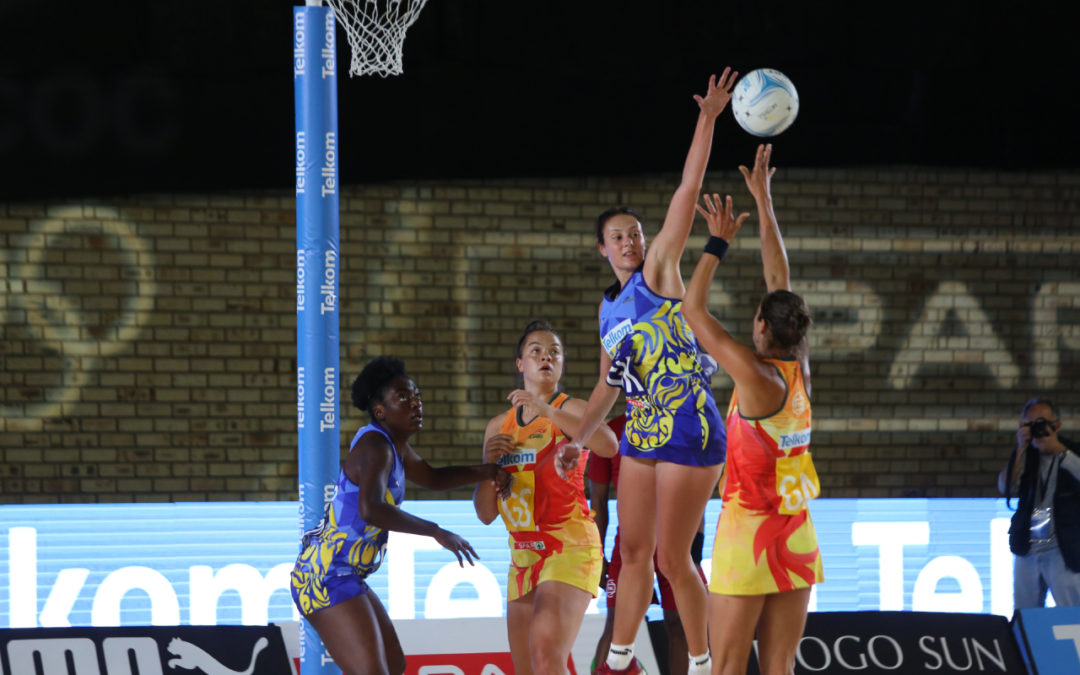 The three-time champions, the Gauteng Jaguars started their 2020 Telkom Netball League campaign on a positive note following a narrow 34-31 win over the North West Flames in the opening game of the tournament in Bloemfontein at the Mangaung Indoor Sports Complex.

The competition was scheduled to get underway in May but had to be postponed due to the Covid-19 pandemic. The defending champions were trailing by 3 goals after the first quarter but managed to turn things around in the second quarter.

Both teams were not going down without a fight after levelling matters at 21 all during the third quarter but the three-time champions proved to be the stronger team registering a victory in their first game. However, Jaguars coach, Jenny Van Dyk was not too impressed with her team’s performance against last year’s semi-finalists.

“I am definitely not satisfied, and I wouldn’t be a Jaguars coach if I were. I think there were highlights and things that they really did well, but I think it was extremely inconsistent. We need to go back, watch the match and make sure that we correct and improve on some of the decisions made on court as quickly as possible.”

The second match saw the Free State Crinums beat the newly promoted side- the KZN Kingdom Stars 40-30. The Crinums’ solid defence in the shooting circle made it difficult for the Stars shooters to get the ball inside the circle but a lot of bad passes also added to their defeat. The Free State based side will be looking to improve in this year’s edition after finishing third last year.

In Division two, the Aloes managed to redeem themselves in the last quarter to beat the Tornadoes 34-29 who are one of the newbies in the competition. The Eastern Cape side were leading 13-5 after the first quarter but received a wakeup call just before the half time break when the Tornadoes closed the gap to 25-22 but the long passes didn’t do them any justice as they started their campaign off with a loss.

Tornadoes coach, Danlee Matthews is still confident in her team and added, “A loss is not necessarily negative in a competition like this, it’s not a sprint but a marathon. So, today’s match gave me an idea of what we need to work on but also gave me a good idea of what’s working.”

The Gauteng Fireballs are in high spirits after winning their opening game in the Telkom Netball League following their 38-36 victory over the Southern Stings. Last year things did not go their way having lost all 8 of their matches in the tournament. It was a very close start to the game, with the Fireballs leading 9-7 in the first quarter but they managed to extend their lead by 8 goals at half time.

The Stings sublime performance in the third and final quarter proved why they made it to last year’s final. The Western Cape team’s combination in the shooting circle made the Fireballs nervous in the dying minutes of the game but time was not on their side to equalize as they lost by just 2 goals.

‘’This is the start we were looking for, not as clean as we wanted it to be’’, admitted Fireballs coach Dumisani Chauke after the game.

‘’It’s a great start, we will take the win as scrappy as it was, and we will get it right’’.

Meanwhile Stings coach- Annelie Lucas says her team needs to stay focused in the competition and also added, ‘’You don’t win this tournament in the first quarter, you have to keep the composure until the last day. I am sure that these girls are hungry enough to show the people that they can really push through and win this.’’

In Division two, The Kingdom Queens are pleased with their positive start to the TNL after beating the Limpopo Baobabs 42-34. This is the Queens first appearance in the competition and the KZN side will be hoping to maintain their winning momentum throughout the competition. The Baobabs only finished third last year and will look to turn things around in their next game against the Aloes tomorrow afternoon at 5.

The SA U/21 side won 32-31 against the Flames in the last game of day one. The SA side will be playing exhibition games in this competition as part of their preparations for next year’s Netball Youth Championships. DR Elsje Jordaan coaches both teams but Flames assistant coach- Kealeboga Mabeko took charge of this specific match.

Photo 1 Caption: Jaguars vs Flames in the first round of the 2020 Telkom Netball League. Photo: Supplied