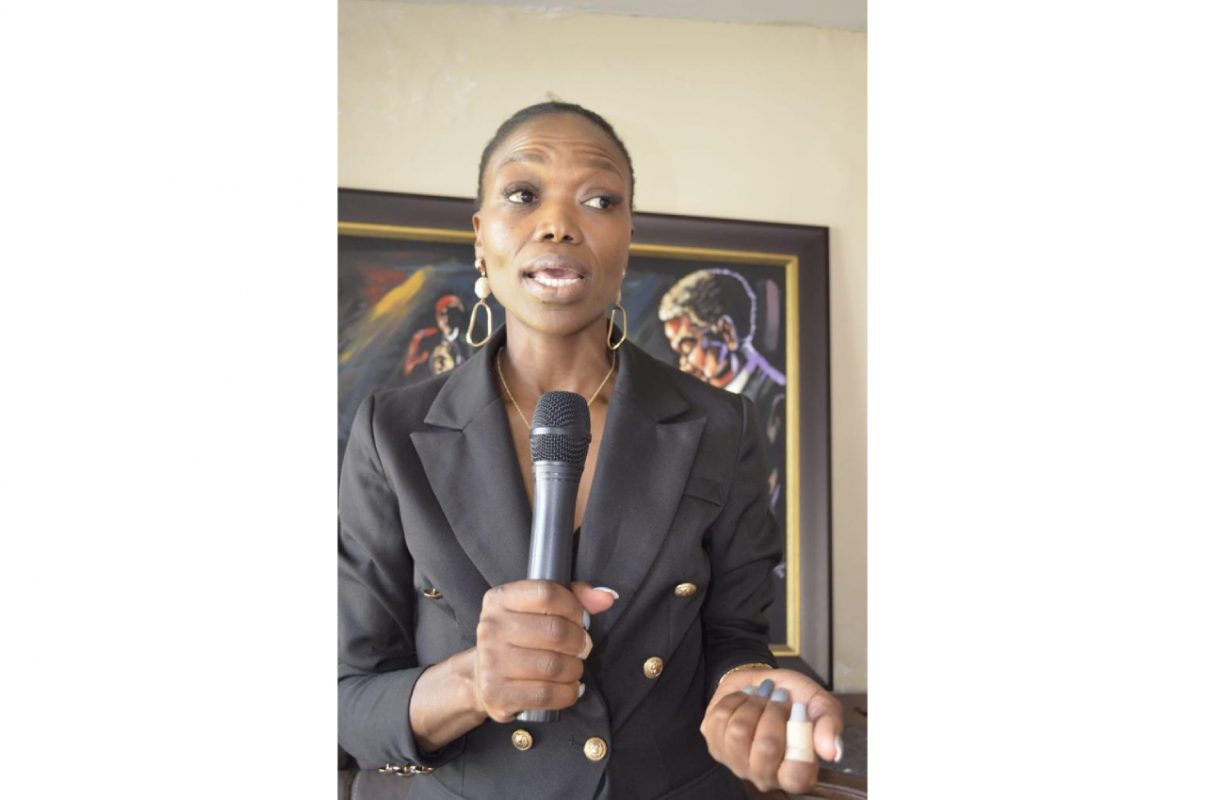 Central Gauteng Athletics Vice President Karabo Mabilo is passionate about facilitating the development of young and upcoming talent as she says her tenure will see her increase women participation in the sport, both on and off the track.

Mabilo was recently appointed as Vice President and reveals that her appointment signifies hope and victory for all women in athletics that women are ready to lead.

Her mandate is to take the federation to greater heights by using her professional knowledge to add value in the province, paying more attention to the governance and compliance of the federation, and to also solicit sponsorships and build relations with corporates, businesses, and stakeholders.

Another project which the Tax and Fiduciary Specialist is excited about is leading the Women’s Committee which focusses on the development of women in sport and capacitating them.

One of the initiatives they are driving is the hygiene towel pack (sanitary towels, soaps, deodorants, face clothes, etc) which looks at ensuring that no girl child or women in athletics is left behind because of basic needs.

She says the aim is restore the dignity of a girl child/young woman to continue to participate in sport.

Speaking with Tlamelo Kganakga, Mabilo chats about closing the gender gap in leadership and reveals the importance of women backing each other.

Karabo, thank you for chatting to us. Please tell us more about yourself.

I am from the West Rand, Krugersdorp (Mogale City) by residence. However, I was born in Soweto, grew up between Molapo in Soweto and Kagiso in the West Rand. I am a mother of two (boy 15 and a girl 10).

I have an Accounting, Tax, and Law qualification. I am employed as a Tax and Fiduciary Specialist, working for one of the large Banks. I am juggling between being an employee and serving my legal articles through the Law School.

I am an avid runner, completed 4 Comrades Marathons, 3 Two Oceans Ultra Marathons and plenty other races over the years including the Soweto Marathon.

I was always active even when I was at Princess High School, especially in Track events, and played Hockey. I took a break from sport after completing my matric, and then later I joined the gym.

It was only after my daughter was born in 2011 that I wanted to burn the baby fat, so I went back to the gym and road running. Later the running bug bit, I ran my first Total Sport 10kms Ladies run in August and decided to join a running club.

You were recently appointed the Vice President of Central Gauteng Athletics. Please tell us about your position and mandate.

This position signifies hope and victory, not only for me but for women in athletics, that women are ready to lead. The mandate is to take the federation to greater heights, to facilitate in the development of young and upcoming talent. It is imperative that we nurture and cultivate talent, especially that of young adolescent girls.

As Vice President, with the support from my President and the Board members, my task is to ensure that Central Gauteng Athletics builds and retains relationships with corporates, business, and stakeholders. We are on a drive to solidify our presence and ensure that corporates collaborate with Athletics again.

The President also nominated me to lead and oversee the Women’s Committee. This a continuation of what I was focused on in my previous tenure as an additional board member. The mandate in this committee is something that I’m very passionate about, being the development of women in sports and capacitating them. One of the initiatives we have been driving is the hygiene towel pack (sanitary towels, soaps, deodorants, face cloth) which looks at ensuring that no girl child or women athletics is left behind because it’s that time of the month. The aim is to restore the dignity of a girl child/young woman to continue to participate in sport.

There are other initiatives in this committee which we are introducing such as overall wellness of athletes. This will focus on mental wellness, financial wellness, etc.

What were you doing before being appointed for the CGA Vice President position?

I was a Board Member in Central Gauteng Athletics structures and I serve as Trustee on the Soweto Marathon Trust Board. At the time I was also focusing on completing my LLB degree.

In your opinion, why is it important for women to take up leadership roles especially in sport?

Unfortunately, sport in general is dominated by males and women face patriarchy in all spheres in any event in South Africa. There is a heritage of brotherhood which continues to see power and positions passed down from generation to subsequent generations of men, therefore it is high time that we as women insist by way of support of course, on having a seat at the table. We must break the patriarchal chain, and this starts with women that still hold strong views about the dominance of male leadership.

In South African women face the barrels of buoyant sexism daily, be it at work or at home. We are monitored and judged by our dress code, how we speak, the amount of cuss words that we utter, or even the volume of alcohol we consume at social events. Athletic administration is still dominated and reserved for men. The justification for this narrative is that ‘women aren’t really into sport… that much anyway.’

Women just like their male counterparts are capable and I strongly believe that positions should be awarded on merit and not in the basis sex of an individual.

What are the challenges you have faced in your career and how did you overcome them?

In my career, I have been blessed in that the process of appointment of positions has always been based on merit and this instance the competition when it comes to appointment is standard, being a fair interview process. The challenges have been minimal in this regard.

Generally, we as women don’t embrace each other and my view is that if we can break that cycle of negative criticism or gossip, the world would be our oyster. We should always continue to support each other.

What has been the highlights of your career so far?

In the short term, completing my LLB in record time and being voted in as Vice President of Central Gauteng Athletics.

What are you hoping to achieve in your position as VP?

I hope that during my tenure I will successfully assist in increasing the development and participation of female athletes and using my professional knowledge to add value in the province (CGA) by paying more attention to the governance and compliance of the federation. To also solicit sponsorships and build relations with corporates, businesses, and stakeholders.

I will also ensure that our Women’s Committee hygiene/sanitary pack drive becomes the most successful initiative to ensure all the females (young and old) regain and retain their dignity.

Currently, I am fan of Gerda Steyn and Irvette Van Zyl, the two ladies are making waves internationally. Their will power to push boundaries and work as hard as they do is admirable.

I look at the amount of effort these women runners put to ensure that they are ready to make the podium all the time.

I am also a big fan of the Phalula Twins (Lebo Phalula and Lebogang Phalula – Lithuli) who are also my friends. Their story is remarkable from development athletes to dominating SA championships for years. These ladies are not just athletes, they are WIVES, MOTHERS, COACHES, COMMUNITY BUILDERS who juggle all these responsibilities and still make time for their own training. They are currently on a journey to start up a foundation to benefit the young athletes. Still, at every race they participate in, they leave their foot prints and hard-earned training on the road each time.

What’s the one advice you’ve been given that you hold onto?

What’s your advice to aspiring women in sport who want to take leadership roles?

As a woman leader we must use the stairs/ladder to get to the top and allow others to follow you.

Leadership is not about being a push over, it is earned. Let your work speak for itself.

My partner always reminds me that a great leader does not take the stage and speak about her work, her work follows her to the stage.  And lastly as women, we must remember that we deserve the seat at the table. There is sufficient space for all of us.

What do you think can be done to close the gap (between men and women) where leadership roles are concerned in SA?

Leaders, particularly male leaders must be honest with the fact that gender diversity is not encouraged. We should not ignore the fact that there is serious gender stereotyping and gender bias that must be deliberated on.

We must look at how we perceive and address each other, draft, and implement policies that are gender neutral and most importantly, do away with the gender narrative that seems to be perpetuated.

Equality – to see all women treated equally to their counterparts. I can’t wait for the day that we as women collaborate and carry each with minimal criticism to the top.

Photo 1 Caption: Central Gauteng Athletics Vice President Karabo Mabilo is passionate about facilitating the development of young and upcoming talent as she says her tenure will see her increase women participation in the sport, both on and off the track. Photo: Supplied