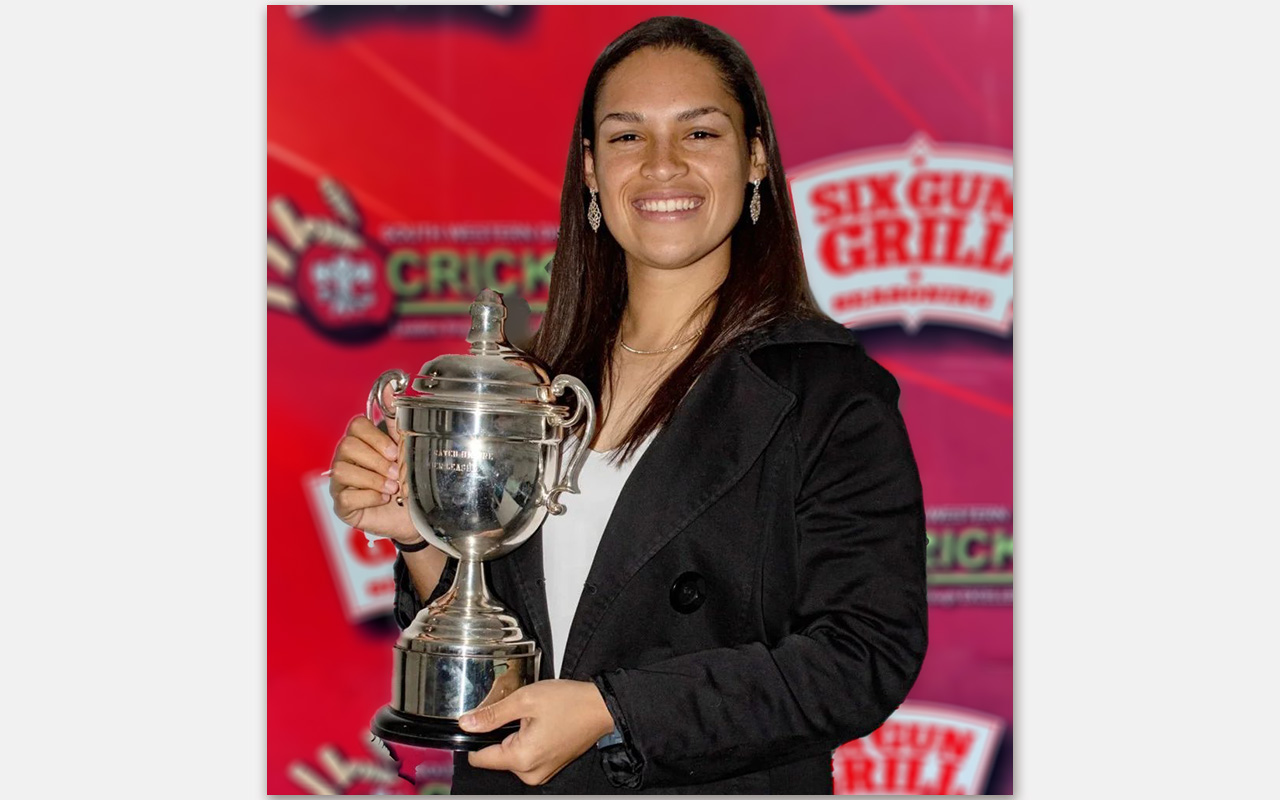 South Western District Umpire, Kerrin Klaaste was honoured with Umpire of the season Award by SWD Cricket on 9 May 2022.

Klaaste became the first female to officiate in a league final at the Six Gun Grill SWD T20 and to add to that ‘first female’, she is the first to be honoured with Umpire of the season accolade.

The Kimberly born has admitted that this award shows growth and how she accepted opportunities that presented themselves.

Not only was she awarded the award, Klaaste also recently graduated for Bachelor of science degree in Data Science.

Speaking with Tlamelo Kganakga, Klaaste shares an update on her career to date.

Kerrin, Congratulations on being the SWD Umpire of the Season. How does it feel to be honoured, especially being the first female from the Union?

Thank you so much!

Honoured would be an understatement because I genuinely do not believe that I’m the best candidate within our union, however I do believe that accepting opportunities presented to me have contributed towards this accolade. The gentlemen alongside me at SWD have massively contributed to my growth. As for it being another female first for the union, I am humbled.

What does it mean to be recognised and how important is recognition for what you do?

Just recently I had been to a tournament where my biggest challenge was deciding between working towards earning the respect of players or simply getting the job done to the best of my ability. I had chose the latter and automatically the respect followed.

When it comes to recognition, give credit where it’s due, always. You’re simply doing yourself an injustice by undermining someone else and trying to find fault by them. This is the typical mindset of players when things do not go their way.

Once more congratulations on your recent graduation. Please tell us more about it and how you kept balance between being a cricket umpire and studying?

Thank you so much. I’ve recently graduated and obtained my undergrad Bachelor of science degree in Data Science – it’s a combination of math, stats and computers. It wasn’t the easiest nor the quickest route, but the determination to obtain a degree was the driving force behind completing my studies.

There was always conflict between studies and sport throughout my life, but I appreciate my parents pushing me to make the sacrifices and build towards a life for myself and not my hobbies – those would naturally follow when I was ready to focus my attention on it. Now that I’ve gotten my degree, I’m in a position to shift my focus on building an umpiring career.

As cliché as it sounds, what’s meant for you will make its way to you so I’ve ran my own race, at my own pace all with God’s grace.

What else do you still want to achieve in your career?

My goals have remained the same although this time I’ve got more time to invest in my umpiring. I’m keen on getting involved as a trainer as I firmly believe that this would help me understand my laws a lot better.

Traveling abroad is definitely on top of that list too.

What do you think should be done to close the visibility gap when it comes to cricket umpiring?

Blue flag clubs have set criteria that they need to comply with in order to qualify as a blue flag club. In the same way, this principle applies to premier league teams and their participation in the premier league. Unions should then be treated the same way and have prerequisites for there to be a certain percentage of female to male Umpires within their union. This can then be filters all the way up through the pipeline.