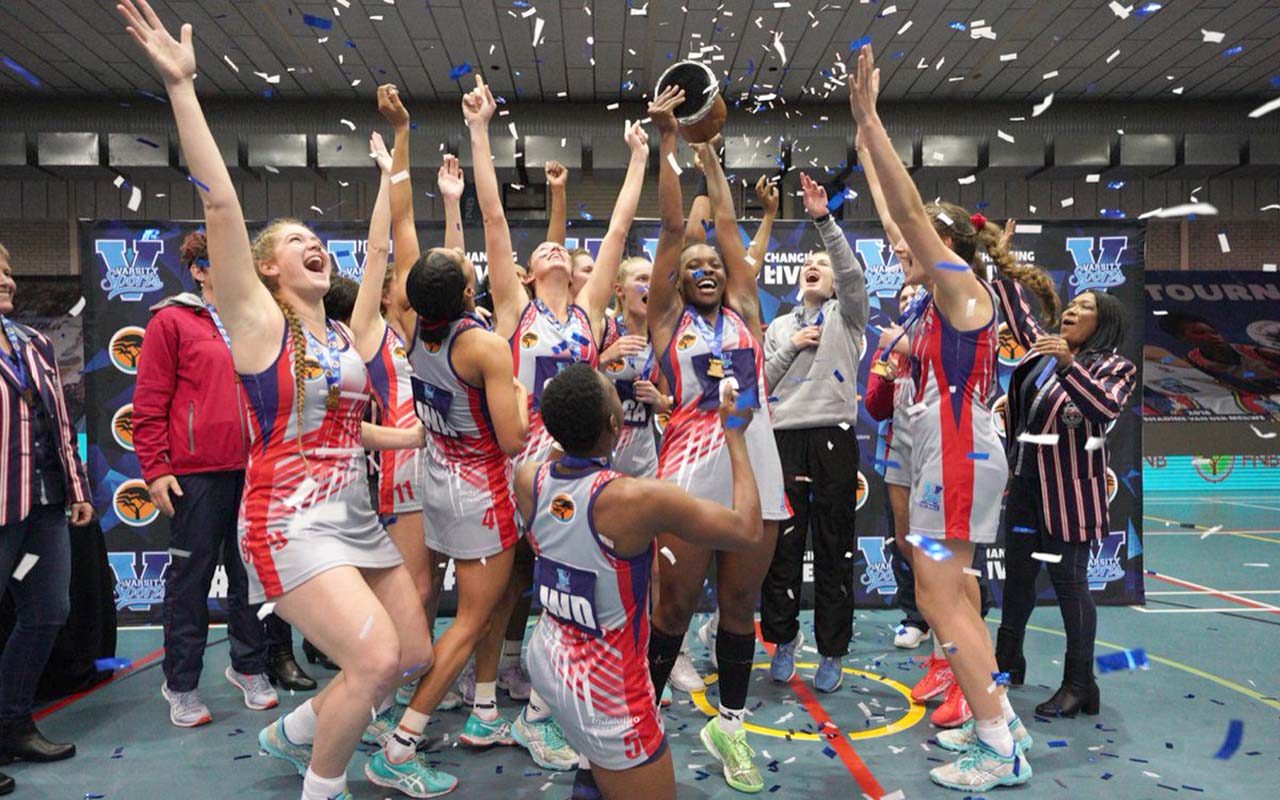 The University of the Free State’s Kovsies recorded a convincing 55-39 win against tournament hosts Maties in the 2021 Varsity Netball final at the Coetzenburg Indoor Centre on Monday, 30 August.

Maties, on home turf and taking to court with war paint on their faces, went into the final as the only undefeated team in this year’s tournament, but they were up against the most successful team in the tournament’s history. And the Free State students showed them why, never veering from the game plan so carefully constructed by coach Burta de Kock.

Kovsies were on the front foot from the first whistle, putting pressure on every Maties centre pass and turning over possession that showed on the scoreboard. Khanyisa Chawane played a crucial role here, with good offloads into the circle for goal shooter Claudia van den Berg. This put them 11-10 in the lead after the first 15 minutes.

Maties started the second quarter having to play catchup for only the second time in the tournament and the pressure clearly showed. They weren’t able to protect their own ball and the errors started to creep in. They also couldn’t capitalise on the high penalty count from Kovsies, and slipped further behind at half-time, 23-20.

With her team looking comfortable and dictating play, De Kock stuck with the same seven players while Maties coach Zanele Mdodana rang the changes, trying to do something different to steer the match in a different direction. All to no avail, though, as nothing they threw at Kovsies threw them off track and the Free State team were still in front at the end of the third quarter, 34-30.

Maties pinned their hopes of a comeback on the Power Plays in the last quarter. But it was Kovsies who came out on top in both two-minute periods, stretching the lead even further and putting one hand on the trophy well before the final whistle.

There was no fairytale ending for Maties, while Kovsies proved that it doesn’t matter how a team starts a tough tournament like this, what matters is how it ends.

An elated De Kock praised her team for their monumental effort during the past week, saying they never stopped believing in themselves and gave it their all when it mattered the most.

In the earlier match, Tuks salvaged some pride when they beat NWU 62-48 in the third-place playoff. This after the Pretoria-based team and defending champions had been beaten by the same opponents on day one of the tournament.

There wasn’t too much to choose between the two teams during the first half of the match. Both stuck to their game plans and played to their strengths. The score after the first quarter was 12-12 and 27-27 at half-time.

The all-important third quarter proved to be the turning point of yet another match. NWU were dealt a heavy blow when their inspirational captain Jessica du Plessis had to be carried off the court, clutching her right ankle and clearly in agony. It is believed to be a serious injury that could jeopardise her participation in the Proteas’ tour to Jamaica in October. The Potchefstroom-based team lost another key player when Caitlinn Rousseau left the court in tears with an injury.

Tuks then turned up the heat and began to pull away, putting their clearly disrupted opponents under pressure. Alice Kennon and Danielle van Zyl started to dominate in the goal circle and outplayed their defenders. This enabled Tuks to end the third quarter with a comfortable 44-37 lead.

NWU staged a brief comeback at the start of the final quarter, scoring four unanswered goals. However, Tuks held onto their lead and when the final whistle went, their delight was evident, even more so for goal attack Danielle van Zyl who was named FNB Player of the Match.

Final Results of the 2021 Varsity Netball Final at the Coetzenburg Indoor Centre on Monday, 30 August:

Copy and photo by Varsity Sports, with editing by gsport