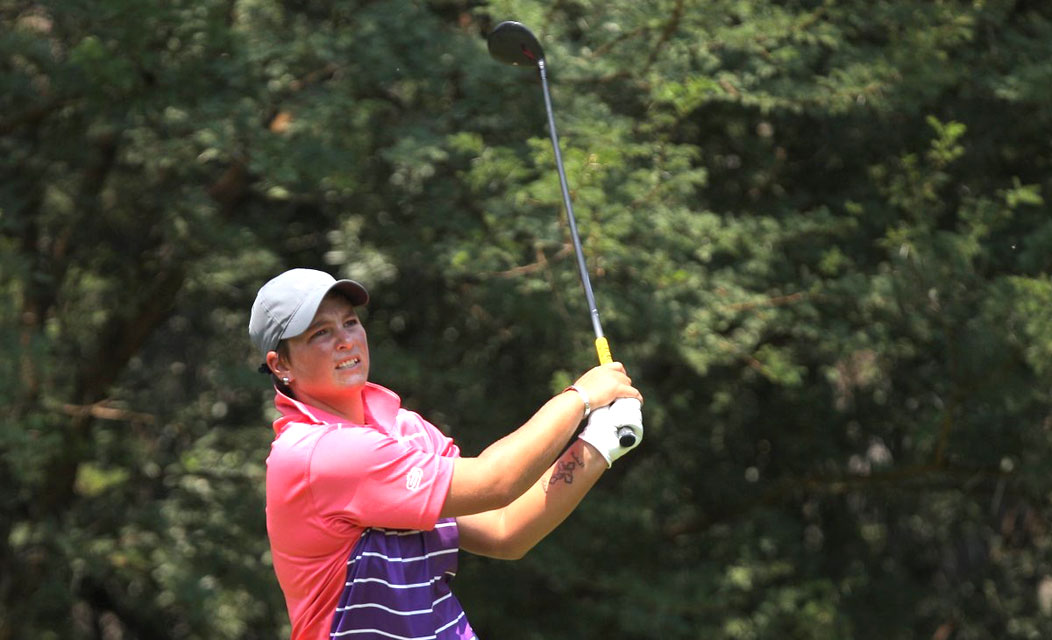 Bonita Bredenhann from Namibia continued to shine in the Sun International Ladies Challenge, but Serengeti golfer Lejan Lewthwaite stayed in her shadow as action wrapped up Tuesday’s second round at the Sun City Resort.

Bredenhann and Cecilie Lundgreen from Norway led the first round at six under, but the big-hitting Namibian was the only one left in pole position at the Lost City Golf Course after she carded a two-under-par 70.

She leads on eight under 136, one shot clear of Lewthwaite, who matched her 70.

The 24-year-old from Hentiesbaai is bidding for a maiden win on the Sunshine Ladies Tour, but she will have to fend off Lewthwaite, who is also hunting a breakthrough win. To add to the pressure, both players are fighting for survival in the Chase to the Investec Cup for Ladies.

Bredenhann and Lewthwaite are respectively ranked 15th and 12th in the Points Standings. Victory at Sun City ahead of the final counting event – the Ladies Joburg Open starting on Sunday – would give either player a leg-up to make the top 10 list that qualify for the season-finale at Millvale.

“I knew coming into this week that I had nothing to lose and that had a huge influence on how I approached the course,” said Bredenhann. “Instead of going with the driver to take advantage of my distance off the tee, I went with the hybrid and gave myself longer irons into the green. I’m really accurate with the hybrid and I didn’t miss many fairways in the last two days.

“Even at the par fives, which I would usually go for in two, I elected to lay up and rather make sure of the birdies. I’m really calm this week and I’m taking that nervousness that normally trips me up and turning it into positive energy.

“The greens are still very receptive. I’m confident that I can make the putt if I can hit it anywhere inside 12 feet, so striking my short irons and wedges really well and having a hot putter in the bag has helped, too.”

While Bredenhann mixed five birdies with three bogeys for her 70, Lewthwaite reversed a double bogey at the second with a trio of birdies on the front nine. She dropped another shot at 14, but bookended her back nine with two further gains.

“It’s nice to come into form right now, so close to the end of the season, but I think it’s more a mental thing that my game,” said the Benoni native. “I’ve been playing well for weeks, but I’ve put far too much pressure on myself. I think my expectations were too high, and like Bonita, I teed it off in the first round thinking I’ve got nothing to lose.

“The mental switch has been good for my game and I’m really playing solid golf. We had a great time on the course today with a lot of banter and we were egging each other on all day. Hopefully the putter heats up even more in the final round and we can have a good old tussle for the title.”

Buhai, who started the second round in a tie for third with Lewthwaite, carded a 71 to finish at six under, while Tandi von Ruben – the winner in 2014 – is a further stroke back.

Von Ruben held a share of the lead at nine under with Bredenhann after she boxed three birdie putts in a row from the 11th, but a costly triple bogey at the par four 16th and a bogey finish saw the Randpark golfer sign for a 71 that dropped her to five under 135.

Lundgreen moved to fifth at four under after a 74 and Chase to the Investec Cup leader Kiran Matharu finished at 141 after a 73. Two-time Ladies European Tour champion Kylie Henry from Scotland, South Africa’s Melissa Eaton and Lauren Taylor from England are two under.

Photo 2 caption: Also hunting her breakthrough win was Serengeti golfer Lejan Lewthwaite, with both her and Bredenhann fighting for survival in the penultimate counting tournament for the Chase to the Investec Cup for Ladies. Photo: Sunshine Ladies Tour

Photo 3 caption: Adding to the pressure is SA no. 1 Ashleigh Buhai on 138 just two shots off the leader, who impressed with opening rounds of 67 and 71. Photo: Sunshine Ladies Tour

Photo 4 caption: 2014 winner Tandi von Ruben held a share of the lead with Bredenhann with three birdie putts in a row from the 11th, but a costly triple bogey at the par four 16th and a bogey finish saw her sign for a 71 that dropped her to five under 135. Photo: Sunshine Ladies Tour