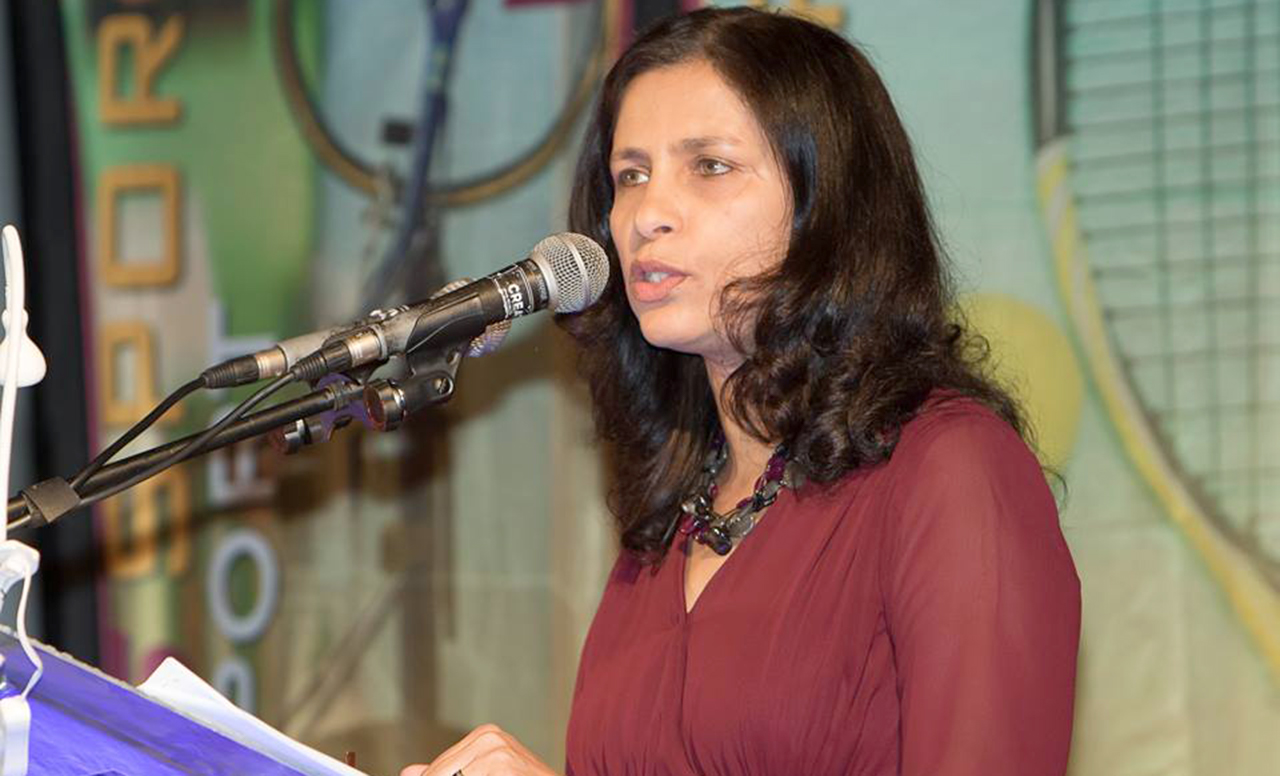 I grew up in Keimoes, a rural area in the Northern Cape Province of South Africa – an area that provided many opportunities to play in open spaces, invent our own games, to design and produce our own equipment. Since my primary school days my favourite codes remain athletics, cricket, football, netball and volleyball.  My choices then were athletics and netball.  Long-distance came quite naturally because, back then, there were no cars or taxis to get us to the one main road of our small town to the shops.

My memory of that time isn’t filled with feelings of discrimination – perhaps only because of the limited number of codes women and girls were exposed to; and because we were presented by society and from the outset at school with the “unquestionable fact” that no girls played cricket, football or rugby.

Still this societal myth-turned-fact contributes towards the exclusion of women in their choice of codes.

I wonder if I would have chosen any of these sports if I could?  Probably I would not have chosen a code that would have caused any bodily harm!  Perhaps this thought is supported by the “fact” that girls were “not supposed” to get hurt – another societal myth that needs revisiting to enable girls to make their own choices.

History shapes who we are and how we experience people, spaces and developments around us. For many, we have a shared history that we would have wanted to rewrite – not only for us back then, but also to develop a new narrative that speaks to a better future for women and girls in sport.

There are many direct and underlying factors regarding women’s under-representation in sport participation, coaching, technical, leadership and managerial positions. In my experience there are three factors: societal, organisational and individual. With age comes experience, expertise and wisdom, and I now add traditional gender roles, organisational culture and women’s perceptions and competencies to the list of contributing factors.

The accepted view is that women and men are biologically different; and usually culture and society shape and strengthen gender roles. The traditional role of men is to support their family and the role of women is to take care of children and home. Traditionally, men are considered more aggressive and women more nurturing. Stereotypes of women and men’s characteristics and roles in society still exist strongly. (Piha 2006, 89.)

However, everyone has their individual characteristics and strengths. By stereotyping men as more likely to achieve at work, the important and valuable characteristics that women have remain undervalued (Piha 2006, 92). Stereotyping slows down change and acts as a major obstacle when it comes to women’s career possibilities.

Historically patriarchal organisations were formed that had power in decision-making – including deciding what is good for women. Not allowing women to the table has led to our exclusion in so many fields, not just sport. This began with the division of the labour market by gender that systemically skewed equality and women’s development in all areas of life.  Still today the lack of support and networks force women to craft their own ways to success.

How Does a Woman Achieve Success?

The way in how we as individuals respond is informed and shaped by our society and cultures, including organisational culture. Points that I would like to mention, demonstrated through research as well as my personal experiences, are:

– Individual choices:  These have a life-time impact and because we didn’t have these choices, it has led to the huge under-representation of women in codes such as boxing, cricket, cycling, football, rugby, to name but a few.

– Education:  This is of great importance for the role that women play in society and relevant for leadership positions in sport.  Having more women in leadership positions contributes to a more equal workplace and improves diversity for better organisational performance.

– Additional attributes:  A study done by McKinsey & Company in 2008 demonstrates that based on nine dimensions and leadership behaviours, on average women use five of these 9 behaviours more often than men.

My Lens of Experience

Societal factors remain our biggest challenge. These are so deeply engrained and influence organisational and individual behaviour and are the hardest to change.  However, the emancipation of women, led in struggle, did open the way for change.

Organisational culture is shared in the workplace and either holds it together, or divides it – along gender lines, for example. The various sport environments that I have been involved in have different cultures. With university sport the rise of women is a natural progression. But not so in rugby and it will probably remain unchanged for the next decade.  Currently female representation at playing level, leadership, coaching, technical, medicine and sport science roles at franchise, union, club, university, etc. levels has not even reached 20%.

There are other factors that have silently affected the advancement of women in sport – ones we are reluctant to raise – and at times I am a culprit and a victim too.  I have endured the thinking that I was not “black enough” to take up a specific leadership position. I wasn’t seen as a woman who has come through the ranks filled with challenges, who had seized opportunities and who had the commitment, drive and passion to make a difference.  This, is called “racism”.  Other factors include silently (and obediently) allowing men to play us off against each other for key positions. We should be saying: “We are both ready, so make space at the table as it should be!”

How do we Change the Narrative to Advance Women in Sport at All Levels?

Today the South African population is represented by 51% of women, thus making us the majority.  So let us for a minute consider, that if our democracy was based on gender, we would be the decision-makers.

Imagine a South Africa where participative decision-making, role modeling, inspiration expectations and rewards, people development, intellectual stimulation, efficient communication, individual decision-making and control and corrective action is the norm, empowering all of us continue to draw strength from a past changed by many women across the globe.

I watched “The Conductor” that tells of the story, journey and current challenges women face in the music world.  A prominent woman in this film is Eleanor Rooseveldt, who said to Antonia Brico: “Do what’s in your heart because you will be criticised anyway.”

This is one of the mottos that continues to inspire me.

In conclusion, let the history of where we come from, who we are, the struggles fought by many and the numerous examples today of phenomenal women in our lives who continue to take up the challenges, continue to shape a future filled with possibilities … because like it or not, a luta continua!

Photo 1 caption: Chief Director of Sport at Stellenbosch University and President of USSA, Ilhaam Groenewald writes on the factors that contribute towards under-representation of women in sport. Photo: Supplied

Photo 2 caption: Adopting the advice of Eleanor Rooseveldt to Antonia Brico to do what what is in your heart – for you will be criticised anyway, Groenewald advocates key strategies to counter the many factors that stand against representation of women in South Africa’s sports landscapes. Photo: Supplied

Sport leadership is my passion| University sport is my focus| Change for empowerment is my vision| Important to Live, Love and Laugh.