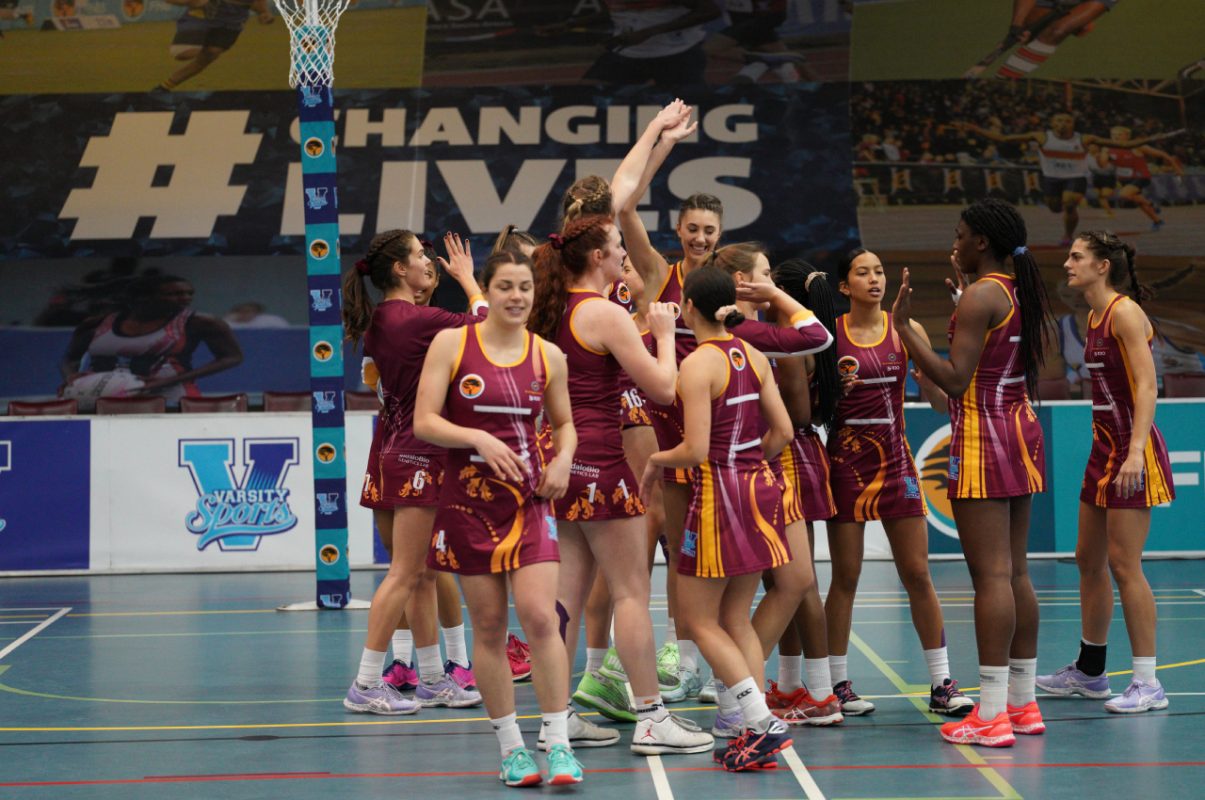 Maties and Kovsies will contest the Varsity Netball final at the Coetzenburg Indoor Centre on Monday, 30 August 2021, at 19:00 on SuperSport Variety 4, DStv channel 209.

Unbeaten throughout the 2021 Varsity Netball edition, Maties beat defending champions, Tuks 62-53 in the first semi-final on Sunday to book a first-ever home final, and third overall, before Kovsies fought back from a four-goal half-time deficit to edge the NWU Eagles 66-65.

Maties will be confident going into the decider after beating Kovsies by eight goals on day one of this year’s tournament in Stellenbosch. However, Kovsies will have the experience of having won all three Varsity Netball finals they have competed in since 2013.

Maties laid the foundation for their victory in the first quarter when they took a comfortable 19-9 lead. Tuks launched a comeback in the second quarter, scoring 15 points, but Maties did too and went into half-time 34-24 ahead. In the third quarter, Maties only outscored their opponents by one point, but stayed in front, 52-41.

It has been a remarkable performance by Maties on home turf throughout this tournament, and Sunday’s encounter against the defending champions drove this home. While no spectators are allowed due to Covid-19 regulations, Maties must have been inspired by the champions from the past that looked down onto the court from a huge banner in the stands.

The defensive efforts of Maties once again played a crucial part in their victory. They pounced on Tuks’ errors and established vital turnovers that were converted into much-needed points to maintain a healthy lead throughout the match. Syntiche Kabuya was simply outstanding in this regard and rewarded with her third FNB Player of the Match accolade in her first year of Varsity Netball.

Tuks coach Jenny van Dyk brought star defender Jamie van Wyk on in the second quarter, and made a couple of other positional changes, but it was a case of too little, too late. The communication between the Tuks players was poor and this led to bad ball placement. When they did manage to turn over possession from Maties, the attacking players didn’t come forward to fetch the ball.

The normally cool, calm and collected van Dyk was animated and expressive, jumping out of her chair and seemingly frustrated with a couple of umpire decisions.

Maties coach Zanele Mdodana was overwhelmed with emotion when the final whistle blew. Twirling a talking stick, a special gift from captain Sian Moore, in her hands, Mdodana said she was extremely proud of what her team had achieved after a year with many ups and downs.

Kovsies had to battle to the last second for their one-goal victory over NWU in the second semi-final. It was a much more closely contested match from the one between the teams two days ago, which Kovsies won by 24 points.

NWU put Kovsies under pressure from the outset, which enabled them to lead 15-13 after the first quarter and 34-30 at half-time. But Kovsies showed their mettle in the all-important third quarter to go ahead 49-47.

NWU stayed in control of their own ball during the first half, not rushing play and taking their time in driving the ball through to their goal circle. Here the height of Elmeré van der Berg (1,94m) was vital, while her ability to shoot from anywhere within the circle put the defenders on edge.

However, one should never underestimate the ability of Kovsies coach Burta de Kock to manage her players in pressure situations, keep them focused on the end goal and to not stop playing until the very end.

Bringing on Khanyisa Chawane in the third quarter was a brilliant move as the centre court player immediately made her presence felt with a handful of brilliant intercepts. Chawane was deservedly named as FNB Player of the Match.

De Kock was overjoyed with the brilliant display of netball in this tough encounter. She attributed the victory to their consistency throughout the match and the fact that her players trusted each other to pull it through in the end.

Earlier in the day, TUT beat UWC 49-42 in the seventh-place playoff, with TUT goal shooter Pretty Msiza named the FNB Player of the Match. The Pretoria team also beat their Cape opponents in their round-robin encounter.

In the playoff for fifth position, UJ claimed a 57-44 victory over the Madibaz, a similar scoreline to their match earlier in the week. UJ’s Monica Gomases received her third FNB Player of the Match award at this year’s tournament.

Photo 1 Caption: Maties during the Varsity Netball match between Maties and Tuks at Coetzenburg Sports Centre in Stellenbosch on 29 August, 2021. Photo: Varsity Sports