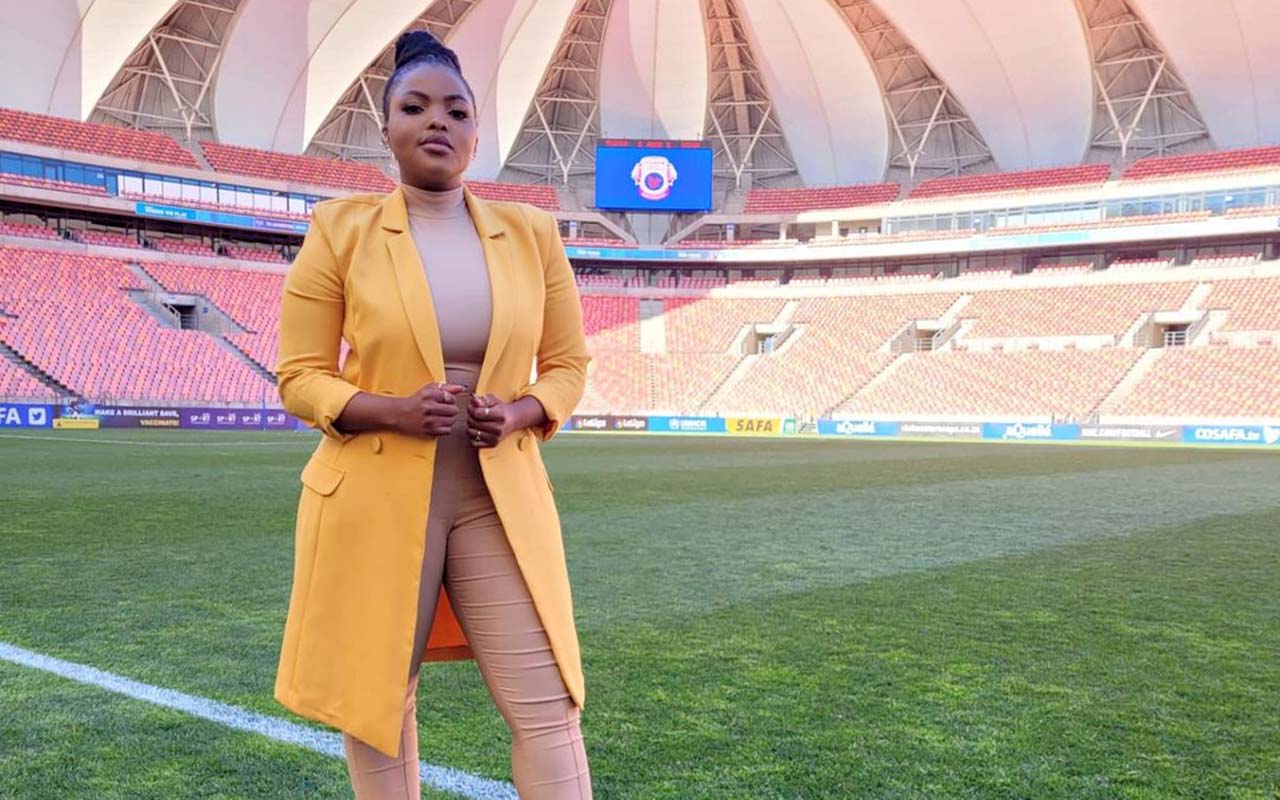 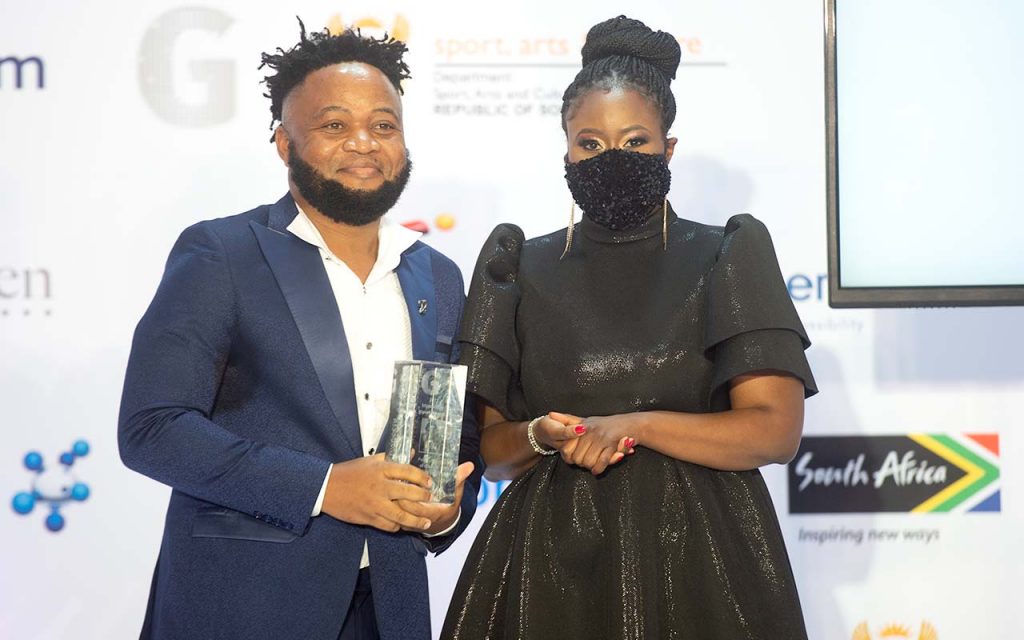 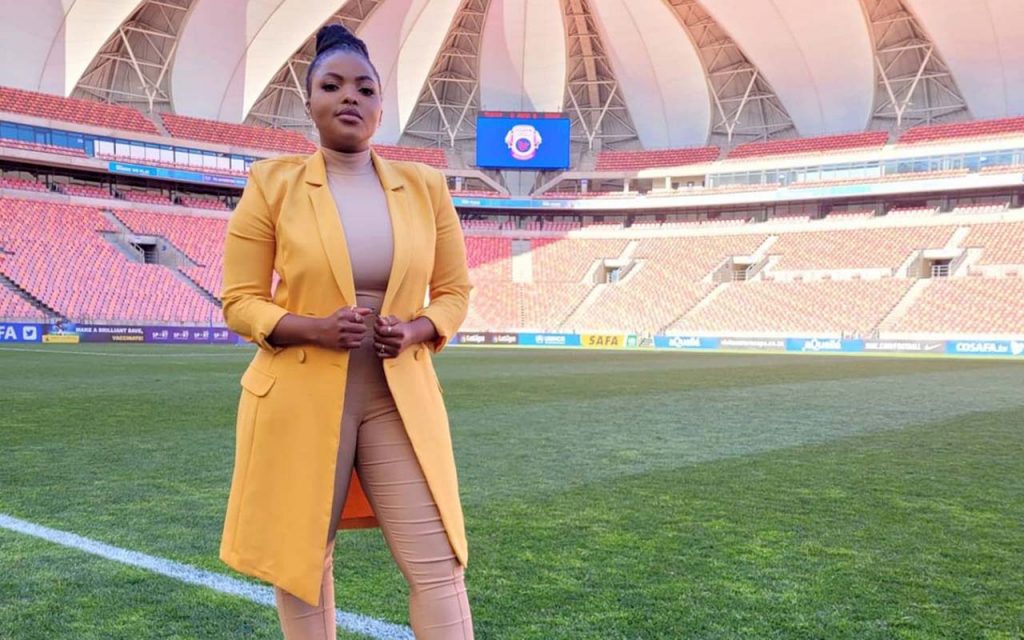 Winning the 2021 Momentum gsport Awards Public Choice accolade was something that Mbalenhle (Mbali) Sigidi never saw coming. Now, she is determined to build on this platforms as she eyes greater horizons in broadcasting.

Sigidi, one of Mail & Guardian’s Top 200 Young South Africans 2019, represented South Africa as a journalist in Uruguay for the FIFA U17 Women’s World Cup in 2018, and has been steadily racking up the highlights as she rises up the ranks.

Speaking about being a #gsport16 winner, she says it is a privilege to be among such esteemed women, who are breaking barriers in the sports industry

For Sigidi, sport has always been in her DNA as she was raised by a family that couldn’t resist being couch potatoes. Since she started school until her matric, Sigidi played sport. Athletics, Basketball, Netball and Cricket are one of her favourites.

She dreams of making it across boarders and work internationally for the likes of Sky News, ESPN, FIFA. But first, she would love to host CAF Awards.

Speaking with Nonto Nothana, Sigidi shares what it was like for her husband to represent her at #gsport16 and her future ambitions as she keeps rising.

Mbali, how does it feel to have won the 2021 Public Choice award?

I was absolutely elated by the award. Never in a million years did I ever think I would ever win a gsport award. It’s an absolute privilege to be amongst such esteemed women who are breaking down barriers in the sports industry. The award is a validation of the work that I have been putting in over the years.

Your husband represented you on stage because you were on assignment. How did he enjoy the experience?

My husband is probably my biggest supporter, the one person who sees me even when at times I don’t recognise myself. When I was in Uruguay in 2018, he collected my SAB Media Award. That was his first taste on and awards stage, so I think this time around at the gsports he had more of an idea of what to expect. Though, awards and atmospheres are different, he was so happy and so proud to be there because he knows all the times I had to sacrifice not spending time with him and the kids. He was really moved by the acceptance speech watching back on TV because he didn’t realise just how much of an anchor he has been throughout my journey.

As a woman in TV, what are your thoughts on the awards being televised?

It’s great that they are, because the country can celebrate together with the women being recognised in the industry. For so long women have fought for equal respect and recognition. For so many sponsors to come on board, and even the Ministr of Sports Mr Nathi Mthethwa to be present at the awards, is testament that finally women are not just being listened to but also heard. Gsport is the biggest female sports recognition awards, and so they should be given a platform considering that they are a first of their kind.

Why do you think is important for platforms such as gsport that cover woman like yourself, who also play a part on telling other women’s stories?

The one motto I live by is ‘Be a woman with a story to tell’. Everyone has an intricately woven story line in the industry, and that very story is what keeps you authentic and relatable. Telling peoples stories makes us understand who they are, and what gives them drive. When we celebrate others, we understand that ‘it takes a village’ and that each milestone is a brick and layer being laid for the next generation. Our responsibility is to keep the doors open for those who are to follow in our footsteps.

Let’s take a few steps back on your journey. When and where did your love for sports began?

I have 3 older brothers and no sisters, so I grew up playing ports from Grade 0 all the way until Matric. My parents didn’t believe in couch potatoes, so being active and competitive was always in my DNA. When I was 8 years old, I was watching the 1998 FIFA World Cup final between France vs Brazil. Brazil lost and I cried, and that’s when I realised the emotional aspect of sports.

The sports bug officially bit me then, sitting in my yellow plastic hair, crying in my denim dungaree for a team that didn’t even belong on the African continent.

From there I watched, followed and played football. I played many other sports which I also follow till today such as Athletics, Netball, Basketball and Cricket. After I graduated from Wits University, I shadowed some people in sports and kept abreast with what’s happening. After trying to break into the industry for 6 years, going auditions too, I finally got my break at Soweto TV, where I won my first industry award and chart my way to SuperSport and VisionView Sport Radio.

I initially wanted to do Sports Media, but hey TV chose me. The rest is history!

What are your thoughts on the current state of women’s sport?

Well, we are seeing more and more women taking their place, and opportunities being given to more women. I see even more female journalists present at press conferences. There were many times when I was the only female journalist in the room, and that was not a moment to celebrate, but a moment of concern. We are not seeing an influx of women in sports at a rapid pace, however we can’t ignore that those who do already occupy these spaces, are doing a phenomenal job.

What are some of the positive lessons garnered in radio and TV?

I learned that you can’t rush growth, and that I need to be patient. I was taught that if I focused on the quality of my craft, rather than the number of bookings I received, then I would have longevity in the industry. Quality will keep you relevant, without having to prove anything. I love being a journalist and staying on the ground, I saw that I built relationships better, with other journalists, coaches, players and even clubs.

One thing I took from my days back at Soweto TV is to trust and believe in my talent, to take the road less travelled, and never be afraid of challenges.

What is your current biggest career highlight at the moment?

I have so many important moments in my journey, but if I really had to choose, for me I would say is going to Uruguay for the FIFA U17 Women’s World Cup in 2018. That was my first time going overseas, and getting experience being part of the AIPS Young Reporters Program, and working with FIFA. Another big milestone is winning the Mail n Guardian Top 200 Young Influential people in sports. That was back in 2019.

What are you hoping to still achieve in your career?

Well, my dream is to cross boarders and work internationally for the likes of Sky News, ESPN or even FIFA. But first, I would like to host CAF Awards. After all has been said and done, I need to plough back into my community where it all started. We can’t expect to keep on taking and never think of giving back to the communities that supported us along the way.

What advice can you give to a young lady who want to pursue TV and radio?

Commit to the process and don’t rush your growth. Don’t take short cuts, but focus rather on quality rather than quantity. Start from the bottom at community medias or campus media platforms. Passion will always separate those who are truly hungry for success, but remember that passion is also an inconvenience. What I mean by that, is that you are the one who has to study harder, go the extra mile, burn the midnight oil, attend press conferences using your own petrol or money, you have to put in the time behind the scenes before anyone notices you in public.

Photo 2 Caption: Mbali Sigidi feels elated about the award as she never thought she will win the gsport award, she reveals her career international goals and her thoughts on the awards being televised. Photo: Supplied