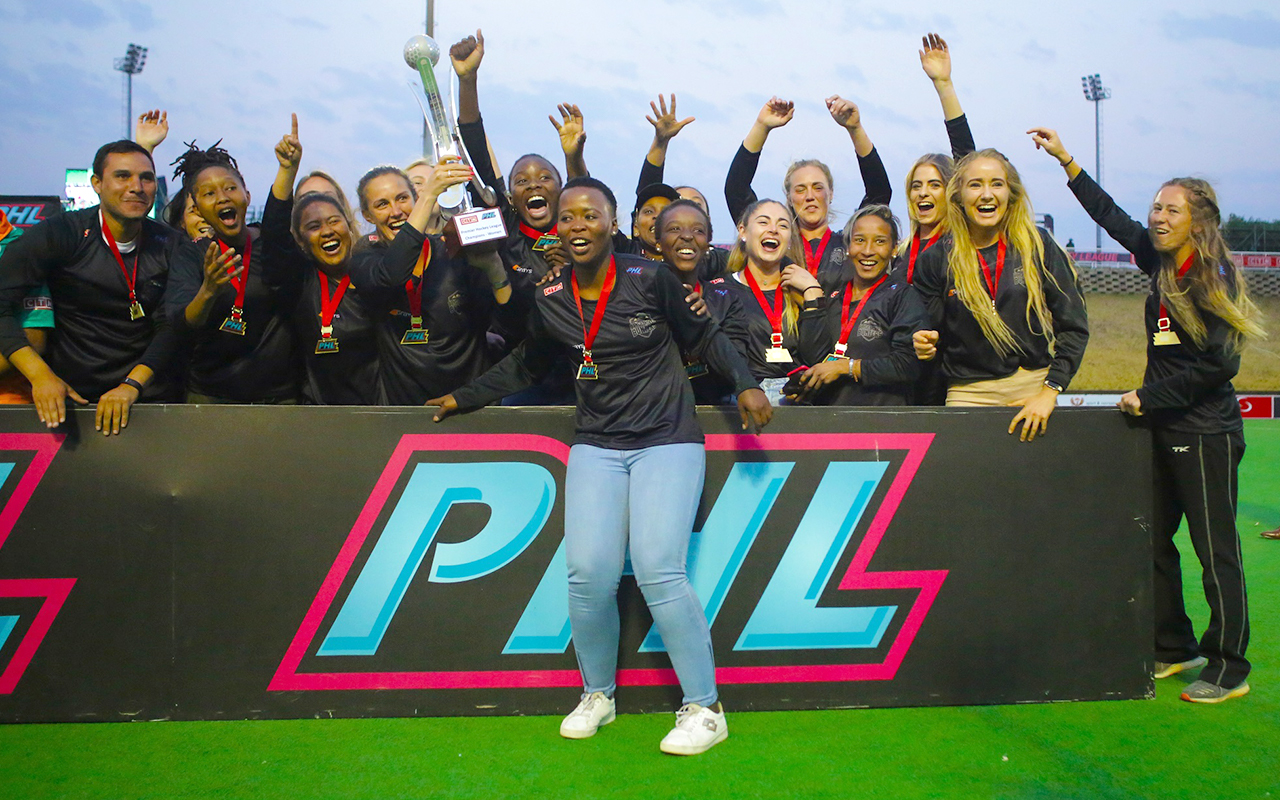 The Blyde River Bunters secured their second CTM Premier Hockey League title when they overcame the Madikwe Rangers in a tense battle for the 2018 crown at Randburg Astro in Johannesburg, on Sunday afternoon, 26 August.

Much of the early game was down to a titanic midfield tussle led by Izelle Verster for the Bunters, and Lisa-Marie Deetlefs for the Rangers.

There were some unbelievable lines run by the Bunters forward duo of Thati Segoale and Courtney du Preez, but the final ball was just not arriving for the 2016 champions. Monique Bartsch was particularly impressive for the Rangers who also couldn’t get through the opposition backline.

In a game of only four shots on target, split evenly, just 38 circle penetrations and only three penalty corners, it was always going to come down to who took their opportunity.

Unfortunately for the Rangers, the answer was Izelle Verster for the Bunters, when she turned on the top D to create space and fire a low finish past Modipane in the Rangers goal. That goal for Verster – added to her assist in the 2016 final for the Bunters when she had set up Kaydee Miller for one, turned out to be the championship winning goal.

As the Rangers tried to force their way back into the game and Lisa-Marie Deetlefs tried to gain traction, the Bunters raised their work load and blunted attack after attack, with Jessica De Bruyn-Smith and Carmen Smith being particularly impressive.

When Sylvia van Jaarsveldt missed a golden chance to beat Phumi Mbande in the Bunter goals in the last minute, it was to the sheer delight of Marcelle Keet and her Bunters team, becoming champions for the second time in three years.

“The grit and display are a culture of the Bunters. We had a great team plan from Marcel and the coaching staff to press high up and we are delighted it came off,” said an elated Bunters captain Phumelela Mbande.

On semi-final Saturday it had been a case of dejavu with the Blyde River Bunters and the Madikwe Rangers setting up a repeat of the 2016 final, through their respective shootout victories over the St. Lucia Lakers and the Orange River Rafters.

The Blyde River Bunters started their semi-final against the St. Lucia Lakers much on the back foot but managed to keep the score level until half-time. The Bunters then started the second half in better form before, the Lakers finally got the lead that their first half deserved when they scored through Megan Anderson, the 150th goal in Women’s PHL history.

The striker picked up the ball at the top of the D, turned and fired brilliantly past Phumelela Mbande, something that almost seemed impossible with the form of the South African keeper on the day.

The Bunters tried to raise the game in the second half as they looked for the equaliser, but in truth were struggling to break the superb defence of the Lakers. Eventually though they got a penalty corner opportunity, just their second of the game to the five from the Lakers, and in an identical repeat of last week’s game, Carmen Smith fired home the goal that restored parity in the 56th minute. Ayanga Baleni had a golden chance to settle it for the Lakers in the last minute of the game but she fired wide and sent the game to shootouts.

Kara Botes and Tegan Fourie scored for the Lakers, but because of Elmien Marais, Izelle Verster and Minke van Heerden scoring for the Bunters, Stephanie Baxter – the first player ever drafted in PHL history – had to score, but she was unable to beat Mbande, sending the Bunters back to the final.

“It was an exciting game and we are so happy to make it to the final!” – Player of the Match, Phumelela Mbande.

“Our coaches made the big calls and the right times and all credit to them getting us to the final,” said Player of the Match, Phumelela Mbande.

The Rangers were huge underdogs taking on the Orange River Rafters and their task looked even harder when Charne Maddocks put the undefeated defending champions in the lead in the fourth minute. There was a super goal line clearance by Lezaan Jansen van Vuuren but Maddocks was perfectly positioned to tap into an empty net. T

Things went from bad to worse for the Rangers when the Rafters skipper Sulette Damons made it 2-0 early in the second quarter. Picking up the ball on the base line Damons created her own space before smashing the ball home. It was a reminder why she is so highly feared across global hockey. It had been a perfect first half for the Rafters limiting the Rangers to just one shot at goal.

With nothing to lose the Rangers tried to fight back and Sylvia van Jaarsveldt started the Rangers comeback in the 36th minute making her the leading all-time scorer in PHL history, with a real poacher’s effort just in front of Greyvenstein in the Rafters goal. The Rangers then pulled level, taking advantage of the Rafters yellow card and scoring through a slight deflection from Shindre-Lee Simmons. It was a goal they deserved for their best half of hockey in the tournament so far.

“We know the Rafters are a great side with good momentum.” – Lisa-Marie Deetlefs

The Rangers poured forward with sensational intensity and were unlucky to not win the game in normal time denied by bad luck, poor finishing and Cheree Greyvenstein and the second semi-final went to the shootout. The Rangers winning 3-1 with Deetlefs, van Vuuren and van Jaarsveldt all netting and setting up a repeat of PHL 2016’s gold medal match.

“We had to make big changes at half-time, we got the result in the end and I couldn’t be prouder,” said Madikwe Rangers skipper Lisa-Marie Deetlefs, the Player of the Match.