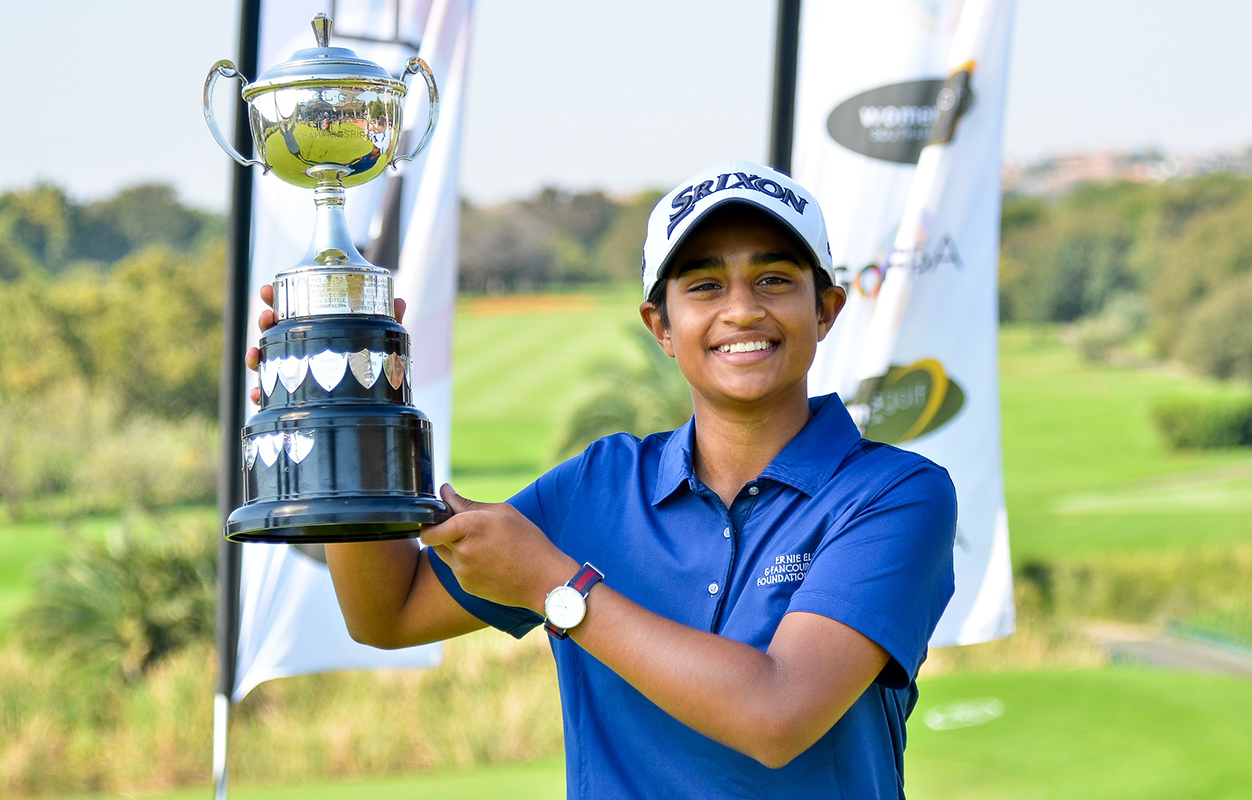 Kajal Mistry slept on the lead for two straight nights and on Friday, she finished the job to lift the South African Women’s Stroke Play Championship trophy for a second time, after first lifting the title at the Wanderers Golf Club in 2017.

And Mistry was not the only one to reach the winner’s circle in wire-to-wire style.

Western Province rising star Kayla Paulsen also led from start to finish at the Woodhill Residential Estate and Country Club to seal a five stroke victory in the B-Division.

Mistry opened her campaign with a two-under-par 70 to share the lead with fellow GolfRSA Elite Squad player Caitlyn Macnab. She fired a stunning five-under 67 in the second round to start the final day four shots clear of Gauteng team-mate Symone Henriques.

“I really happy with the result, and the way I managed my game around this tough course to win again,” said Kajal Mistry, 2017 and 2019 SA Women’s Amateur Stroke Play Champion

Mistry birdied three of her first five holes, but a bogey at par three 12th and double bogey at the par four 13th cut her advantage to three shots.

The 18-year-old Randpark golfer, who had been remarkably poised all week, shrugged off the back nine stumble and solid pars from the 14th hole allowed her to enjoy a long-awaited walk up the final hole.

A six-foot putt for par at the last for a final round 71 and a five shot triumph was celebrated with a water shower from her close friends and fellow GolfRSA Elite Squad team-mates.

“I really happy with the result and the way I managed my game around this tough course to win again,” said Mistry.

“I never felt under pressure and I could actually enjoy the win.” – Mistry

“I played a really great round on day two to give myself a chance and I stuck to my strategy in the final round. When I won two years ago, it was the first time I experienced real pressure. This time around, I never felt under pressure and I could actually enjoy the win.”

Henriques birdied the second and eagled the par five fifth, but Mistry responded with a trio of birdies.

The 2017 champion hit a knock-down pitching wedge into the second and holed the six-foot birdie putt, and rolled in a left-to-right tester from 10 foot at the fourth for birdie number two. “I was a little out of position on the left at the par five,” said the Ernie Els and Fancourt Foundation member.

“I laid up with a 7-iron and I hit it about two metres past the pin. Symone was on the green in two and drained a 20 metre putt for eagle, but I got a good line from her and holed the birdie putt.”

“I learned a lot on the Sunshine Ladies Tour about letting go of bad shots.” – Mistry

“That par three is really daunting from the elevated tee and the pin was front left and the last thing I wanted to do was go in the drink, so hit it way past the hole,” Mistry said. “I lagged it close but the par putt just burned the edge.

“At 13, I hit a terrible tee shot left off the tee. I had a tree in my way and couldn’t see the flag and hit my second shot in the left bunker. I had another tree in the way, so I punched out, chipped it to six foot, but missed the bogey putt on the low side.

“I learned a lot on the Sunshine Ladies Tour about letting go of bad shots, and even when the gap was reduced, I didn’t let my thoughts wander. I just made sure that I kept in the moment and played for pars coming home.

“I’m really stoked, but there won’t be much time for celebration, because the Match Play starts tomorrow. Now the pressure really starts, because anything can happen in this format. I would love to add my name to the winner’s list, so I’ll hit the reset button tomorrow morning.”

Macnab battled a balky putter on day two and struggled with the flat-stick for most of the final round, but something clicked as the Serengeti golfer came down the home stretch. She fired three birdies on the bounce from 16 to close out a runner-up finish with a three-under 69.

Henriques signed for a 74 to finish in third on one-under.

Two-time Bridge Fund Manager Junior Series winner Kiera Floyd reeled in a trio of birdies from the ninth on her way to a final round 71 that earned the 15-year-old Ekurhuleni junior fourth on her own on one-over.

Gauteng’s Kaiyuree Moodley closed with an even-par 72 to round out the top five on two-over.

Western Province Women’s Golf Development Squad graduate Paulsen was over the moon after edging out Kamaya Moodliar from KwaZulu-Natal with rounds of 87, 85 and 87 to win the B-Division.

“I had low expectations coming here because Woodhill is such a tough course, and I’m so happy with the result,” said Paulsen.

“The course was quite long and the greens are so tough to read, but I was really happy with the way I started this week. I wanted to test myself against the field, and I really managed myself well. Now I can leave for Texas to start at Ranger College with a big win under my belt.

The stage is set for the finals of the SA Amateur Championships, with three mouth-watering 36-hole matches to look forward to that will determine the country’s champions of the year at Royal...

Top seed Megan Streicher looks to be the player to beat as she marched on to the quarter-finals of the South African Amateur Championships at Royal Johannesburg & Kensington Golf Club on...