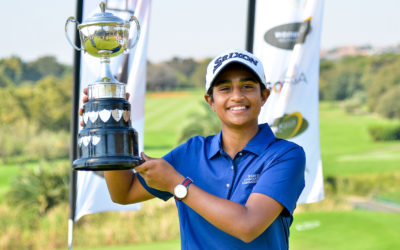 A file photo of Denmark’s Lisa Holm Sorensen during the 2007 Wales Ladies Championship of Europe on the Ladies European Tour. Sorensen finished four shots ahead of Sweden’s Maria Boden […]

Brilliant Gina Leads on Round 2

Local amateur Gina Switala carded a brilliant second-round 66 to tie for the lead at -7 under par with England’s Rebecca Hudson and Norwegian Marianne Skarpnord, after the second round of the […]

Neither of South Africa’s first-round or second-round amateur WPGA Masters leaders, Morgana Robbertze and Gina Switala, were able to push through to victory at the Parkview Golf Club in Johannesburg […]

Round two of the 2007 Sanlam SA Amateurs Championship at the magnificent George Golf Course contrasted sharply for the two tournament favourites, as day 1 leader  Kelli Shean disappointed to […]

Defending Champion Ashleigh Simon shot a reasonable first-round 1-under par 71 to stay in contention for the 2007 Sanlam SA Amateurs at the George Golf Club on Sunday, but it […]