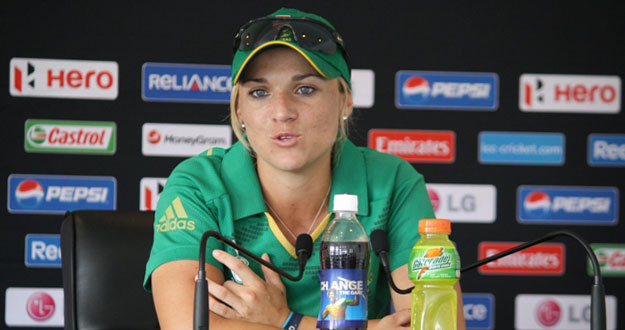 Pakistan and South Africa qualified for the event after finishing second and fourth in the ICC Women’s World Cup Qualifier 2011 staged in Dhaka, Bangladesh. Pakistan made the final of that event, losing to West Indies in the final by 130 runs while South Africa played Sri Lanka in the third/fourth play-off and lost that match by three wickets.

The final Group B round-robin fixture at Barabati Stadium will see the ever-improving South African team take on Pakistan, as both teams look to qualify for the Super Six stage of the event.

South Africa will be led by in-form batter Mignon du Preez, while the side has welcomed back into the fold former captain Cri-Zelda Brits, who temporarily took a step back from international cricket.

The Momentum Proteas are currently ranked eighth in the world rankings, while its highest-ranked players in the Reliance ICC Women’s Player Rankings for ODI batters are du Preez (16th), Tricia Chetty (17th) and Brits (18th).

In the bowling rankings, Sunette Loubser is the only South African in the top 20, however her compatriot, Dane van Niekerk is 21st. Van Niekerk had a strong performance in side’s recent ODI and T20I tour to the West Indies where she claimed 10 ODI wickets, including a hat-trick in one of the ODIs.

If previous results are any guide, then South Africa may knock Pakistan out of the group. The two sides have met nine times in ODIs, with South Africa being victorious on seven occasions, while Pakistan have won once with one no result.

However that being said, Pakistan’s only win over South Africa came recently – the last time the two teams met – at the ICC Women’s World Cup Qualifier in 2011, when Pakistan beat the Proteas by three wickets.

Pakistan will be led by Sana Mir who will be hoping the sub-continent conditions suit her team of talented bowlers including spinner Nida Dar and the as yet uncapped medium-pacer Diana Baig. The all-round skills of vice-captain Bismah Maroof will also prove important for the side if the team is to remain in the competition past the group stage.

Word artist, designer and cricket analyst for Lingwalagwala FM, Xolile Mabuza, aims to become the first black female to commentate in SiSwati. She chats to Nonto Nothana about her journey to date