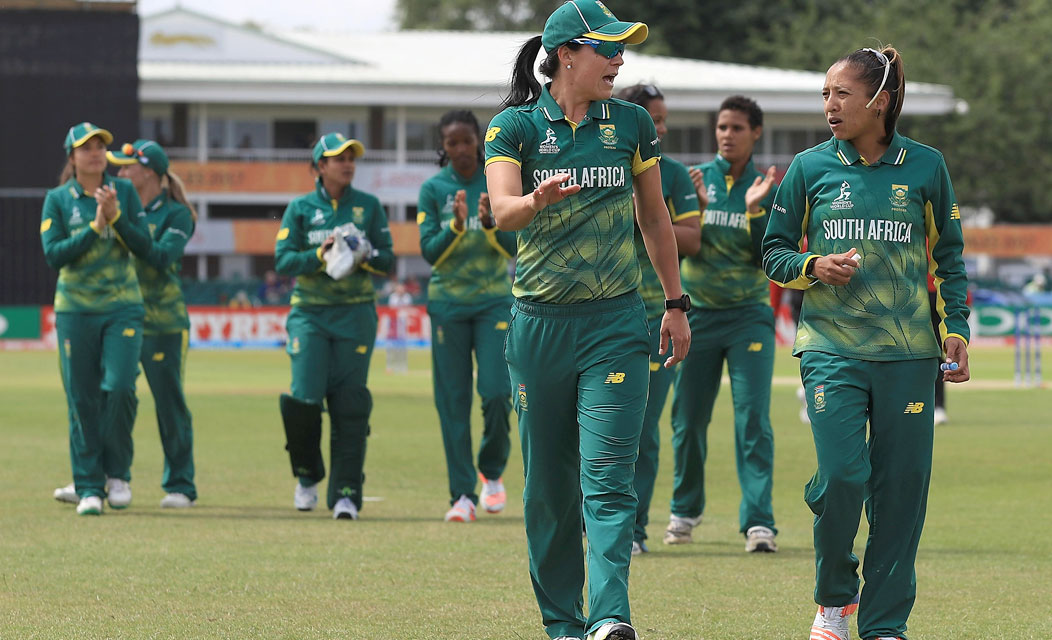 Superb bowling performances from Marizanne Kapp and Dane van Niekerk helped South Africa cruise to an impressive 10-wicket victory over the West Indies for its second win at the ICC Women’s World Cup 2017.

Kapp grabbed four for 14 to do the early damage along with new-ball partner Shabnim Ismail while leg-spinner van Niekerk later picked four wickets without conceding a run as South Africa bowled the opposition out for 48 in 25.2 overs. South Africa got to its target in only 6.2 overs.

The West Indies had been bowled out for 63 by South Africa in a warm-up match and it struggled once more as Kapp took three wickets in one over to leave the West Indies tottering at 16 for five.

Openers Lizelle Lee and Laura Wolvaardt made light work of the low target to help complete the victory.

“It was quite surreal, if I could script it I would not have written it like that,” said Van Niekerk. “We had our plans coming into the game and it worked to the tee. I’m really proud of the bowlers, especially my two opening bowlers, they were world class.”

The West Indies top order couldn’t cope with the movement Ismail was producing in the English conditions.

Hayley Matthews was the first to fall to Ismail, trapped leg before wicket for just four runs. And Ismail struck again in her next over, sending Stefanie Taylor’s off stump cartwheeling.

The West Indies side was in serious trouble as its top order fell apart. Pace bowler Kapp joined the party as she first caught and bowled debutant Reniece Boyce and then trapped Kyshona Knight leg before wicket the next ball.

She may have been denied a hat-trick, but two balls later Kapp had her next third victim as she dismantled Deandra Dottin’s stumps, an incredible three wickets in one over.

A 22-run partnership between Chedean Nation and Merissa Aguilleira was the only resistance offered, but the brief West Indies revival was ended by van Niekerk when she bowled Aguilleira round her legs as the batter attempted to sweep the spinner.

West Indies continued to try and sweep van Niekerk with little joy as Shanel Dolly shovelled one straight to Laura Wolvaardt, and after dismissing No.11 Qiana Joseph, van Niekerk became the first woman or man in World Cup history to take four wickets without conceding a run.

The opening batters didn’t look back as they cruised to the target to make it two wins from three in the tournament.

West Indies batter Hayley Matthews said: “We didn’t do too well against them in the first game, we wanted to start fresh but we went out there and just weren’t able to execute our skills.

“I think their bowling was very good, it’s a good bowling line-up, they have a lot of strong players. But from outside we just needed to execute our skills much better.

“The wicket had a little grass on it, but the openers bowled really well today.”

Photo 1 caption: The Proteas Women secured a significant win in their ICC Women’s World Cup campaign in Leicester on Sunday, when they bowled out West Indies for 48 before reaching the required target without loss, in the 7th over. Photo: ICC
Photo 2 caption: Player of the match SA’s opening game, Shabnim Ismail broke through for SA first, taking the wickets of Hayley Matthews and Stefanie Taylor to have West Indies reeling at 10/2, after 5 overs. Photo: ICC
Photo 3 caption: Marizanne Kapp earned the Player of the Match for her 4/14 which decimated the WI middle order after dismissing Reniece Boyce in the 8th over. Photo: ICC
Photo 4 caption: SA openers Lizelle Lee and Laura Wolvaardt wasted no time in achieving the asking score in the 7th over, for a 10-wicket win with handsome payback in terms the log’s net run rate column. Photo: ICC