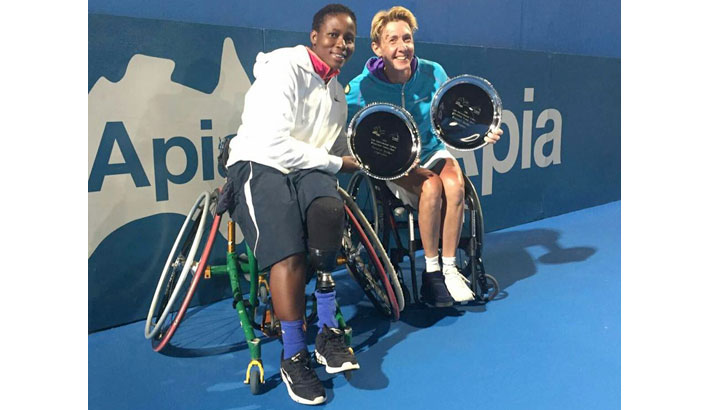 It was a case of enduring for the win under trying circumstances as third seeds Sabine Ellerbrock and South Africa’s Kgothatso Montjane won the women’s doubles title, in the Apia International Sydney Wheelchair Tennis Open on Saturday.

“To pull a title out of tough playing conditions – it wasn’t easy!” Montjane told gsport after of win, “I’m very happy with the doubles title!”

The third-seeded pairing of Ellerbrock and Montjane saw off British second seeds Lucy Shuker and Jordanne Whiley 62 26 63 in their semi-final, before taking the title in straight sets against Japanese fourth seeds Kanako Domori and Yui Kamiji to seal their first Super Series doubles title together, in 62 64.

The local sporting star told gsport what she endured to ensure success: “Having too much rain in the tournament, which led to delay of matches where I ended having to playing 3 matches (two singles match and doubles) in a row, finishing in the early morning, and having to playing two matches again (on the following day), to finish the following day in the early morning too!”

“It wasn’t easy but I’m glad we pulled it through!”

From here the talented athlete goes on to the Melbourne Open where she’ll partner Britain’s Louise Hunt in the tournament’s second-seeded pairing, starting at the quarter-final round after 1st-round byes in the doubles tournament.

World no. 8 in singles, Montjane will also take on Japan’s Yui Kamiji in the tournament’s quarter-final, after having already despatched China’s Ziying Wang and Korea’s Ju-Youn Park in the opening two rounds.

January will end with the final of the four season-opening international wheelchair tennis tournaments, is the Australian Open Grand Slam, also in Melbourne.