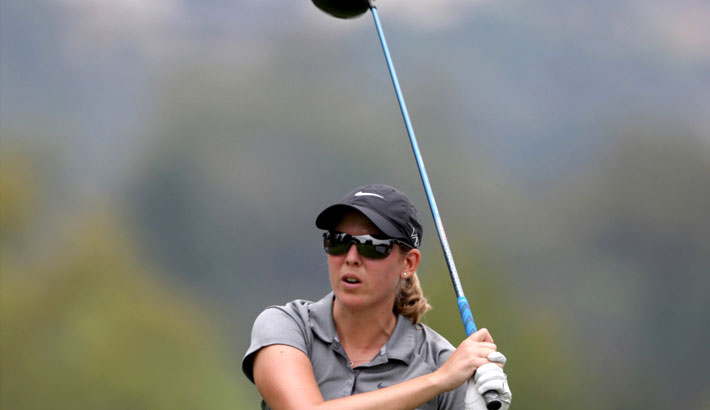 Four-time Sunshine Ladies Tour champion Ashleigh Simon made the perfect start to her 2016 Chase to the Investec Cup for Ladies campaign in the Ladies Joburg Open at the Royal Johannesburg and Kensington Golf Club on Monday.

Simon ended Round 1 with a 1-shot leaderboard advantage after firing a five-under-par 67 at the West Course to lay down a marker for a fifth Sunshine Ladies Tour title.

Simon finished ahead of Lee-Anne Pace, Kim Williams, Nobuhle Dlamini from Swaziland and LPGA Tour rookie Bertine Strauss and two shots ahead of rookie Carrie Park, who aced the par-three 16th on her way to an opening 69.

“The last year was littered with dizzy spells or a sudden loss of balance, but since I had the grommets fitted, the world is finally the right side up,” Simon said.

Twelve months ago, Simon sealed a sensational six-stroke victory in the Sunshine Ladies Tour Open at Royal Johannesburg and Kensington.

The 26-year-old didn’t waste much time to take control again at her home course, collecting up her first birdie at the par-five second, added gains at five and six, but short-sided herself at the seventh and couldn’t save par.

However, Simon negated the bogey with a 20-foot birdie putt at 13, stiffed a seven-iron at 17 and made the four-footer for birdie and made a superb up-and-down birdie at 18.

“It was really nice to get those competitive juices flowing again,” Simon said. “The leaderboard is tight, which I think is really great. It’s going to be an awesome contest over the next two days.”

Pace rode a hot putter to birdies at two, four, seven, eight and nine, but the only colour on her card on the back nine was a bogey at 12.

“It was great to get the rust off and I am hitting the ball beautifully, but the putter just went cold,” she said.

Pace got her season off to the best start possible with a four-stroke victory in the SA Women’s Open in early December and is hunting a strong performance this week to strengthen her bid for a third Chase to the Investec Cup for Ladies title.

“I’m leaving for the Pure Silk Bahamas LPGA Classic at the end of the week, so I really want to win or at least finish second this week to protect my lead,” the Pearl Valley golfer said. “That said, RJK is Ash’s backyard and she won’t give it up without a huge fight. Still, the rust is off and I am definitely going to give Ash a run for her money.”

Strauss traded two birdies for bogeys on the front nine, but was fired up after quartet of birdies on the back nine left her within striking distance of Simon in her Sunshine Ladies Tour debut

“I felt a little rusty on the greens at the start of the round and I let a few slip,” Strauss said. “I made a 20-footer for birdie at 11 that really got my momentum going.

“I got a good read off Lee-Anne’s putt at 12 to box a 30-footer for birdie and picked up another pair of birdies at 15 and 18. It’s great to be out here and competing against such accomplished players. The competition is stiff, though, so I will have my work cut out over the next two rounds.”