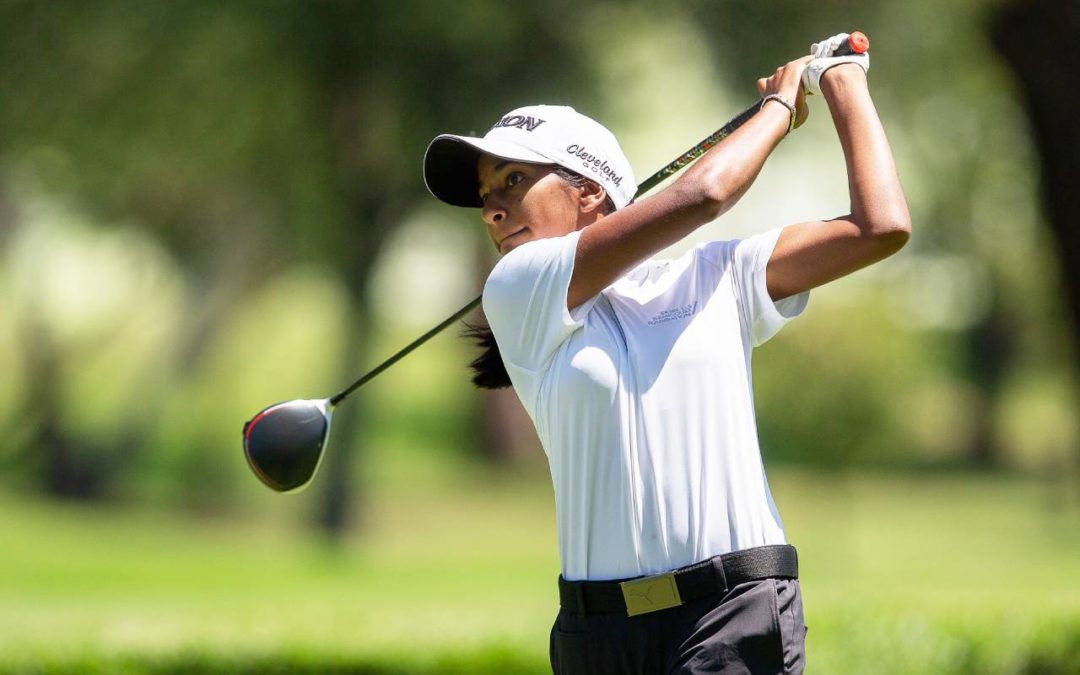 Never in a million years could Kaiyuree Moodley guess that one of her worst rounds would lay the groundwork for her biggest career achievement – winning the leading amateur honour in the 2020 Investec SA Women’s Open.

Coming off a runner-up finish in the KwaZulu-Natal Championship at Durban Country Club, the pintsized 18-year-old was relishing the opportunity of qualifying for the Sunshine Ladies Tour season-finale in the City of Cape Town last week.

Moodley and the rest of the qualifying field were greeted by a raging 55km per hour gale at Westlake Golf Club on Monday, 9 March.

Gunning for one of the five spots on offer, the former Youth Olympian was nearly reduced to tears after posting 81. “It was the worst score I’d posted in a very long time. I was incredibly distraught. I quite certain that I was going home,” said the GolfRSA Elite Squad member. “Then, as the rest of the girls came off the course, I realised that my 81 was actually not too bad.”

“It was without a doubt the worst conditions I’d ever played in. Add the stress of trying to outplay the professionals…it was very stressful and I was devastated when I walked off the course. Never in a million years did I think 81 but an hour later, I’d made it. It was a dream come true when I realised that I was going to tee it up in the Investec SA Womens’ Open.”

“It was a bit surreal knowing that I already won the Jackie Mercer Trophy when I teed off in the final round.” – Golf RSA Elite Squad Member, Kaiyuree Moodley

Moodley teed it up in the field of 132 from 26 countries with an iron-will to succeed.

She fired rounds of 74 and 75 and when the cut to 60 and ties fell at six-over, the Ernie Els and Fancourt Foundation member was the only amateur left in the field for the final round.

She teed it up on Sunday, 14 march alongside 70 professionals and sealed a top 46 finish with a final round 75.

“It was a bit surreal knowing that I already won the Jackie Mercer Trophy when I teed off in the final round, but I still tried to put the best score I could on the card,” Moodley said. “The biggest highlight of competing on the Sunshine Ladies Tour this year was the opportunity to play with the professionals and getting a first-hand look at how they manage their games.

“I was really happy with my driving accuracy during the three rounds. I only missed four or five fairways during the whole tournament. That is definitely one of the strengths of my game. One of the biggest learning curves in the Investec SA Women’s Open was playing with a yardage book only. We are allowed to use range-finders on the amateur circuit, so learning how to pace things out and using the yardage book was a bit challenging.

“I’m proud of how I handled that and everything else. It was extremely good to play with the pros and to observe their course management. I am heading to the United States later this year to take up a golf scholarship and it’s great to leave South Africa on a high note after this championship.”

“It was one of the most amazing experiences of my career to meet Annika in 2019.” – Moodley on playing at the Annika Invitational USA

The South African amateur began her season in the USA, where she represented Team Annika in the annual Major Champions Invitational in Phoenix, Arizona. The team, captained by Major champion and Golf World of winner and World Hall of Famer Annika Sorenstam, finished top five.

“I was invited by Annika and the Annika Foundation to join the team after my runner-up finish in last year’s Annika Invitational USA,” Moodley explained.

“It was one of the most amazing experiences of my career to meet Annika in 2019. I also became good friends with some the top international golfers who competed in the event. Competing in the ANNIKA Invitational opened a lot of doors for me and I am grateful for the support from my family, Womens Golf South Africa, GolfRSA and more recently, the Ernie Els and Fancourt Foundation for giving me so many opportunities to advance my career.

“Coming off the runner-up finish at Durban Country Club, I felt well prepared for the Investec SA Women’s Open and once I made it into the field I used every opportunity to learn and improve,” Moodley said.

“My heroes in the game are Ernie Els and Nicole Garcia. It was a dream come true to spend time with Nicole on the Sunshine Ladies Tour this season. The biggest lesson Nicole she taught me was to not let small things upset me or my game. Golf is a hard and long journey. She said that to become a champion, you have to have to turn a deaf ear to those who tell you that you can’t do it, do it anyway and prove everyone wrong.

“I am really proud of myself for not letting the 81 in the qualifier get to me. I followed Nicole’s advice and went out there and played to the best of my ability. It was a truly special moment when I stood next to the champion c to receive the Jackie Mercer Trophy. It’s a memory I will cherish forever. I was four years old when my mom bought me a plastic set of clubs at Pick n Pay. Who would have thought that a little set of plastic clubs would have started me on this amazing journey?”