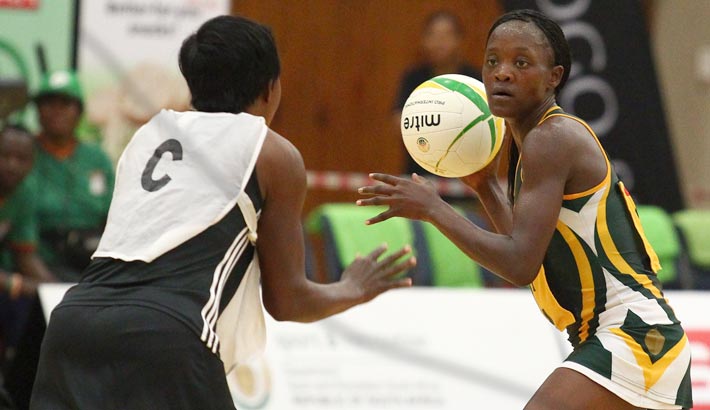 The South Africa Invitational team exceeded all expectations to win their second successive match in the Diamond Challenge international netball series, beating 20th ranked Zambia 69–47 in Port Elizabeth on Tuesday to set up a final against Zimbabwe on Wednesday.

As the Diamond Challenge is not an official ranking event, Netball South Africa released a number of seasoned SPAR Proteas and called up some of the most talented U/21 national team players to make up the Invitational team. The team’s relative inexperience at international level though was inconspicuous as they powered their way past the Zambia team just as they did on the previous night against Zimbabwe.

It’s a match that was essentially clinched in the third quarter. Whatever coach Elize Kotze had told her team at half-time worked and South Africa stepped up a gear moving the ball from their defensive third with short, sharp and flowing passes to race to a 20 point lead 15 minutes after the break. Zambia had no answer but managed a few goals towards the end of the quarter to trail by 15 as it ended 51—36.

That rhythm set the trend for the final quarter as South Africa penetrated the Zambian defence with the speed of movement and positional play which revolved around South Africa Invitational team captain Centre Bongiwe Msomi, who controlled the mid-court superbly.

The hosts outscored their African counterparts 18 points to 11 in that quarter for the win, and Msomi was crowned Vital Player of the Match. It was another clinical performance which allowed Kotze the leeway to experiment with a number of combinations in both defence and attack.

Up until the second half Zambia were right in the contest. The match started off in pensive mode as the two teams sized each other up and South Africa battled to get to grips with Zambia’s passing game, which included regular ground and low passes.

The Zambians were acutely aware of the speed of the South African’s offence, adjusting accordingly and upping their tempo in attack to add the kind of pressure that Zimbabwe could not. They managed to stay within touching distance with Goal Shooter Lucy Jere burning up the court with her accuracy to finish the quarter 18—13 behind the favourites.

Zambia kept on coming in the second quarter, and were never far behind, showing moments of brilliance with quick exchanges and precise shooting that would make teams ranked in the top three proud.

They battled superbly to pull within four of SA with a minute to go to half-time, but lacked composure to allow SA Invitational team three quick goals to go into the half-time break trailing 33—25 before coming apart in the second half of the game.

Kotze said the young team had showed great maturity and a number of them had put their hands up for selection to the SPAR Proteas team. “We are confident going into tomorrow’s (Wednesday) final but not overconfident,” said Kotze.

“Teams like Zimbabwe and Zambia play a very different kind of netball, and we know they will make it tough for us. We do believe though that if we play like we have been we can win it,” said Kotze.