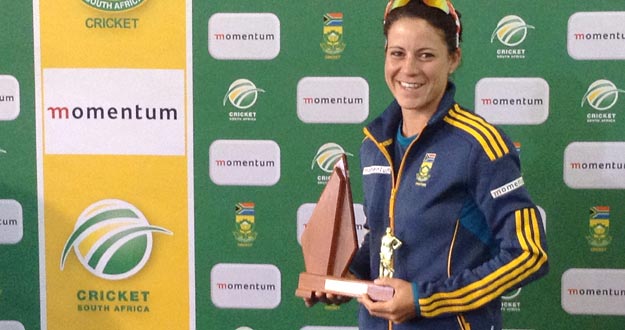 Heavy rain, coupled by thunder, lightning and hail stones brought an early end to the Momentum Proteas women’s third and last One-Day International against Sri Lanka in Potchefstroom on Monday. The match’s abandonment means that South Africa will have to be satisfied with a two-nil series victory.

The hosts had won the toss and opted to field first, bowling Sri Lanka out for 164 runs, the last wicket falling off the final delivery of the innings. Chamari Atapattu scored her first half-century of the tour, while Chamari Senevirathna chipped in with 32 off 71 balls.

South Africa’s bowlers kept the pressure up from the start when Marizanne Kapp removed Yasoda Mendis for a duck at the end of the second over. Runs were difficult to come by and the middle order failed to recover sufficiently enough to post a competitive total.

Sripali Weerakkody (11), captain, Shashikala Siriwardene (5), Dilani Mandora (17) and Maduri Samuddika (21) all lost their wickets cheaply, with no one from the tail scoring more than six.

Kapp was the leading wicket taker, claiming three for 38 in her 10-over spell. Shabnim Ismail took 2/20 in her 10 and the rest of the bowlers; Dané van Niekerk, Sunette Loubser, Yolandi Potgieter and Marcia Letsoalo took a wicket each.

The hosts only managed one over before lightning began, followed by two hours of hail storms and rain that forced umpires to put an end to proceedings.

Marizanne Kapp was named player of the series.

The teams now gear up for the three-match T20 series which starts on Thursday, 31 October. All matches will be played at Senwes Park Stadium in Potchefstroom.