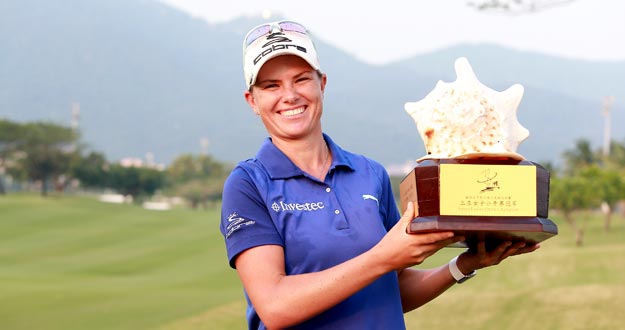 Lee-Anne Pace put the seal on a fantastic week in South African professional women’s golf with victory at Sanya Ladies Open in China on Sunday.

Just seven days ago, Pace was nominated for the 2013 Sportswoman of the Year award. On the same day, the WPGA launched the Sunshine Ladies Tour, and then South Africa’s first lady of professional golf made this week even more spectacular, when she came from behind to win her third title this season with a play-off victory at Yalong Bay Golf Club.

The 32-year-old Mossel Bay pro lagged one stroke behind overnight leader Ye Na Chung of Korea going into the final round, but in pure Pace style, rallied with a final round two-under-par 70 to tie rookie Yu Yang Zhang at 13-under-par 203 at the end of regulation play.

Pace showed her grit and determination with a perfectly timed 20-foot putt for birdie to beat the Zhang at the first play-off hole. “I love it here, and it’s a really nice feeling to come back and win here again,” said Pace.

In a sense, it was poetic justice for Pace. Just a year ago, the was preparing to tee off in the event she won in 2010, when she slipped and fell in her hotel room, injuring her elbow on broken pieces of mirror.

Three months off due to surgery and physiotherapy kept Pace from the circuit, but she celebrated her return to competitive golf with victory at the Turkish Airlines Ladies Open. In July, she added the silverware from the Spanish Open to her trophy cabinet and took the number one spot on the European Ladies Tour money list.

Pace kept herself at the top of the ISPS Handa Order of Merit with five top-10 finishes and a runner-up spot at the Ricoh British Women’s Open.

In September, Pace was leapfrogged in the rankings, replaced at number one by Evian Masters winner, world number three Suzanne Pettersen from Norway, with American Lexi Thompson taking second.

Just three events remain on the Ladies European Tour calendar and, given the prize money available, Pace has no chance of catching Pettersen to reclaim the number one spot she won in 2010, even if she won all three events,.

The €45,000 winner’s cheque in China, however, has vaulted Pace back to second and underlined once again that an in-form Pace is a force to be reckoned with.

The Tour now moves north for the China Suzhou Taihu Ladies Open, which Pace also won in a play-off in 2010.