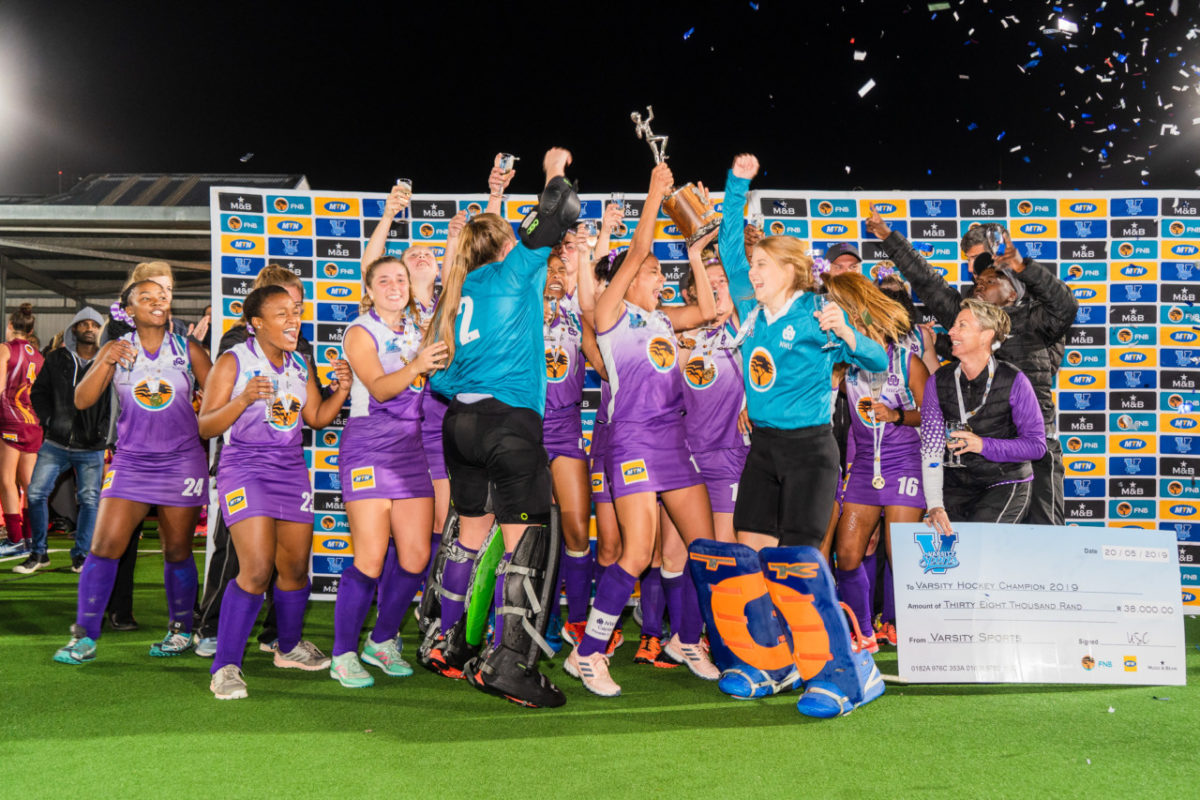 The North-West University are the 2019 Varsity Hockey champions. NWU overcame a determined Maties side to win the final 2-1 in a penalty shootout at the Maties Astro turf in Stellenbosch. The match failed to produce any goals in normal time and was eventually decided on penalties.

NWU had an early opportunity to take the lead but their captain, Charné Maddocks, failed to make contact from close range. Shortly after, Courtney du Preez’s powerful tomahawk shot couldn’t get the better of Kristen Block in the Maties goal.

Finishes not Matching the Runs

The second chukka proved to be just as fast-paced as the first although neither side could create clear-cut chances. Du Preez had an impressive run down the left flank but couldn’t find the finish to match the run.

NWU’s Candice Silent then nearly silenced the big home crowd but she had her thumping shot from an acute angle saved by Block before Maddocks couldn’t react quick enough to get a touch after a cross from the right across the face of the goal from Clarise Smit in the 29th minute. The score was locked at 0-0 at halftime.

Ammaarah Hendricks then tested Mischka Ellis, the NWU keeper in the 35th after an impressive dribble on the left side though her shot didn’t have much venom in it. Maties then had two penalty corners in quick succession with Stephanie Botha’s vigorous shot saved by Ellis as the rain started to fall in Stellenbosch.

No Clear Winner as the Final Chukka Beckons

The action was fast and frenetic though Maties would probably be the happier of the two sides as the score was still all square at 0-0 after the third quarter.

NWU’s Christa Ramasimang was then sent to the bench after receiving a green card following an infringement. The atmosphere was palpable as both sides pushed to get the opening (and perhaps the decisive) goal.

Hendricks was in the action again in the 51st minute when Rebecca Kaps’ delightful cross from the right was begging to be sent home but Hendricks couldn’t make proper contact. Moments later roles were reversed when the busy Hendricks turned provider and this time Kaps couldn’t test the keeper.

Maties won a penalty corner in the 54th minute just after they called the powerplay and Lara Stevens’s thump was saved by Ellis who stuck out a big left trapper to deny Stevens. Maties launched attack after attack but was dealt a crucial blow when Hendricks was sent to the bench with a green card.

NWU then went for the jugular and called their powerplay with less than 4 minutes to go and Hendricks off the astro. They were then awarded a penalty corner as the big crowd were now well and truly out of their seats. NWU failed to test Block in goal though with the clock ticking away.

With 30 seconds remaining on the clock the visitors had another penalty corner awarded to them and a chance at glory but again failed to test the keeper. That was the final opportunity of the match which meant that the winner would be decided via penalties.

NWU’s Kirsty Adams and Clarise Smit managed to score for the visitors whilst captain, Paige Phillips, was the only one to convert her penalty effort.

A delighted Maddocks said after the match that their hard work had paid off. “We put in the hard yards we have been hard at work since the 14th of January already so I think the hard yards have paid off. I am super proud that we actually made it through to the final and yes, may the best team have won,” she said at the post-match presentation.

Photo Caption: The North-West University are the 2019 Varsity Hockey champions. NWU overcame a determined Maties side to win the final at the Maties Astro turf in Stellenbosch. The finalists drew the match 0-0 in normal time, and the final was eventually decided by a penalty shoot-out, 2-1 in favour of NWU. Photo: Supplied