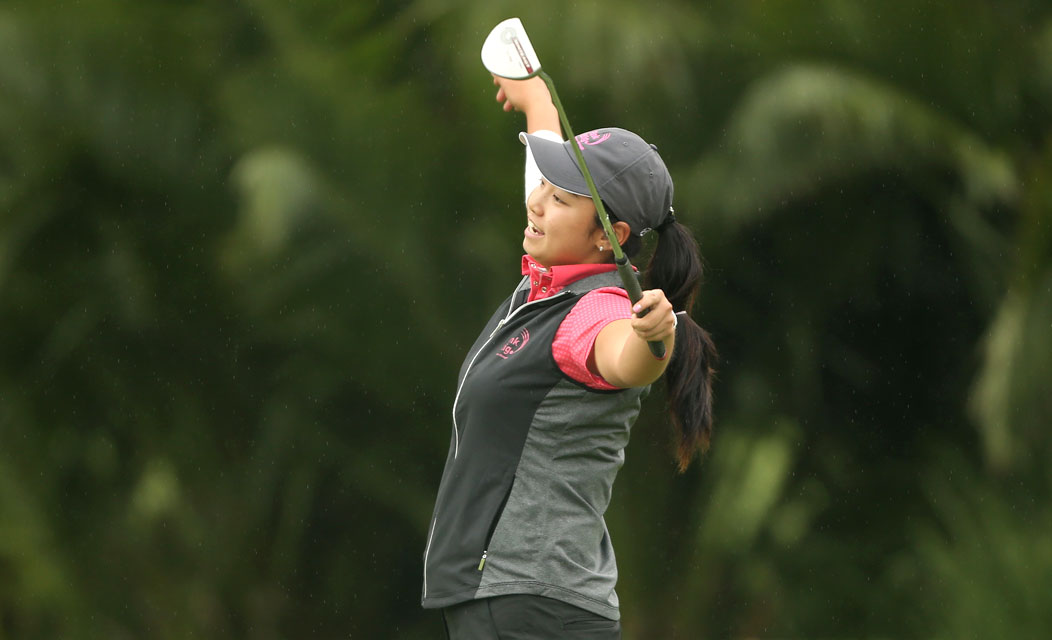 Carrie Park had to beat her nerves and play Swaziland’s Nobuhle Dlamini four extra times down Glendower’s par four 18th hole before she prevailed to claim the Sunshine Ladies Tour’s Classic Canon, under inclement conditions in Edenvale on Thursday, 23 February, 2017.

Park from South Korea and Dlamini both spectacularly birdied the 18th in regulation play to finish at five-under-par 211 in joint first place in Thursday’s final round of the Sunshine Ladies Tour Classic sponsored by Canon.

The two went up and down Glendower’s 18th in a sudden-death play-off for the 2017 SLT title in a rain-soaked dance with only one winner on the cards.

But while Dlamini was targeting a maiden win in the pro ranks, 19-year-old Park was bidding for a second Sunshine Ladies Tour victory after her breakthrough success in the SA Women’s Masters in January.

With pressure mounting, the pair traded pars for the first three trips down 18 before 19-year-old Park boxed a three-footer for birdie to seal victory at the fourth extra hole.

The petite Centurion golfer smashed a drive down the middle of the fairway and hit an eight-iron pin high to about three feet. Dlamini was even longer off the tee, but she left her approach 20-foot short of the hole and could only manage a par.

“It was tough out there with the rain because the course playing long,” said Park, who picked up shots at holes 13, 15 and 18 for a two-under-par 70. “I made some good par putts and some good birdie putts, especially on the back nine to get it to five under.”

Park collected the winner’s cheque worth R28 000 and Dlamini banked R23 000 for second, but the 320 points that came with first place gave Park a boost to third in the Chase to the Investec Cup for Ladies.

“It’s not very easy when someone like ‘Nobby’ is bombing it forty yards past you, but Nobby and I go way back,” said Park with a chuckle, referring to Dlamini who can boom it 290 to 300 metres off the tee. “We both played for Gauteng North and we used to be foursome partners. It was a good scrap between two good friends in the play-off.

“This win comes at the right time, because I’m leaving to compete in Korea next week and I’ll miss the next two tournaments. But I’m third in the points, so I won’t fall out of the top 10 for the Chase to the Investec Cup for Ladies Final while I am away. I’ll keep my spot for Millvale.”

Big-hitting Dlamini – with Killarney’s head professional Warrick Druian guiding her on the bag – produced the day’s best 67, which included an eagle-three at the par five 13th, where she hit the green with a booming drive and a five-iron, before rolling in a 35-foot putt.

Chase to the Investec Cup for Ladies leader Kiran Matharu had a 20-footer for birdie at the last which would have moved the English player to six under and given her the title had it dropped. The first attempt rolled six feet past and she missed the return for a 71 to tie for third on 212 with last week’s Dimension Data Challenge winner Nicole Garcia.

France’s Valentine Derrey took fifth on 213 in her Sunshine Ladies Tour debut, while overnight leader Ashleigh Buhai (nee Simon) closed with a disappointing 74 to finish in sixth place on 214. Centurion’s Kim Williams also closed with a 74 to finish a further shot adrift.

Symone Henriques started with an unhappy 82, but the 15-year-old from Glenvista fired a superb 67 followed by a 75 to win the leading amateur honours on 224.

“Besides being a tour for the top professionals, but thanks to the additional financial support we receive from Investec Property, the Sunshine Ladies Tour is also a development opportunity for the amateurs,” said Women’s PGA of SA executive director Barbara Pestana.

“It is wonderful to see them make the most of the opportunity to compete and to learn at this level and we are extremely pleased to see them coming through so well.”

The first round of the Sunshine Ladies Tour Classic sponsored by Canon was a complete wash-out and Pestana said the tour owed Glendower a debt of gratitude for helping them finish the 54-hole event on schedule.

“Glendower was a wonderful venue as usual and it’s great that were able to get over the finishing line in spite of the deluge of rain on Tuesday when no play was possible,” Pestana said. “Thanks to their efforts, the players will have a couple of days to rest up before the Sun International Ladies Challenge at Sun City next week!”

Photo 2 caption: Swaziland’s Nobuhle Dlamini Photo produced the day’s best 67 to sign for a clubhouse target at 5-under 211, only for Park to match her advantage for four extra rounds of sudden-death play-off at Glendower’s par-4 18th. Photo: Sunshine Ladies Tour

Photo 3 caption: Chase to the Investec Cup for Ladies leader, England’s Kiran Matharu had a 20-footer for birdie at the last which would have moved her to six under and given her the title had it dropped, but she missed and played the return past the pin to tie for third with Nicole Garcia. Photo: Sunshine Ladies Tour

Photo 4 caption: Having started the day with a slim 1-shot lead and a pack of chasers,  overnight leader Ashleigh Buhai (nee Simon) closed with a disappointing 74 to finish in sixth place, on 214. Photo: Sunshine Ladies Tour