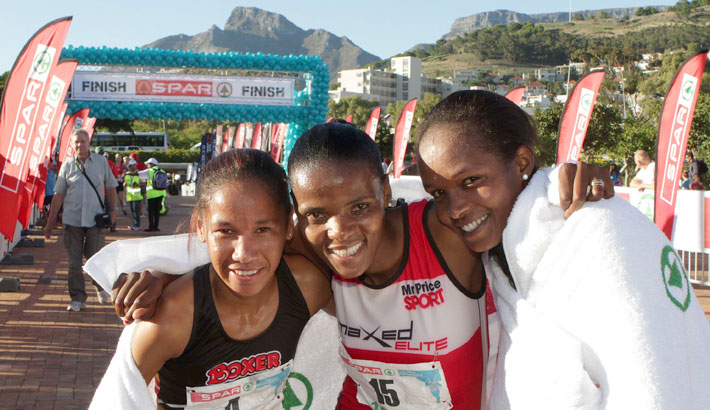 Mapaseka Makhanya, last year’s Grand Prix winner, came fifth and the other Ethiopian runner, Tadesse Shankule, was sixth. Rene Kalmer, who has won more Challenge titles than any other runner, was edged into eighth place by her sister Christine, who came seventh.

The top runners ran in a bunch for the first four kilometres of the race before Phalula started pulling away. “My legs were feeling light and I wanted to move,” said Phalula. “I knew I was going to win,” she smiled. “I came here to do my own thing, and I wasn’t worrying about anyone else.”

Phalula said she had recently changed coaches, and was now training with Michael Seme. “The change has worked for me. I have been getting a lot more mileage on the road, and I am now super-motivated. I will try to run all five races and I am planning on podium finishes in all of them.”

Gemeda, who flew into Cape Town from Addis Ababa on Saturday, said she was happy with her run, and she planned to take part in all five Challenge races.

Conrad said she had tried to stay with the leading runners from the start, but fell behind. However, she made her move at about six kilometres and settled happily into third place. “It was my best result in Cape Town,” she said. “I think it helps to train at altitude and then race at sea level.”

Rene Kalmer, who ran in the world half marathon championships in Copenhagen last weekend, said she was a bit disappointed with her run. “I think I still had the half marathon in my legs, and I found the going tough this morning. But I’ll be back,” she laughed.

More than 22 000 runners took part in the10km Challenge and the five km Fun Run on a hot sunny day, with very little wind.