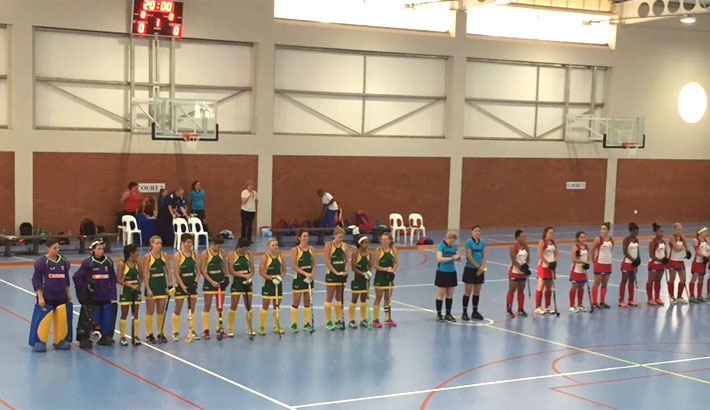 The SPAR SA women’s indoor hockey team attacked the visiting Namibian team from the outset in an effort that saw them sweep the opening encounter 5-0, in the first Test of five at St Anne’s DSG in Durban, setting off a busy summer holiday season on Thursday evening, 20 December, 2015.

The night’s action started down the right channel, which rewarded the girls in green and gold with a penalty corner, Kara Stella making no mistake, the ball flying into the net off the keeper Petro Stoffberg’s glove.

Now 1-0 up after two minutes, SA were switching across the back, waiting for the opening, and it paid off when Stella got another PC opportunity. On the third-re-award, this after Namibia had defended courageously, the keeper Stoffberg saved well from SA skipper Celia Evans on the slip variation.

SA were still 1-0 up into the last five minutes before half-time when Shelly Higgo got in a shot and then great combination play that included debutant Amore de Wet from the back, brought two more PCs, Stella netting the latter for 2-0 after 17 minutes.

Higgo was involved in earning another PC on the whistle but Namibia were up to the challenge, goalkeeper Stoffberg and the entire line-up showing outstanding tenacity in the face of the SA offense.

SA turned around 2-0 up and two minutes in it was Amy Greaves who rounded off a great goal (3-0). The SA combination play was starting to click big time and two more PCs followed, Namibia’s first wave Dunell van Taak did very well to block a shot.

The second of the PCs saw Higgo show top-class skills to slip the ball under her shoulder past Stoffberg for 4-0 with 13 left. Namibia had a moment of real threat in the SA defensive circle but it was not to be.

In the 29th minute new cap Steph Baxter showed why she is in the team and the PC won was capitalised on when Stella sent the yellow nut soaring into the net (5-0).

With two minutes of the first Test left it was Namibia’s Van Taak who did well to get in a shot. And it looked like she was to be rewarded seconds later with another fine effort to put the visitors on the board, but the “goal” was correctly disallowed.

SA earned PCs on the final hooter but the score remained 5-0 at the end of Test one and SA could look forward with confidence to Friday’s 10am and 7pm Tests at the same venue.