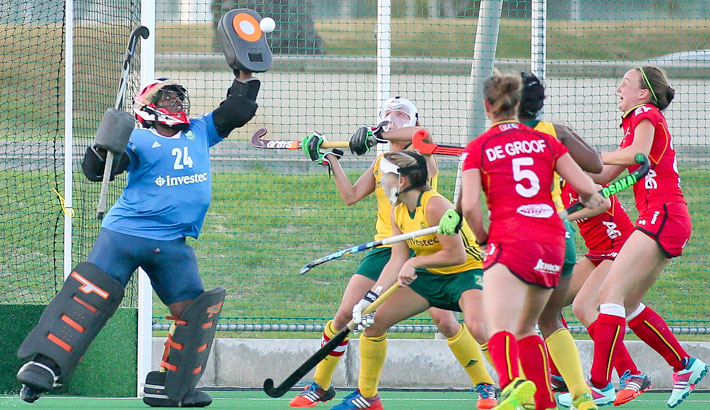 In what was a great exhibition of attacking play the Investec South Africa women’s hockey team beat Belgium 3-2 after leading 2-1 at half-time in the third Test at Hartleyvale in Cape Town Wednesday night.

Belgium, who led at half-time in both of the previous Tests, scored first through a well-worked penalty corner variation finished off by Manon Simons in the 22nd minute. Three minutes later (25th) SA were on level terms when Dirkie Chamberlain’s perfectly placed backhand blast crashed into the backboard (1-1).

SA were on song and striker Sulette Damons raced down the right channel, the former SA junior sprinter leaving her marker for dead, before Chamberlain effected the perfect one-two and Damons tapped the ball home for 2-1 in the 28th minute.

SA went 3-1 up in the 45th, just seconds before the third chukka ended, when captain for the day Jade Mayne shook off her markers – and Candice Manuel finished with aplomb (3-1).

SA defender Lisa Deetlefs hit the post during a spell of three consecutive PCs and four minutes from time (56th) Jill Boon pulled Belgium back to 3-2 after netting a hotly disputed goal.

It was a superb Test match between two willing sides intent on attack.

A mark of this Test was SA’s cohesion through the defence, midfield and striker lines with the forwards gelling seamlessly – and the result was goalscoring opportunities aplenty. Had it not been for the standout performance of keeper Aisling D’Hooghe the girls in green and gold might well have scored quite a few more.

The Belgians also created a healthy number of goalshots but keeper Sanani Mangisa, in her 100th Test, was on hand to save some very good opportunities conjured up by the Europeans.

What was electrifying was the manner in which the SA frontrunner exploited the right channel, the Belgians having no answer to the pace of South Africa’s forwards – Lilian du Plessis, Bernie Coston, Candice Manuel, and Sulette Damons in particular – while the speed of Shelley Russell in the pocket behind the strikers was yet another headache for Belgium to contend with.

The strength on the ball of captain for this match Jade Mayne and Dirkie Chamberlain provides the perfect foil to the speed merchants, while apart from the attacking and tackle-back skills of midfielder Russell, others in the engine room – Illse Davids, Nicolene Terblanche, Quanita Bobbs and Line Malan – did the hard graft to make opportunities possible upfront.

It was a pity that substitute keeper Phume Mbande didn’t get the chance to make her appearance as this win was a magnificent team effort against a very well-organised unit.