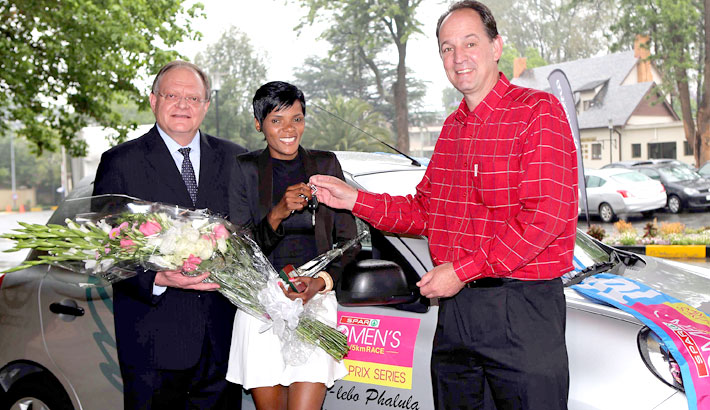 South Africa’s top woman roadrunners have a lot to look forward to this year, with massive increases in the prize money for the SPAR Women’s 10km Challenge Grand Prix series.

The Grand Prix series was introduced in 2007, and has become South Africa’s biggest and most prestigious women’s road-running series. The top runners in the five Challenge races held around the country earn Grand Prix points from each race. The 2015 winner will pocket a cheque for a whopping R150 000.

The second prize has been increased by R20 000 to R50 000, and the third prize is now worth R30 000. There are cash prizes for the top 15 runners on the points table, making it worthwhile for runners to compete in all five races.

The top runners in the different age categories will also receive increased prize money, with the first on the ladder in her category receiving R4000. The second prize is worth R3000 and the third prize is R1500.

Five runners have claimed the Grand Prix title over its eight-year history. Rene Kalmer, the first winner, is also the most successful, with three Grand Prix titles to her name. This is hardly surprising – Kalmer, who first competed in 1998, has won more SPAR Challenge races than any other runner.

Irvette van Zyl has won the Grand Prix twice, and Poppy Mlambo, Mapaseka Makhanya and last year’s winner, Diana-Lebo Phalula, have each won it once.

The financial incentive has done wonders for the Spar Challenge series, with more runners eager to earn points by competing in as many races as possible. But the races are also very popular with the elite runners because of their very nature.

“The thing about the Challenge races is that the women are the heroes,” said Sonja Laxton, who has run 81.

“In mixed races, the top woman is often surrounded by men as she crosses the finish line, whereas in the SPAR races, she is the first to break the tape, and that is a really great feeling,” she said.

“They enter the race, and then feel they have to do some training, and the next thing they know, they’ve been bitten by the bug,” she laughed.

“Women who might have been a bit wary of taking part in a mixed race feel more comfortable about competing in a women’s race.”

SPAR Group Marketing Executive, Mike Prentice said the Grand Prix series was one of the grocery giant’s most successful sponsorships.

“The Challenge races fit perfectly with our philosophy of getting involved in the community, and the Grand Prix is the cherry on the top. We are excited about increasing the prize money as we believe this will help the races to continue to attract South Africa’s top runners,” he said.

The first race in the 2015 Grand Prix series will be run in Cape Town on 29 March.  The Port Elizabeth race takes place on 9 May, and the Durban event is on 7 June. The Pretoria race – the only afternoon race – takes place on Saturday 29 August, and the final race on the calendar is in Johannesburg on 11 October.