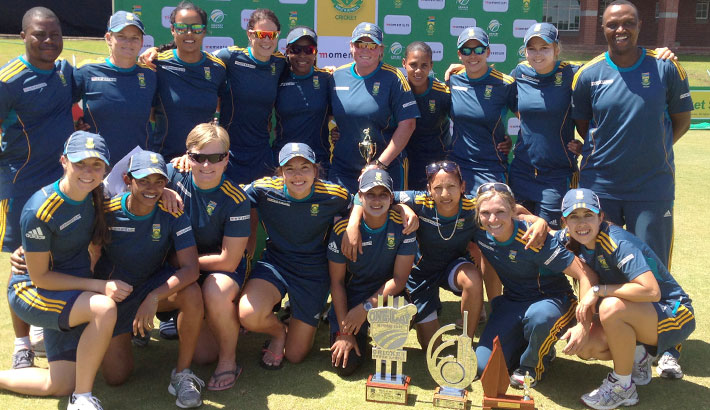 Proteas off for Pakistan and Ireland Triangular

Cricket South Africa (CSA) on Tuesday announced the Momentum Proteas Women’s squad that will take part in the inaugural Qatar International Women’s Cricket Championship from 9 to 25 January 2014 (Scroll down to view team selection and ODI and T20 Tour fixtures).

The Championship is a triangular series between hosts Pakistan, South Africa and Ireland. The Pakistan Cricket Board (PCB) hopes to make this an annual event.

The tour is of great importance as both Ireland and Pakistan are in Group A with South Africa, along with defending World T20 champions Australia and New Zealand.

“This is a very welcome opportunity for the team, especially so close to the World T20,” said Proteas’ coach, Hilton Moreeng. “This will be the perfect opportunity for us to see where we stand against other international sides since our last competitive game (against Sri Lanka) last November.

“Touring the sub-continent is also the ideal opportunity for me to be able to see how players adapt to the conditions and to teams that they are not exposed to often like Ireland.”

This will be the Proteas’ final taste of competitive international cricket before they take part in the ICC Women’s World Twenty20 in Bangladesh in March.  The tour comes as a welcome final step in the team’s preparation as they will play Pakistan in their first match at the World T20.

CSA also thanked the Willowton Group for contributing and assisting towards the travel costs.

CSA Chief Executive, Mr Haroon Lorgat said: “The Willowton Group have been magnificent partners to Cricket South Africa and are supporting the game at all levels through their well-known Sunfoil brand. Once again they have responded to our request for support so that our national women’s team can participate in a triangular series in Doha involving Pakistan and Ireland.”

Photo caption: Most recently in action in home series wins against Sri Lanka, the Momentum Proteas jet off to take on hosts Pakistan and Ireland in the inaugural Qatar International Cricket T20 and ODI Championships, from 10 to 24 January in Doha, Qatar. File photo: Supplied