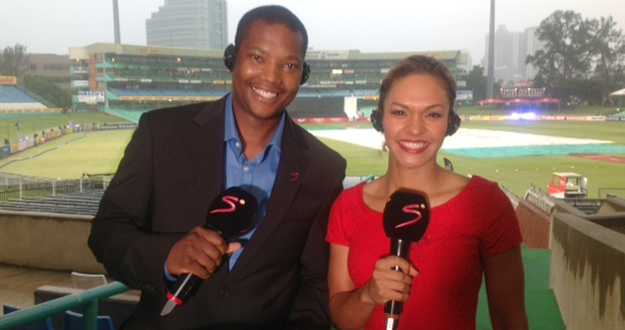 Versatile broadcaster and fitness fanatic Stacey Holland is the new face of cricket in South Africa. The bubbly presenter landed a fantastic opportunity to be part of the innovative Ram Slam T20 challenge TV presentation team on SuperSport, and she has won over many supporters.

Speaking to gsport about her role, the former etv Sunrise anchor said: “I went for an audition at SuperSport, originally for another studio-based show. The show was postponed and some of the producers thought that my personality would be suited to the format of the Ram Slam T20 Challenge.”

Holland says she grew up watching a variety of sport with her dad, cricket being one of them.

“When you begin to understand the dynamics of a sport and what is required from a sportsman, woman, the team and management as a whole, you become more and more excited about the sport itself.

Holland is no stranger to cricket. In her first year at university, studying a BCom Sport Management degree, she grabbed the opportunity to intern with the United Cricket Board of South Africa (now Cricket South Africa).

“It was a very exciting time for me and I had the unique opportunity of witnessing the sport from a behind-the-scenes perspective. I met and worked with amazing people involved in the development, promotion and administration of the sport, people whom I admire and respect,” she says.

Holland believes that cricket is one of the most transformed sporting codes in South Africa, saying: “Much has been done to level the playing fields and allow previously disadvantaged individuals to flourish. Women have also claimed their place in multi-faceted world of cricket, from administration and development to broadcasting and marketing this, more so than in other sports.”

As far as being a woman cricket broadcaster is concerned, Holland doesn’t believe it is a big deal anymore. “It’s no surprise to hear a female cricket commentator, and what’s more refreshing is that one no longer thinks, “Oh, she’s female …,” she is just another commentator.

“Kass Naidoo and other trailblazers have done much to change the perception of women in cricket and women in sport,” says Holland, “And as such women in general are starting to feel more comfortable in sharing their passion for a sport, irrespective of whether they have played it or not.”

But she admits there is a world of difference between her former role as breakfast TV anchor and her role as a sports broadcaster.

“At Sunrise I was very much a generalist, I would anchor a variety of topics of interest ranging from current affairs and business to entertainment and health. Sport was just a slot on a jam-packed lifestyle breakfast show.

“I came from a TV environment where knowing and sharing the basic points of a number of stories was all that was required and now I’m in an environment where I am broadcasting to fans specifically interested in one topic!”

Holland says she has loved the experience of being part of the Ram Slam T20 Challenge, which concludes at Bidvest Wanderers Stadium today, with the Lions playing the Titans. “I’m loving it! It’s been scary and daunting yet exciting.

“Change is always scary and the funny thing is that I have a strange penchant for regular intervals of change in my life. When I started I thought to myself: “Stacey, what the heck are you doing? Go back, it’s comfortable there! Are you sure about this?”. (laughs) But at the same time something in me was yearning for the challenge, for the growth.

“Comfortable does not mean safe. Sometimes the safest place is the most vulnerable place. They say that the moment the butterflies stop flying you should consider doing something else, well, given the speed and excitement of the butterflies in my stomach even as I type this, en route to my next match in a few hours, I reckon I’m in the right place!”