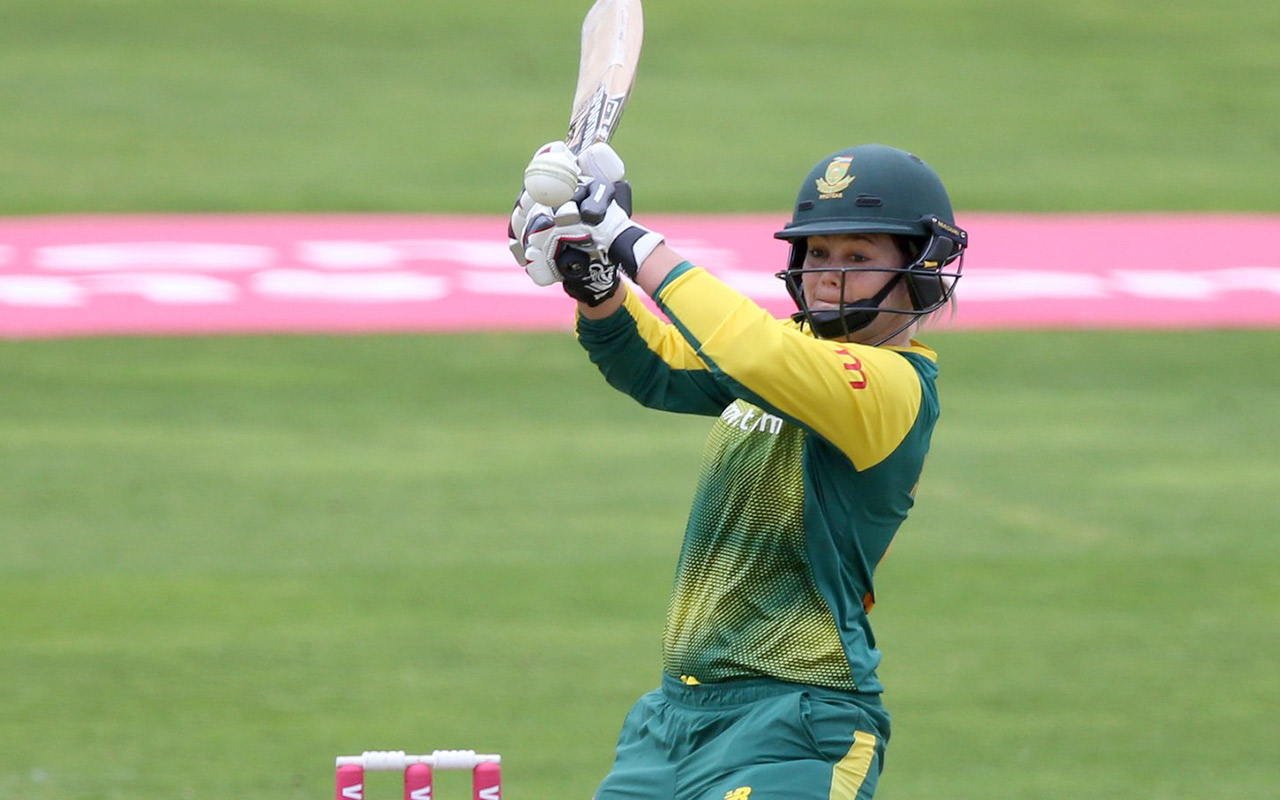 A maiden T20 international century by Tammy Beaumont set up the largest victory margin by runs (121) in the format for England against South Africa in the second match of the T20 triangular series in Somerset on Wednesday. That makes back-to-back losses for the Momentum Proteas as they completed a tough day of double-header cricket.

After winning the toss and electing to bat first, the hosts posted a mammoth 250/3 smashing 33 fours and nine sixes as they went while South Africa’s bowlers struggled to keep a lid on the imploding run rate. It was another record-breaking total against the tourists as England surpassed New Zealand’s earlier record total of 216/1, setting the highest team total in T20 internationals.

Stacey Lackay took her maiden international wicket, removing Danielle Wyatt for 56 (36 balls, 9x4s) and following up with the big one of Beaumont for a career-best 116 (52 balls, 18x4s, 4x6s) but that was the last of the good news for the tourists.

Katherine Brunt returned an unbeaten 42 off 16 deliveries (3x4s, 3x6s) and Natalie Sciver added her own well-played 33 off 15 deliveries (3x4s, 2x6s) before Shabnim Ismail bowled her out with just one ball left in the innings.

The visitors’ reply did not get off to an ideal start, losing three wickets for 22 runs inside the first seven overs. Laura Wolvaardt was dismissed for two in the second over by Brunt (2/18), followed by Lizelle Lee (19 off 14 balls) to Danielle Hazell (2/35) and Tazmin Brits who got run out by Sophie Ecclestone for a single.

Captain, Dané van Niekerk and Mignon du Preez were once again left with the job of rebuilding the innings, this time, adding 76 runs for the fifth wicket before the latter’s dismissal for 25 when she was caught by Heather Knight off Ecclestone (1/28). The skipper battled on, racking up another hard-fought half-century during difficult circumstances and ending with 72 off 51 balls (8x4s, 3x6s) with just 10 deliveries left in the match.

There were world records aplenty as the Momentum Proteas went down by 66-runs to an inspired New Zealand in the opening match of the Tri-Series in Somerset on Wednesday.

The White Ferns amassed the highest total in women’s 20-over cricket at this level when they posted 216/1. Despite a valiant effort by the South Africans, they could only manage 150/6 in reply as they slipped to defeat in the opening game of the series.

It was all about the New Zealanders though, in the opening game as they began the competition with a bang. Led from the front by captain Suzie Bates as she posted her highest score and maiden T20I century by striking an unbeaten 124 (66 balls, 16 fours, 3 sixes). It was the joint-second highest score in women’s 20-over international cricket.

And if that was not enough, the skipper added another world record to her name when she shared a partnership of 182 with Sophie Devine, the leading stand in the history of women’s T20Is.

It was also Devine’s career-best score after she clocked up 73 (48 balls, 4 fours, 4 sixes), which allowed her team to post a monumental total after they lost the toss and were asked to bat first.

Marizanne Kapp was the only successful bowler after she bagged one for 32.

The South Africans made a decent start by reaching 30 for one in the fourth over, but a cluster of wickets then saw them lose their way.

Hayley Jensen claimed three for 28 as they lost three wickets with the score on 40, including that of star opener Laura Wolvaardt for 25.

Top scorer and captain Dané van Niekerk hit 58 (57 balls, 9 fours, 1 six) and at one stage had rescued the Proteas by taking them to 119 for four following a record-breaking fifth-wicket stand of 79 with Mignon du Preez (36). In the, it was not enough to save SA from the defeat.

Photo 1 caption: Skipper Dane van Niekerk was the stand-out performer amid the ruin as the Momentum Proteas suffered a double T20I defeat in Somerset in England on Wednesday, first against New Zealand, and then against the triangular tournament’s host England, leaving SA struggling to find a way to qualify for the series final on Sunday, 1 July. Photo: @OfficialCSA on Twitter