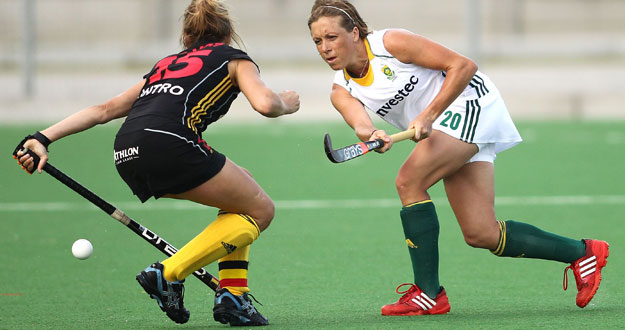 The goals came from Erica Coppey in the first half and Louise Versavel in the second, while SA were left to rue six unsuccessful penalty corners against Belgium’s one, as well as a host of other opportunities in field play that went astray.

Belgium too had chances, but SA certainly deserved to at least get on the scoreboard, if not earn a draw or win.

The third Test will give SA a chance to launch their hopes of levelling the series. The match, at Hartleyvale, has been brought forward from Friday at 6pm to Thursday at 7pm, due to the heavy hockey load both teams’ players will have to withstand over the coming week in the World league round two event.

Thursday’s match will leave just one more in the series, the final Test at 3 pm on Saturday at Hartleyvale, and the one-day break (Friday) between the third and fourth Tests will give the players a little more time to recover.

The build-up started brightly for SA fans with the public announcement that central defender Lisa Deetlefs was earning her 150th Test cap – and the team’s play reflected a better performance than in Monday’s 2-1 first Test defeat.

The improved cohesion saw Christine Roos, who made her debut on Monday, win SA’s first penalty corner and Nicolene Terblanche’s first effort, and the second from the PC that followed, were both saved by goalkeeper Nadine Khouzam.

SA continued to dominate territory and possession but Barbara Nelen on the right, and Jill Boon on the left, began making probing forays down the flanks. And 10 minutes from half-time Judith Vandermeiren made a superb run down the left, her backhand cross being tipped in at the near post by Coppey.

SA hit back immediately and Quanita Bobbs’s rebound shot from a PC flashed over the crossbar. SA came close again soon after, but the teams turned around with Belgium still 1-0 up.

Versavel increased the lead six minutes into the second half after play had swept down the right. Try as they might from the rest of the corners, as well as from field play, with captain Lenise Marais, Sulette Damons, Bernie Coston and Shelley Russell coming close, all SA’s efforts came to nought.

Belgium’s Pauline Lecles fired a great chance wide and SA keeper Sanani Mangisa saved from the lively Coppey, but the overriding impression was that SA deserved more from this match.