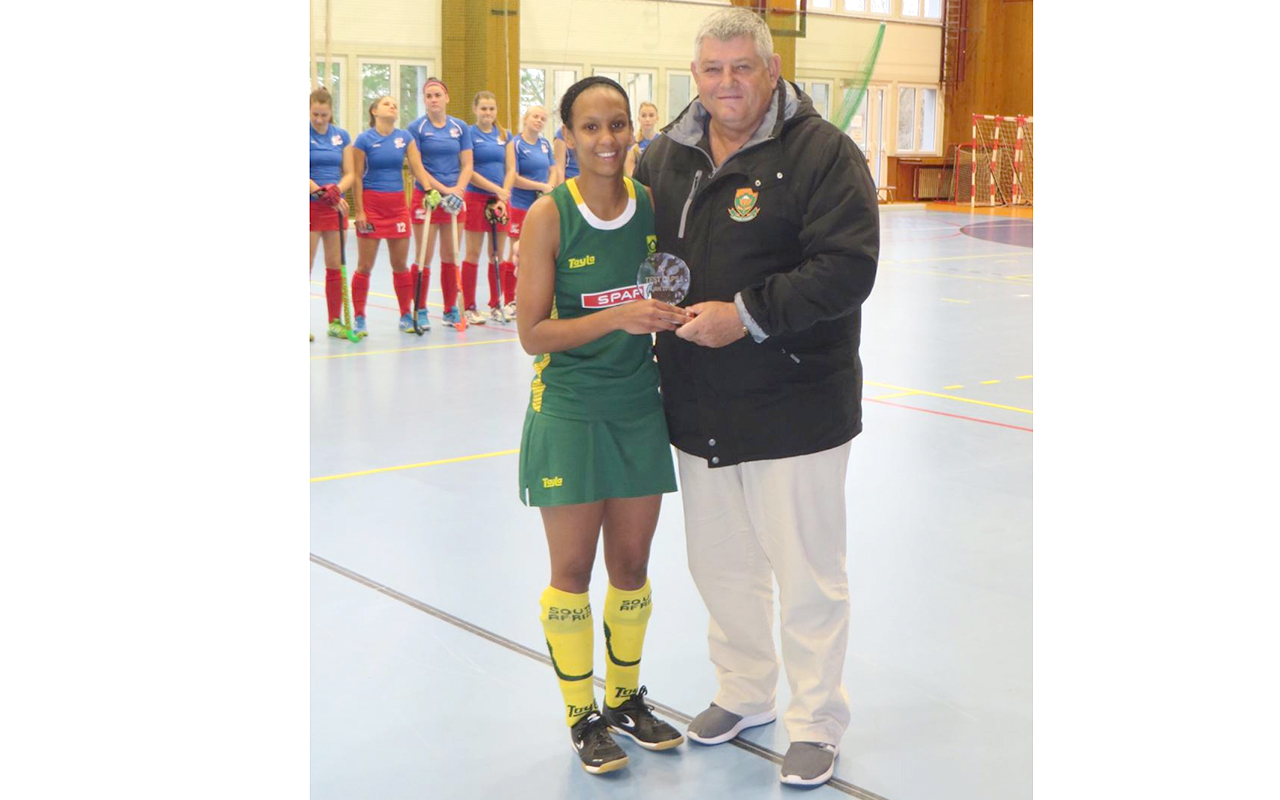 Having travelled to Europe and earned a series victory against 7th ranked Switzerland, the SPAR South Africa indoor hockey ladies would have considered their tour a success. This before taking on the Czech Republic in a four-match series. The Czech Republic are currently ranked 5th in the World while the South Africans are ranked 16th.

Having endured a nightmare 16-hour trip from Switzerland to Prague, with a mix of 5 different bus trips and 2 train trips used due to an avalanche altering original plans, the ladies suffered a 3-1 defeat in the opening test. The game saw Kelly Reed join captain Cindy Hack and Jess O’Connor as the third South African to earn 50 indoor hockey caps. The impressive Jess Lardant earning South Africa’s only goal, a late consolation from the penalty corner.

Having rested after their tormenting travel day the SPAR SA ladies looked fantastic in a highly combative 4-1 win in the morning test. The victory saw them better the mark they set in Switzerland as the new highest ranked team that any South African indoor hockey side have ever beaten.  Having led 3-0 at half time through a Tegan Fourie double either side of an Amy Greaves strike, SPAR South Africa consolidated their victory with a late Lilian du Plessis goal.

The South Africans were unable to follow it up with an afternoon victory facing a few controversial decisions that seemed to check their progress at every opportunity. Having led 1-0 through Kelly Reed and 2-1 through Jess Lardant, South Africa were disappointed to enter the break all square.

The second half saw the hosts up the physicality and emerge unscathed from the umpires. To their credit the South African ladies refused to let the umpires derail them but ultimately fell to two late goals to lose the match 4-2.

Trailing the series with one match to go at the end of an incredibly tough tour, the odds were stacked against the SPAR South African ladies. And as all South Africans know, that’s when our country is at its best. If you ever need someone in your corner, hope that it’s a South African with their backs to the wall.

After seeing off another avalanche, this time in the form of the Czech Republic’s indoor hockey team in the opening ten minutes, SPAR South Africa took control of the game and never looked back. By half time a Tegan Fourie brace coupled with a brace from captain Cindy Hack saw the South Africans lead 4-0 at the break.

They went on to win the game 7-0 with further goals from Edith Molikoe, Jess Lardant and Lilian du Plessis. In a year of significant highs for SA indoor hockey, including a Croatian Cup title, a record 22-0 test win, defeating the African Champions Namibia and of course the series victory in Switzerland, this test was arguably the pinnacle of all. South Africa had not just whispered their arrival at the top table of indoor hockey party, they had bashed straight through the door.

The game also marked the 50th indoor hockey cap for Amy Greaves, becoming the fourth player and the first player of colour to reach the milestone. It was a moment to be immensely proud of for a superb servant of the game of indoor hockey in South Africa.

Captain Cindy Hack shared her thoughts after the game: “We attacked as a unit, defended as a unit and were absolutely clinical! We have had to learn to toughen up physically and every one of our team has stepped up.

“We have learnt so much, not only as individuals but as a team. We have also learnt to raise the bar and keep it there for sustained periods of time! I’m so proud of the team and what we have achieved. Wow! We hope everyone at home will be immensely proud too!”

It ends the European tour with a record of played 9, lost 3 against two of the top indoor hockey nations on the planet. It’s a massive credit to the coaching staff in Lennie Botha, Brighty Mashaba and Team manager Robyn Morgan but also to SA Hockey and the continued support of the team from Tayla Sportswear. It would not be possible without the immense support of SPAR who are showing what a good sponsorship can do for the development of the game!