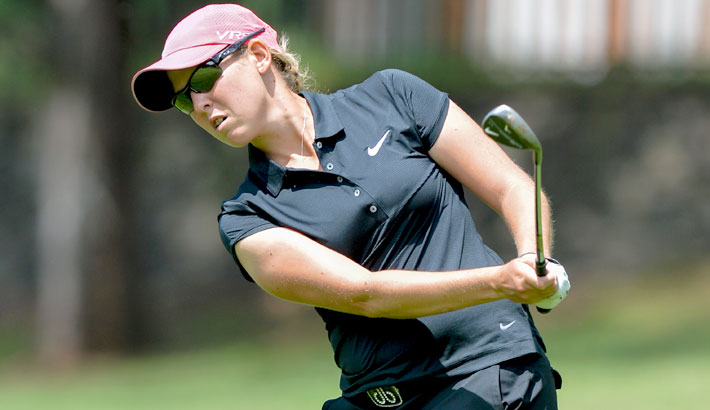 South Africa’s Ashleigh Simon tore up the Orient Golf and Country Club to claim a top seven finish in the Xiamen International Ladies Open in China, while compatriot Lee-Anne Pace enjoyed her own birdie barrage in the final round of the Sime Darby LPGA Malaysia in Kuala Lumpur on Sunday.

While South Korean Hye In Yeom closed out a five-stroke maiden pro victory on 16-under-par 272, Simon stole the march on the field to take the low round honours in the Ladies European Tour event with a sizzling six-under-par 66.

The two-time Ladies European Tour champion opened with an unexceptional 75, but subsequent rounds of 70 and 69 left her 10 shots off the pace at two under.

She kick-started her charge with a birdie at the par-three third and knocked in four consecutive birdie putts from the fifth to reach the turn at five under.

“I birdied at 10 and 11, but unfortunately I dropped a shot at the par-four 13th,” said Simon. “I left one or two birdies out there, but I played really well throughout the final round and it was nice to put a low number on the board again.

“I didn’t have a great start after our flight from Hong Kong to Xiamen was delayed. We only got in at three in the morning, and the lack of sleep caught up with me in the first round.”

The four-time Sunshine Ladies Tour champion took a break after a second place finish in the Helsingborg Open in September. “I definitely needed some R&R to recharge my batteries after eight straight weeks on the road.

“I took a full week off and had a lovely time with my family and my dogs. Then my coach Doug Wood and I did a lot of intensive work on my swing, and I feel really confident and positive about the final stretch of the year.

“I’m spending a week in Dubai with friends before the Hero Women’s Indian Open, and then it’s back to China for the Sanya Ladies Open before I travel to the States for the final stage of LPGA Qualifying School.

“Although I have my card for next season, a good finish at Q-School will improve my status, and get me more starts on the LPGA Tour next year.”

While Garcia waits to get off the reserve list for India, Chen and Stacy Bregman will skip the Hero Women’s Indian Open in favour of the LPGA Tour Second Stage Qualifier in Florida.

The pair will join First Stage winner Bertine Strauss and Ulrika van Niekerk at the Plantation Golf and Country Club from 19-25 October.

Meanwhile at the Kuala Lumpur Golf and Country Club in Malaysia, Pace overcame a bogey-bogey start with birdies at three, seven and eight.

The LPGA Tour winner set the back nine on fire with a four-birdie run from 10, dropped a shot at 14, but rebounded with birdie number eight at 15 for a five under 66.

Pace tied for 32nd on three under, while fellow South African Paula Reto finished on 13 over.

Photo 1 caption: Ashleigh Simon sizzled in the LET’s Xiamen Int. Ladies Open final round in China to claim low round honours and a top-10 finish at the the Orient Golf and Country Club. Photo: Catherine Kotze / SASPA