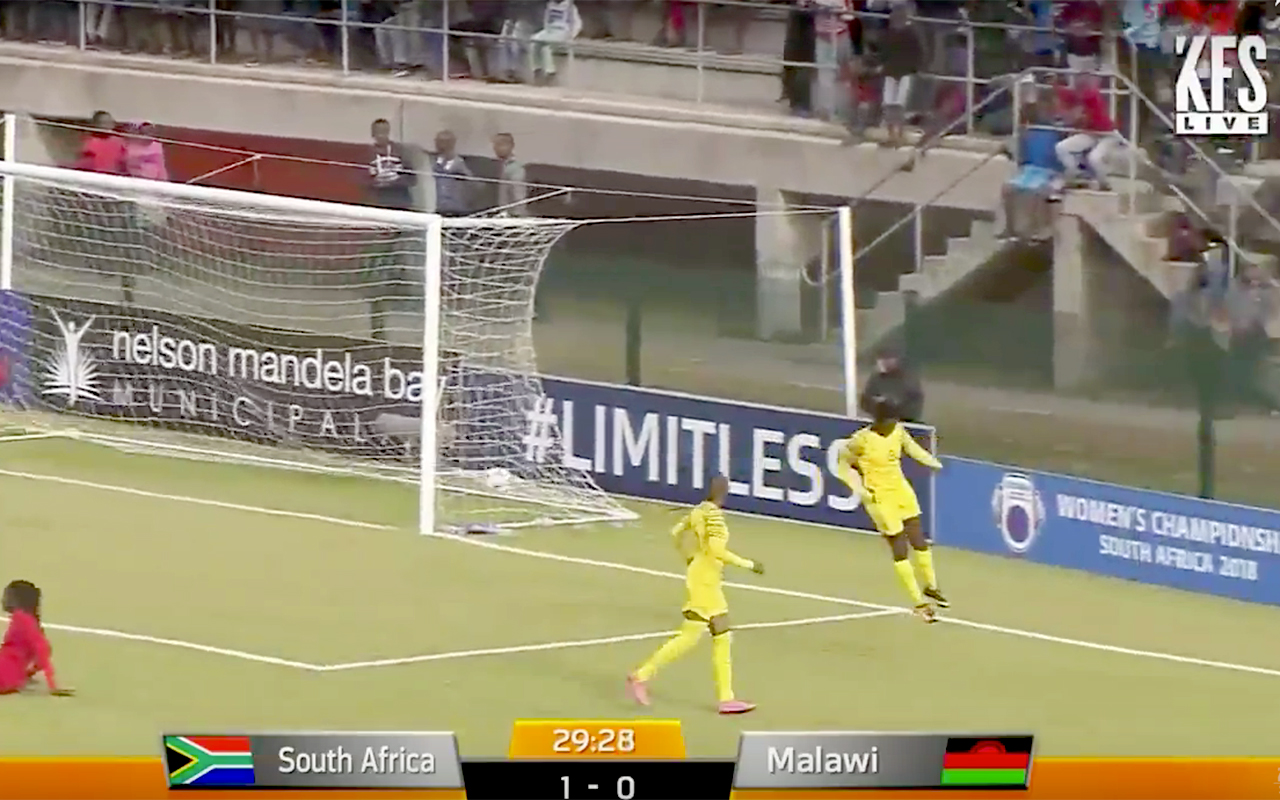 Sasol-sponsored Banyana Banyana sealed their place in the semifinals of the 2018 COSAFA Women’s Championship on Monday, 17 September with an emphatic and convincing 6-0 victory over Malawi.

South Africa were dominant in their win, with head coach Desiree Ellis playing the Houston Dash trio of Janine van Wyk, Linda Motlhalo and Thembi Kgatlana from the onset.

For Van Wyk it was a 150th international appearance, extending her record as the most capped South African player – male and female, and also highest capped female player from the continent.

The hosts took the lead on 11 minutes when Kgatlana teed-up Motlhalo on the edge of the box and the latter fired home with a pinpoint shot.

Khanya Xesi moved to joint top of the scorers charts in the tournament with a brace, the first taking advantage of a mix-up at the back for Malawi, and the second an easy tap-in after she was set-up by Kgaelebane Mohlakoana.

Mohlakoana had grabbed a goal of her own just after halftime with a shot after Malawi had failed to clear a cross.

Motlhalo, who was chosen Player of the Match for her efforts, capped a superb individual display with two late goals, the first again set up by the pacey Kgatlana, as she joined Xesi and Cameroon’s Mpeh Bissong at the top of the scorers charts.

Three out of Three sees Banyana Banyana Qualified for Semi-Finals

South Africa has won all their three matches in the group stages, scoring nine goals, and conceding only 1 – against Madagascar in the first match.

Ellis had made three changes in the match, and with the result already secured, she introduced fresh legs – bringing on Gabriela Salgado, Nompumelelo Nyandeni and Thato Letsoso (who served her one match suspension the previous game) for Mohlakoana, Xesi and Vilakazi respectively.

Banyana Banyana end on nine points, followed by Botswana on four, with Malawi on three while Madagascar return home with just one point.

But there was no such joy for 2017 hosts and finalists, Zimbabwe, as they were edged out of the top spot in Group C by East African guest nation, Uganda.

Zimbabwe will face an anxious wait to see if they will qualify for the semifinals as best-placed runner-up, though they would need an unlikely set of results to go their way.

Uganda sealed a surprise 2-1 win over Zimbabwe, with the latter missing numerous chances and being denied by the brilliance of opposing goalkeeper Ruth Atoru.

Uganda took the lead in the second period as Juliet Nalukenge was allowed too much space in the box and she was able to turn and bundle the ball home.

The Ugandans doubled that advantage when Zimbabwe goalkeeper Chido Dzingirai failed to collect a cross and captain Tracey Akiror headed home a second.

Makore grabbed a lifeline for Zimbabwe when she bundled home a late goal at the back post following Mavis Chirandu’s corner, but it proved too little, too late.

How the numbers work out for Zimbabwe

Zimbabwe have six points from their three matches with a +3 goal-difference, and they will hope that Central African guest nation Cameroon don’t defeat Lesotho in their final match on Tuesday as they already are on +6 after their thumping 8-1 success over Mozambique earlier in the competition.

In the other Group A clash, Botswana played to a 0-0 draw with Madagascar in their final Group A game which saw them claim four points and go out of contention for a semifinal place.

In the other match in the pool, Namibia thumped Eswatini 4-1 to finish in third. Lina Katuta grabbed a brace, while there were also goals for Kylie van Wyk and Lovisa Mulunga.

Celiwe Nkambule grabbed a consolation for Eswatini, her second of the tournament, but they leave the competition with three defeats.

Final Round for Group B on Tuesday in Nelson Mandela Bay

Group B will be completed on Tuesday (18 September) with Zambia favourites to advance to the semifinals as they prepare to meet Mozambique at the Wolfson Stadium at 15h00.

A draw will be enough for the Zambians, while defeat would open the way for a three-way mini-league on the head-to-head if Cameroon also beat Lesotho at the Westbourne Oval in a match that will be played at the same time.

That would mean that only the result of matches between the three sides count and with all of them on three points, it would come down to goal-difference.

The winner of the pool will play the best-placed runner-up from the three groups, which could mean another clash between Zambia and Cameroon if they both win their matches.

Entrance to both match venues is FREE to the public.

Photo 1 caption: Banyana Banyana stamped their authority on Malawi when the 2018 COSAFA Women’s Championship hosts beat Malawi 6-0 in their final group stage match in Nelson Mandela Bay on Monday. In this image, Khanya Xesi jumps for joy as her first of two goals finds the back of the net, a brace which saw her move to joint top among the tournament scorers. Image: Screengrab of the Kwese Livestream broadcast of the match on Youtube

Photo 2 caption: For Van Wyk it was a 150th international appearance, extending her record as the most capped South African player – male and female, and also highest capped female player from the continent. Image: Screengrab of the Kwese Livestream broadcast of the match on Youtube

Photo 3 caption: SA no. 10 jersey Linda Motlhalo nets the first of her three goals in the match, a feat which also places her top of the log of the 2018 tournament scorers. Image: Screengrab of the Kwese Livestream broadcast of the match on Youtube

Photo 4 caption: Linda Motlhalo smiles as she accept her Sasol Player of the Match cheque and match ball to cap a stinging performance in Port Elizabeth. Image: Screengrab of the Kwese Livestream broadcast of the match on Youtube

Photo 5 caption: Banyana Banyana coach Desiree Ellis will be quietly confident as her changes ensured the best group-stage result with three wins out of three. Image: Screengrab of the Kwese Livestream broadcast of the match on Youtube