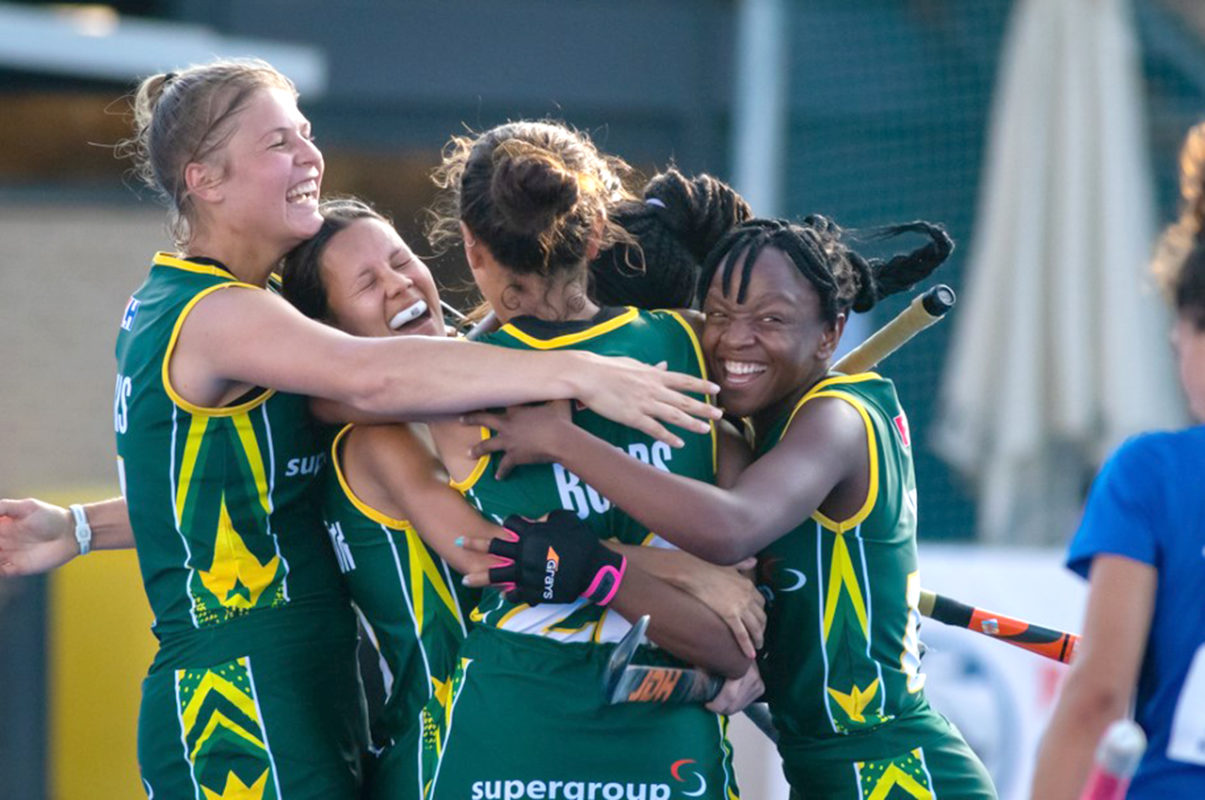 After their opening stalemate the South Africans were looking to produce a display that laid down a marker in the FIH Hockey Series Final in Valencia, and they had to do that against Italy – a team that finished ahead of them at the 2018 FIH Hockey World Cup.

Celia Evans was celebrating her 150th cap for the country. This would serve as a powerful motivator for the Supergroup South African side as a little over a year ago the 2016 Player of the Year tore her knee ligaments and had to endure the rehab and recovery to come back to the top. If ever there was a player who embodied the team motto, shared by Supergroup CEO Peter Mountford, Make It Count, you would find it hard pressed to name anyone other than Celia.

Having started the opening game against Wales as tentative as a learner driver on their first class, there was no such thought tonight as they worked about Making it Count against a very good Italian side.

The pace and focussed aggression – hallmarks of Robin van Ginkel’s coaching – was incredibly pleasing, and although the game was even in the opening half, the was a sense of inevitability when South Africa broke the deadlock on the verge of the break.

Bianca Wood has risen through the ranks for South Africa, she has starred for the SA U18’s and competed in the Youth Olympic games. Speaking on Rayder Media’s Hockey 24 Seven podcast recently she spoke of dreaming of playing for the country since she was 5 years old.

Given the opportunity now at the tender age of 19, the youngest in the team, she is determined to make it count.

And she did – in the 30th minute, when a superb through ball from Lisa Deetlefs picked her up in the D, she turned inside her defender and fired into the top left corner with a finish that Pietie Coetzee would have been proud of.

The perfect time can be before a break as it can knock the wind out your opponents sails, but also give you that little extra spark into the next phase of the game. And once again this was the quarter that South Africa dominated the most.

That domination produced 6 circle entries to just 1 for the Italians, and more importantly, the second goal for South Africa.

One of the least experienced opened the scoring for South Africa, but it was the other end of the experience cauldron that made it 2-0.

Kristen Paton superbly intercepted a lofted through ball just in the SA half, she broke up through the middle laying off to Tarryn Glasby who waited and the weighted the perfect pass through to Dirkie Chamberlain.

Having scored more than 100 International goals already, Chamberlain was never going to miss and made it count with a superb finish.

Italy did produce a late fight back with a superb final quarter, which saw them win five penalty corners and more shots at goal than in the first three quarters combined, and they managed to pull one back with 9 minutes remaining through a well-worked penalty corner variation, finished by Eugenia Bianchi.

Italy continued to surge forward after that, but the South Africans were fantastic and resolute in defence, and held on to a fantastic victory.

Next up South Africa take on Thailand on Saturday at 11:00. With Wales and Italy only playing afterwards South Africa will look to win convincingly to steer themselves straight into the semi-finals on Wednesday.

Photo 1 Caption: Bianca Woods is enveloped by her delighted team-mates after the team newbie scored a sensational shot to open scoring for South Africa, a critical blow that eased SA to a win against Italy in their second FIH Hockey Series Final in Valencia on Thursday. Photo: FHCV

Photo 2 Caption: After an under-par draw against Wales in their opening fixture, the South Africans played with pace and focussed aggression. Photo: FHCV

Photo 3 Caption: It was a memorable day for SA on the field and off, with a final Group B fixture against Thailand at 11am on Saturday where the team hopes to do well enough to progress straight to the competition semi-finals, on Wedneday. Photo: FHCV