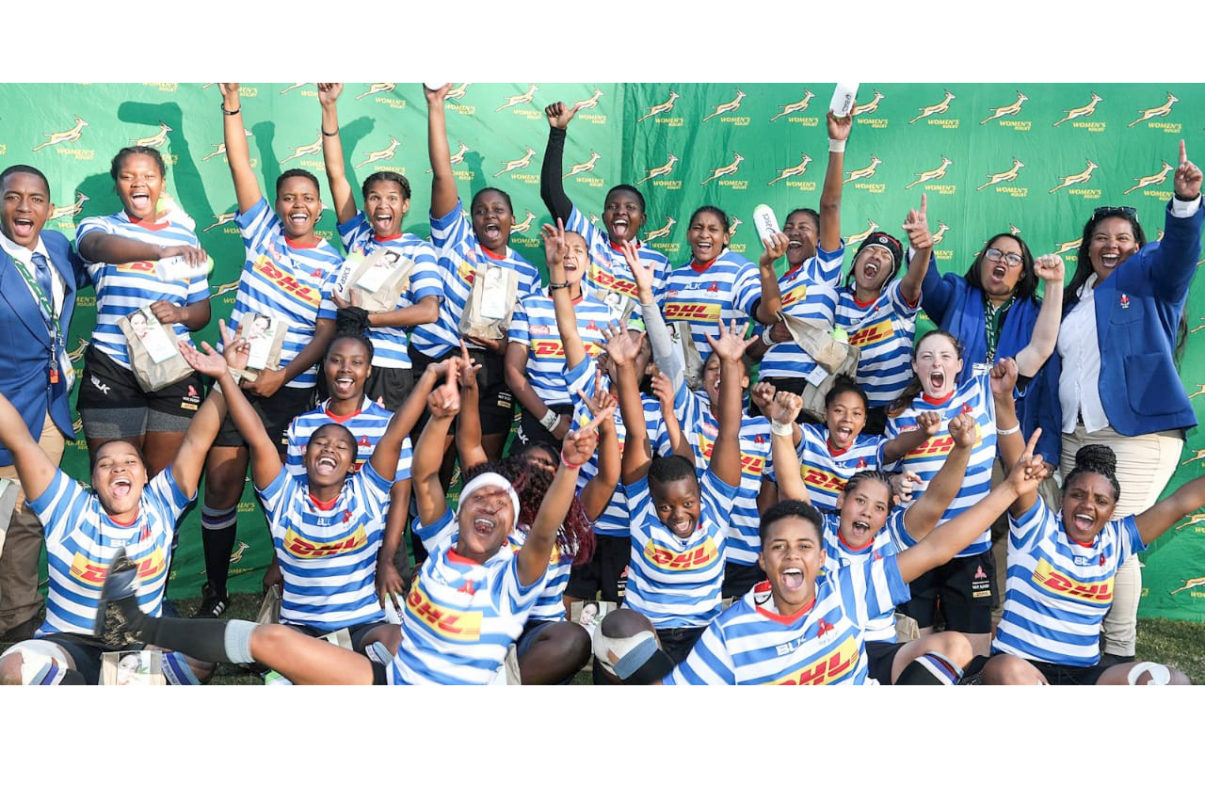 Western Province U16 and U18 Unbeaten at Rugby Week

The U16 and U18 DHL Western Province teams came through the SA Rugby Girls Week undefeated in Johannesburg, when the two national tournaments concluded at Jeppe High School on Friday.

The Under-16 team won all three matches and held sway over Border in their final match of the tournament played at Jeppe Boys High with a 41-12 win.

The Blue Bulls and SWD teams earlier played to an exciting draw in their clash, and were the only other teams not suffering defeats during the 24 matches played since Monday.

In the Under-18 Week, DHL Western Province shared the undefeated spoils with hosts, Bidvest Waltons Golden Lions, who also looked strong en route to their three wins, including a five-try win over Boland today.

The Cape side won 17-3 against the Blue Bulls to lower the Pretoria team’s flag for the first time this week.

The two tournaments provided an exciting platform for 736 female players to showcase their talents.

The Leopards finished on a strong note by totally outgunning the Free State Cheetahs team, scoring no less than nine tries in a 53-5 rout. The Bloem side did score in the first half, but then saw their defence beaten time and time again, with prop Thozama Nyeluku, no 8 Likhona Sibhenye and flanker Perseverence Kgampepe getting two tries each.

The Pumas also scored nine tries in their match against Valke, totally dominating them for a 51-0 win. Pumas no 8, Nandipha Maepa was devastating on attack, scoring four of her team’s tries.

The DHL Western Province team returns to Cape Town undefeated after yet another good showing at the week, beating a strong Border team 41-12. They were in command at the break, leading 22-0 and continued their dominance afterwards, with six players dotting down in total.

The EP Elephants proved too strong for Limpopo Blue Bulls, winning 25-5 after leading 8-0 at the interval. The Eastern Cape side outscored the Limpopo team three tries to one, and had flyhalf Byrhandre Dolf in fine form with the boot, kicking two conversions and two penalties.

The Sharks ruined a fine week for the Bidvest Waltons Golden Lions, beating them 24-20 in a come-from-behind effort. The tournament hosts were up 20-5 at the break, but the power of prop Sinothile Bhengu and the speed of scrumhalf Nompumelelo Gumede proved too much in the second half as the Sharks overhauled them with a brace of tries by both players.

Griquas and Border Country Districts produced an entertaining match, with the latter prevailing 31-10. Seven tries were scored in the match, which saw superior support play by the Border team delivering them the win.

Boland outplayed Griffons 29-7 thanks to a strong first half where they scored four tries to nil to lead 22-0. The Griffons responded with a converted try in the second half, but a second try to Boland flyhalf, Lee-ann Yman thwarted any further comeback efforts.

The Blue Bulls and SWD Eagles played to an exciting 26-26 draw. The Pretoria side looked in control at halftime, leading 19-7. The Blue Bulls no 8, Marema Mpya scored a hat-trick of tries, with her third seemingly putting the game out of reach. SWD rallied late though, with centre Ne-dicha Gysman scoring to even the scores.

The Pumas outplayed the Leopards 42-20 in a match that delivered ten tries, with Pumas prop, Kamu Mokoena, getting three for her team. The Pumas were leading 28-10 at the break.

Griquas finished their campaign on a high by beating arch-rivals, Free State 19-5 in a tight match. The Kimberley side, boosted by two converted tries from centre Vianca Boer, outscored their eastern neighbours three tries to one.

It was a good team effort from the Border Country Districts side in their final match, blanking Griffons 27-0 while scoring five tries themselves. All five were scored by different players, with the four scored by the backs showing the dominance they had over their opponents.

Bidvest Waltons Golden Lions produced one of the best performances of the week in their 31-5 win over a very capable Boland side. The hosts won all three matches they played, but this five-try romp was their best. They dominated the first half, leading 26-0 at the break and then showed good game management in securing the win.

The match between EP Elephants and Sharks was a nail-biting affair. The Elephants scored first through hooker Asanele Wellem for a 5-0 lead at the break and that proved decisive. Both teams scored twice in the second half, but EP never surrendered the lead.

Old Mutual Zimbabwe also had a strong finish, beating SWD Eagles 31-10. They were on fire in the first half, with four tries in quick succession to ease into a strong 31-0 lead at the break. The Eagles played much better in the second half and pulled two tries back, but Zimbabwe kept their heads to win.

The Border team proved a handful this week, scoring 13 tries in all, with six of those coming in a comfortable 36-12 win over Limpopo Blue Bulls. The Border side was 12-0 ahead at the break and scored four second half tries as they pulled away from their opponents.

The DL Western Province team claimed bragging rights at the tournament with their 17-3 win over the Blue Bulls. The first half was a tight affair, with winger Alichia Arries dotting down for Province and the Blue Bulls responding via a penalty by flyhalf Cornelia Walker.

The second half opened up and the scoring opportunities arrived for the Cape side, who scored two more tries as they laid down the gauntlet to the Bulls.

Photo 1 Caption: Both the U16 and U18 DHL Western Province teams came through the SA Rugby Girls Week undefeated in Johannesburg at the annual tournament, which concluded at Jeppe High School in Johannesburg on Friday. Photo: @YouthWeeks on Twitter