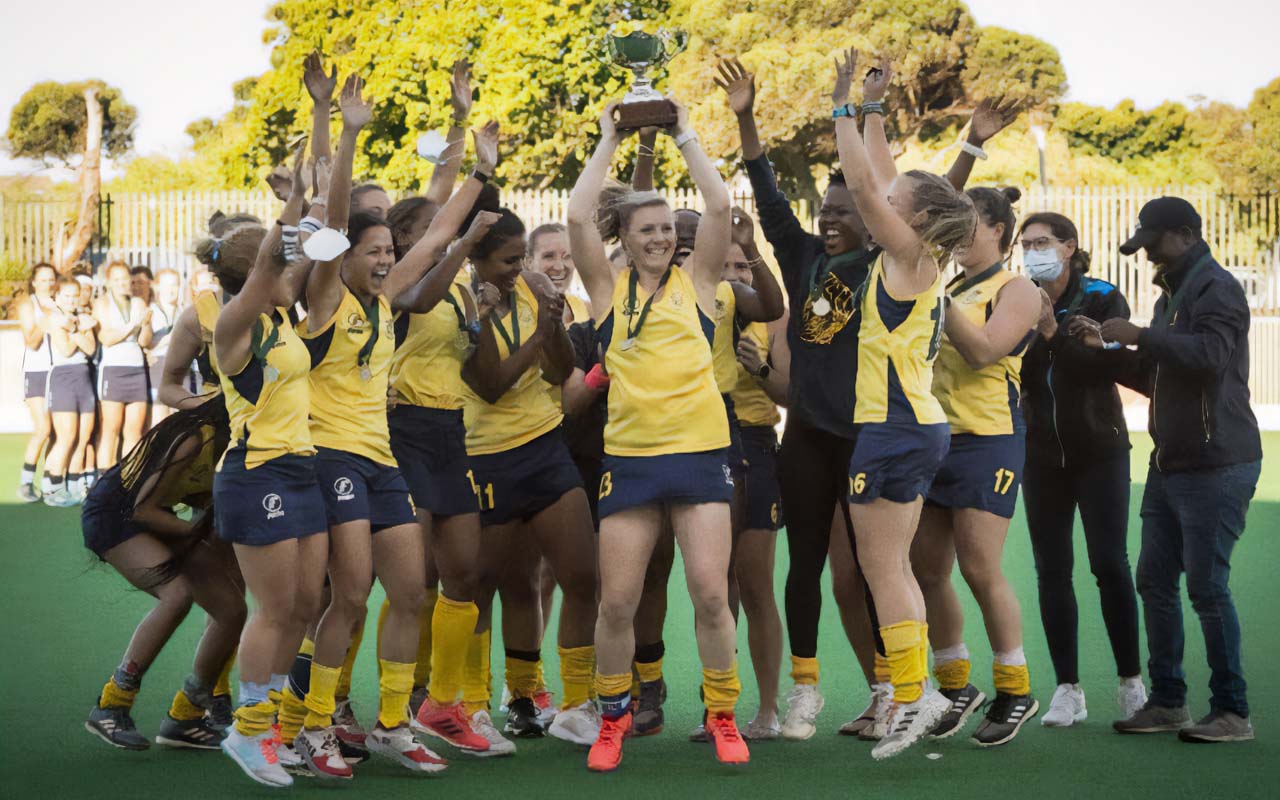 Southern Gauteng are savouring their third Women’s Hockey IPT title in five editions after beating old rivals Western Province in the final at Hartleyvale Stadium on Saturday, in a repeat of the 2018 final.

Southerns won 2-0 in a tense penalty shoot out after scores were tied at 2-2 after regulation time.

The game started with a blistering pace and the 2018 champions stunned the hosts with a goal inside the opening two minutes. The penalty corner was smashed in by Lezaan Jansen van Vuuren, but the ball bounced back and Sylvia van Jaarsveldt showed the quickest reactions to net brilliantly. It was her second IPT final goal in a row, having scored in the defeat in 2019.

Western Province of course had trailed in the semi-final and didn’t have any doubt that they would bounce back. They probably didn’t think it would be within 60 seconds though. Nicole Koenig crossed the ball and when the Southerns players failed to clear it Tarryn Lombard was on hand to put it into the back of the net.

Somehow Southern Gauteng failed to extend their advantage as first Robyn Johnson and later Kristen Paton both struck the inside of the upright and the ball ricocheted out and to safety.

It looked like those near misses could be costly as Western Province took the lead in the third quarter. Quanita Bobbs – who had a sensational tournament – fired a beautiful low penalty corner into the goal. It was her fifth goal of the tournament and she really led from the front throughout the day.

The partisan crowd, limited in size due to Covid restrictions, were a welcome accompaniment to the game as they cheered both sides on gainfully, with an obviously acceptable level of bias towards the hosts. As the quarter was winding down though it was the visitors who restored parity. Robyn Johnson reacted to a mis-trap in the circle and managed to fire it into the bottom corner past Berne van Wyk. It was Johnson’s third IPT Final goal in her career, with one at indoor and two in outdoor tournaments now. Definitely the big game player.

Both sides tried constructively to find a third goal and go ahead but the likes of Stephanie Botha and Carmen Smith marshalled their defences superbly. Despite a helter-skelter five minutes to finish the game it ended tied and the third IPT in a row would be decided on penalties.

Once again there was on opportunity for a hero and once again it was Mmatshepo Modipane as she denied all four showdowns, to complete an incredible 100% record over two shootouts in the tournament. That left the task as a simple one which Toni Marks did with zero complaints. Netting the goal that ultimately sealed the title for the Johannesburgers. Their third in the last five editions of the IPT.

Speaking to gsport after a satisfying IPT campaign, Southern Gauteng High Performance portfolio holder, Tsoanelo Pholo, said: “It was the sweetest victory beating our very competitive counterparts. There’s massive mutual respect between the two teams and we are happy to have given hockey lovers a final we all deserved.”

Reflecting on the heroic efforts of goalkeeper, Mmatshepo Modipane, Pholo said: “Mmatshepo is one the hardest working athletes in the country and it showed when it counted.”

Pholo believes the break allowed for new talent to develop.

“It was amazing to see the growth. SA hockey in it’s entirety is in the rebuilding phase having had the Tokyo Olympics games this year and a very full international schedule planned for 2022.”

In the bronze medal match it was a battle between the Fourie sisters as Tegan (Northern Blues) took on Cerian (SPAR KZN Raiders) for a bronze medal. After 55 minutes of a juggernaut arm wrestle, it was the Blues that broke the deadlock as Marguerite van Wyk popped up at the back post to score the goal that would ultimately settle the game. They did add late gloss to the score line through Nicolene Terblanche to take bronze home with an exciting young side.

The SA U21’s found their trigger today with Edith Molikoe being particularly pleasing in the middle while Bianca Woods netted a hat-trick in a 9-0 demolition job over Free State. It was a performance that made coach Lenise Marais incredibly happy and one that set the team up nicely for the Junior World Cup just over a month away.

Eastern Province won the battle of the wooden spoon needing a dreaded penalty shootout to seal the victory after a wonderfully entertaining battle with WP Pens.

Final Results of the 2021 Hockey SA Women’s Inter-Provincial Tournament, at the Hartleyvale Stadium:

Copy by Hockey SA with editing by gsport