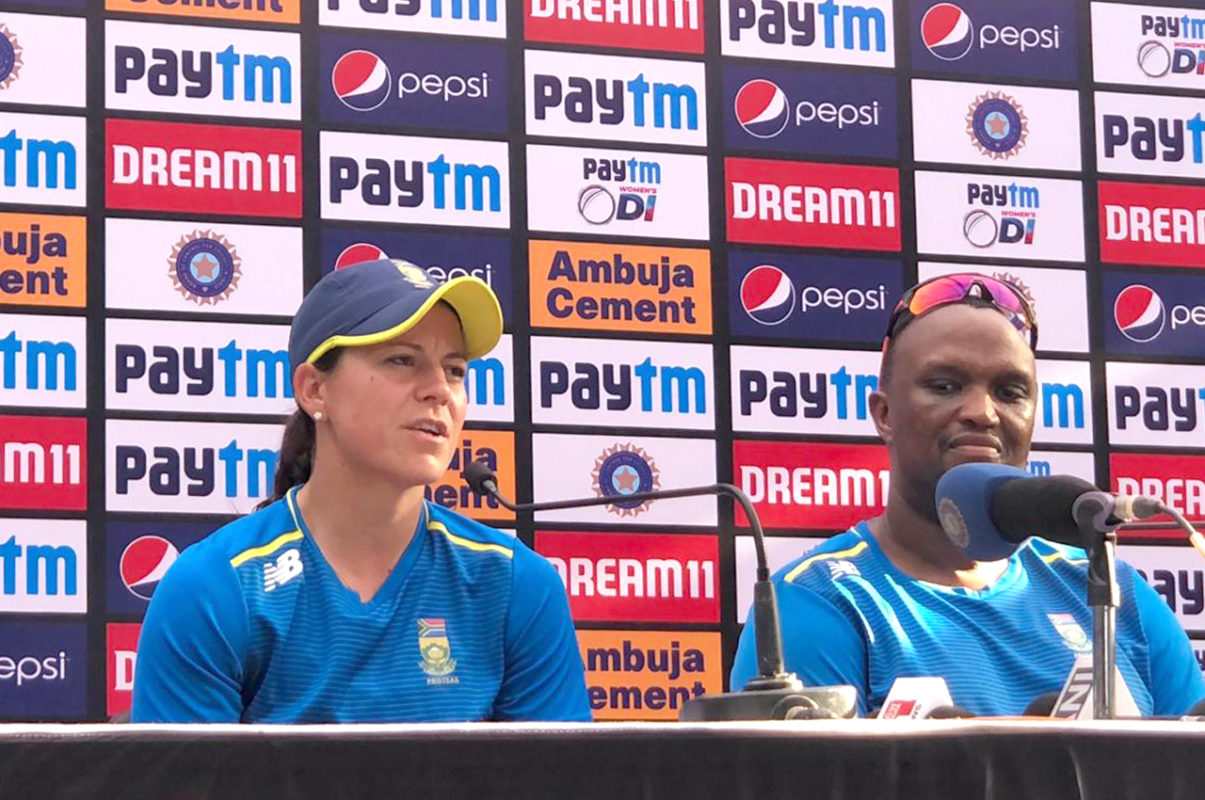 India have beaten South Africa by six runs in the final ODI in Baroda to secure a 3-0 series whitewash.

Chasing 147 to win, South Africa lost wickets regularly as India’s spinners dominated them, picking up nine of the 10 wickets to fall.

It started well for SA with the bat as Lizelle Lee got off to a bright start but her innings was cut short on 13 off 18 balls, when she was caught behind off Mansi Joshi for 13 off 18.

India brought on spinner Ekta Bisht in the 8th over with SA 30/1 and she found immediate success when she had Trisha Chetty caught by Deepti Sharma in the slips for 7 off 16 balls.

Just as Mignon du Preez and Laura Wolvaardt were getting into their work and SA reached 50, du Preez offered an easy return catch to Sharma and was out for 10 off 20 balls.

The spinners continued to dominate as Rajeshwari Gayakwad offered half an appeal and Wolvaardt was adjudged LBW for 23. SA were in a spot of bother at 54/4 with two new batters at the crease.

Gayakwad struck again soon after when she bowled Lara Goodall with a ball that turned and bowled the big hitting left hander for 6, with SA losing 4/32 as India’s spinners pounced.

Shikha Pandey returned to the attack in the 24th over as India tried to break the momentum that Marizanne Kapp and Suné Luus were building.

The duo kept going and brought up SA 100 in the 29th over as they calmly built a partnership, but Indian spinners were back at it as Ekta Bisht caught and bowled Luus for 24 off 53 balls, with SA still needing 43 more runs to win.

Ismail came to the crease and took up the fight with Kapp until the latter’s resolute innings came to an end, adjudged LBW off Sharma for 29 off 43 balls.

Shangase then combined with Ismail to take SA within 10 runs of victory before she was out, the ball ricocheting off Bisht only for Joshi to pouch the catch at mid-off.

Ismail then went for a big shot off Kaur and was caught on the boundary by Raut for 11.

Tumi Sekhukhune was the final batter out, caught at slip by Sharma off Rodrigues for a duck as the Proteas Women were bowled out for 140.

SA Delivered with the Ball

Earlier, India won the toss and elected to bat first.

After a disappointing outing in the last game, South Africa’s bowlers were right on the money: First, Shabnim Ismail had Priya Punia caught by Trisha Chetty down the legside off a short delivery, and then Lizelle Lee held onto a wonderful low catch off the bowling of Marizanne Kapp to dismiss the dangerous Jemimah Rodrigues for 3.

India were in early trouble on 8/2.

India’s stars from the last game, captain Mithali Raj and Player of the Match Punam Raut got together at the crease and threatened to repeat their heroics, but Kapp changed ends and struck Raj in front, only for it to be given not out.

A couple of quiet overs followed and the pressure built, which saw Raut play a reckless shot and she was bowled by Ayabonga Khaka for 15 off 33 balls, leaving India 23/3 in the 12th over.

Captain Suné Luus did well to rotate her top three bowlers and it paid off as Kapp struck a crucial blow in the 17th over, when Mithali Raj was well caught by Shabnim Ismail for 11 off 42 balls. India were in trouble at 39/4.

To illustrate the pressure created, SA had bowled four maidens by the 17th over and by the 20th over, India had only scored four boundaries.

India’s 50 came up in the 22nd over as Kaur and Sharma negotiated the tight SA bowling in a bid to rebuild their innings, but their partnership didn’t last long, as Lee held onto a blinder in the gully off Ismail’s bowling, to see the end of Sharma for 7.

Khaka changed ends in the 25th over as Luus kept turning to her three main strike bowlers.

Aside from one or two bad balls, SA kept up the pressure, which Kaur and Bhatia did their best to absorb as they built a partnership.

Tight Bowling by SA Made the Difference

Spin was introduced for the first time in the 29th over, with Shangase brought into the attack, and then Luus brought herself on from the other end in the next over, as SA progressed to spin from both ends.

Luus struck immediately, bowling Bhatia around her legs for 6, and India fell deeper into trouble at 71/6.

Ismail was brought back into the attack in the 33rd over, replacing Shangase at the commentary box end, as SA went in for the kill.

Shangase took over from the Pavillion end as Luus looked to keep the batters on their toes.

But Pandey and Kaur found some rhythm and the boundaries flowed, forcing Luus to bring back Khaka, but even she was hit for four as the partnership reached a positive 40 from 49 deliveries.

The duo transferred the pressure to the fielding side, who suddenly faulted when they had been brilliant in the field throughout the innings.

Kapp was brought back into the attack, and she made an immediate difference, bowling the dangerous Kaur for 38 to break a defiant stand of 49.

South Africa could have had Pandey on 34 when she was dropped by Sekhukhune at point off Shangase’s bowling, and India were 133/7 after 42 overs.

Sekhukhune made up for it in the next over when Pandey was well caught by Khaka at mid-on, as her cameo of 35 from 40 balls came to an end to leave India 133/8.

Lee bagged her third catch of the innings as Ekta Bisht was out for 6 off Khaka’s bowling, and then Khaka held on to a good catch at mid-off that saw the end of Mansi Joshi for 12, and India were bowled out for 146 in 45.5 overs.

Kapp was the pick of the bowlers with 3/20, and she was ably supported by senior bowling partners, Ismail and Khaka, who bagged two wickets a piece.

A much-improved performance from the SA bowling unit.

Photo 1 Caption: India have beaten South Africa by 6 runs in a tense finish in Baroda to secure a 3-0 series whitewash, their spinners dominating as the Proteas Women were all out for 140 chasing 147 to win the final match. Photo: gsport

Photo 2 Caption: All three ODI’s have been played at the Reliance Cricket Ground in Baroda, Gurarat, and after suffering disappointment in the first two fixtures, the South African bowlers made a huge improvement that gave the batters a chance to take the side to an only win, but it was not to be. Photo: gsport

Photo 3 Caption: With the series won by the hosts India in the second ODI, The Proteas Women played for honour in the last fixture, and despite the bowlers giving the visitors their best shot at claiming an away win, Indian spinners forced a batting collapse that won the hosts a home series white-wash. Photo: gsport