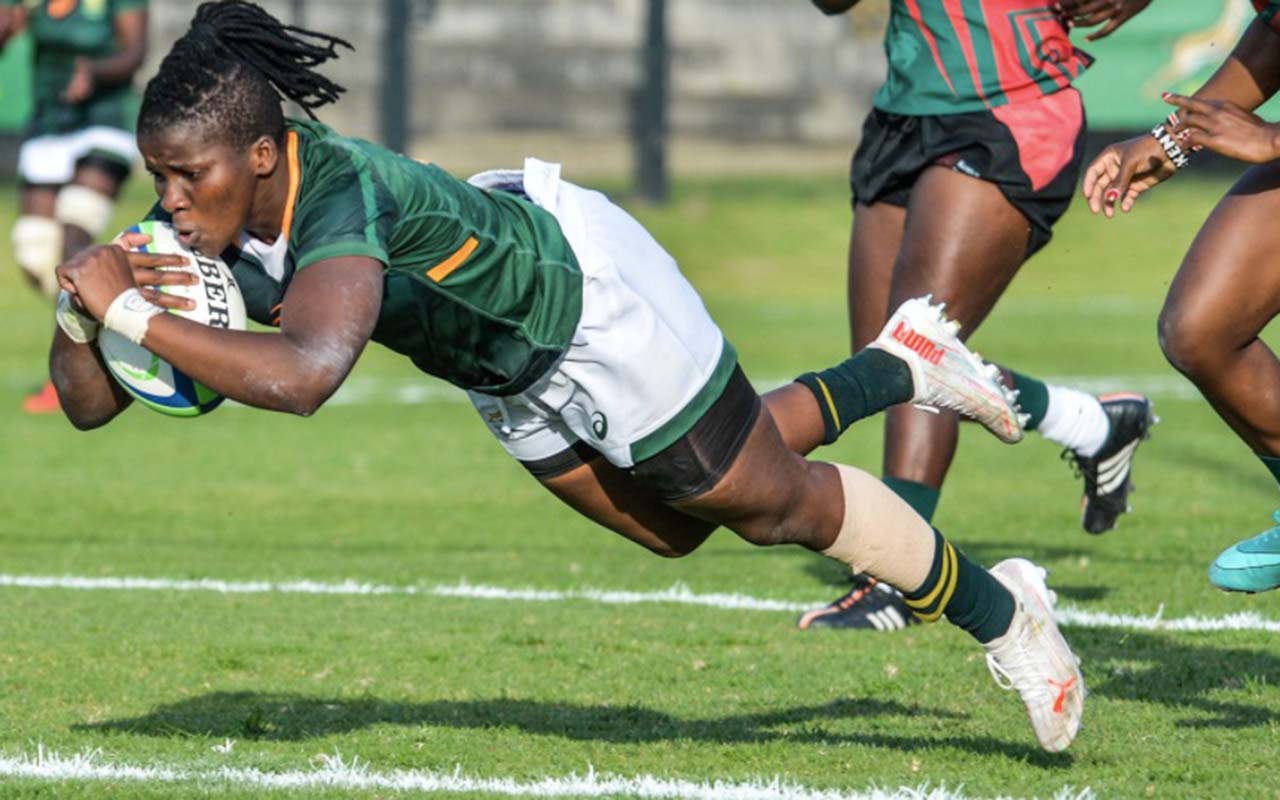 The Springbok Women leading 17-12 at the break, had to overcome a strong second half surge by Kenya and needed a late try by their captain, Lusanda Dumke, to beat the East Africans 29-22 at Danie Craven Stadium in Stellenbosch on Monday, 16 August 2021.

The victory secured the South Africans a 2-0 win in the series, after they beat Kenya by 66-0 in the first Test last Thursday.

This time around, Kenya made 11 changes and included a host of their sevens players from the Olympic Games in Tokyo, and the added speed to their team created all sort of problems on defence for South Africa.

Bok Women coach Stanley Raubenheimer also blooded some new players and one of those, outside centre Jakkie Cilliers, had a dream debut, scoring a try, which she converted herself, and kicked a penalty goal as she showed a good aptitude for this level of rugby.

Cilliers was replaced in the second half by Libbie Janse van Rensburg, who debuted off the bench last Thursday, and she also proved very strong, scoring the try that drew scores level after the Kenyan surge early in the second half.

Raubenheimer said he was pleased with the way the likes of Cilliers and Janse van Rensburg performed, as he is building depth in the squad as they prepare for next year’s Rugby World Cup in New Zealand.

“I saw Jakkie play for the Leopards in the First Division and immediately realised that her kicking attributes could work for us,” said Raubenheimer.

“She has a massive boot and we saw today how effective that can be. The same with Libbie, who excelled in the Premier Division for the Blue Bulls.

“On Thursday, she had a nervous debut, but she was excellent today and gave us some much-needed front foot ball. These are the type of matches we need to grow us as squad and for the players to realise the step-up between provincial and international rugby.”

Raubenheimer credited they Kenyans for their performance: “We knew they would be a different side today and they did not disappoint. It was a real test for us, and I will be the first to admit that we were anxious in that second half, as things were going their way.

“That is why we need to play more matches, we need to be tested and learn to play under pressure, then we will get better and better,” he said, adding that the series win will give his team’s confidence a big boost.

“Some Test matches will be won ugly and today was one of them. The younger players will be better after this and it was a good test for us.

“We need to expose players and today it was clear that they will grow from matches such as these. The character of the side will only grow over time and exposure to Tests, so we are really grateful for these two matches against Kenya,” he added.

Kenya Regain Their Form in the Second Test

It was clear that the visitors were keen to improve on their performance from last week, and the early helter skelter nature of the game provided an entertaining start to the match. Lost lineouts, turn-overs and very good defensive hits highlighted the opening five minutes.

Sadly, for South Africa, they lost hooker Micke Gunter in the opening stanza, and she was replaced by another debutant for the national team, Buhle Sonamzi, who delivered a very strong showing on defence and breakdown play, but she struggled to find her jumpers in the lineouts.

Raubenheimer wanted some training field moves executed during the match and the very first of those, with his team effectively executing the new 50:22 law trial, almost worked to a tee. Unfortunately, the Kenyan forward disrupted the resulting lineout and the hosts failed to set an effective maul.

It was the start of a slow squeeze however, as the pressure applied by the Springbok Women kept the Kenyans pegged down in their half of the field.

A number of scoring opportunities went begging, but when Kenya lost the ball in a lineout near their own line, Dumke was on it in a flash and over the line before the Kenyans could react. Zenay Jordaan slotted the conversion and after 20 minutes, the territorial dominance was reflected on the scoreboard, with the hosts leading by 7-0.

Kenya struck back with a long range try that started in their own 22 when flyhalf Grace Adhiambo finished off a delightful attacking move.

Cilliers, used with good effect to kick booming touch finders, then first secured a turn-over before a strong run saw her dotting down in the corner. She slotted the conversion from way out and added three more with a penalty goal that pushed the lead out to 15-5.

However, Kenya scored another good try just before the half-time hooter to leave the field with some confidence for the second half, with winger Christabel Lindo finishing off another flowing move.

Kenya started the second half like they finished the first, with another long range try. This time, fullback Janet Musindalo jumped into the line at pace and had too much speed for the South African cover defence. The try was converted and Kenya took a 19-17 lead after 50 minutes.

Adhiambo then kicked a penalty goal to put the lead out to 22-17.

South Africa, totally dominant at scrum time, used this phase to good effect and it tired out the Kenyan defenders. It was a matter of time before the SA side was going to score and when Janse van Rensburg scored from a good scrum set up, it evened up scores.

The last five minutes was a frenetic affair and while Kenya looked dangerous on the counterattack, the South Africans kept pressing.

With two minutes left on the clock, Dumke crashed through a number of defenders to score under the posts. Jordaan added the extras as South Africa took a 29-22 lead, which they did not surrender.

Photo 1 Caption: The Springbok Women leading 17-12 at the break, had to overcome a strong second half surge by Kenya and needed a late try by their captain, Lusanda Dumke (pictured) to beat the East Africans 29-22 for the Series win, at the Danie Craven Stadium in Stellenbosch on Monday, 16 August 2021. Photo: WomenBoks (Twitter)