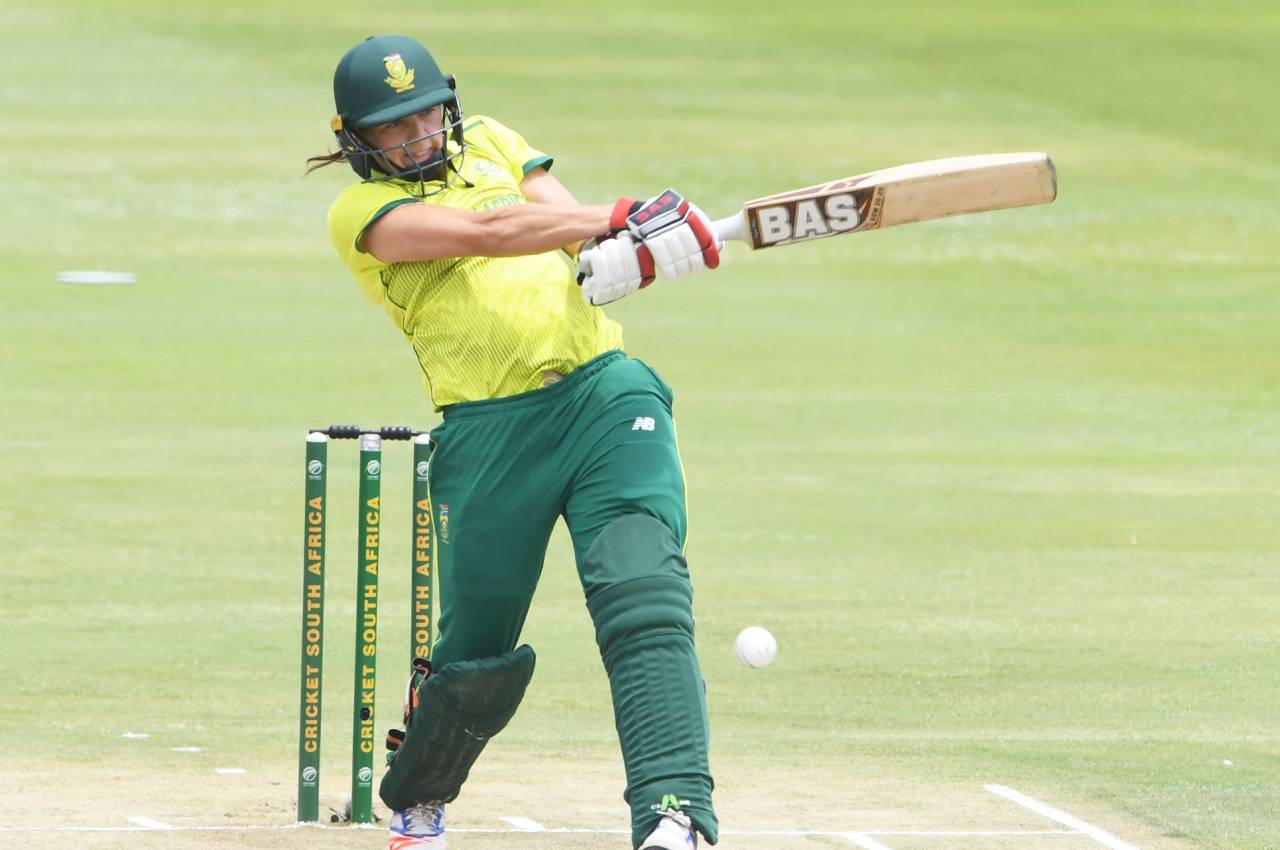 It is said that one can only genuinely enjoy the mountain top view if you have travelled the long winding road to get there.

The life of South African cricketer Tazmin Brits embodies this spirit, which includes over a decade in sport.

She has the firepower and determination to succeed even if it means re-evaluating her dreams after a life-changing accident.

In 2007 Brits won gold in the javelin throw at the World Youth Championships and was selected to represent South Africa at the London Olympics in 2012.

At the prime of her javelin career, Brits’ life took a 360-degree turn.

She was involved in a serious car accident that left her hospitalised for two months, shattering her dream of playing on the world’s biggest sporting stage.

With a life so vibrant and filled with an extremely bright future now under threat with uncertainty and excruciating pain, she admits that on a number of occasions she attempted to end her life as she also lost sponsors and her bursary.

She eventually took on odd jobs to get her mindset back on track. It was in 2018, after a couple of eye-catching performances for North West cricket that she made a debut for the Proteas Women team against Bangladesh.

With a second chance at life, Brits is eager to make the most of every moment as her greatest ambition is to be successful and happy.

Tazmin, pleasure speaking to you! How’s life been for you over the past few months without having live sport to plan for?

This lockdown has come as blessing in disguise. It has not only given me more time to train but it has also allowed me time to reflect on life and the importance of being as well as the way forward.

What have you been doing to work on your fitness?

I have basically rigged up a home gym as am I fortunate enough to have the necessary equipment. I train twice a day doing weight training and cardio.

What is the biggest lesson you have learnt from this pandemic?

I have learnt how quickly the rug can be pulled out from under you and that although is a cliché, one should not take things for granted. I have also learnt that while social media is great and has opened new avenues during this time nothing beats face-to-face or physical contact.

Please tell us about your sports journey and where it all began for you.

My journey began at the age of six when I played rugby with the boys at school and my mother could not understand why the buttons on my school shirt were always missing (chuckles). All jokes aside it started with Bakers mini-cricket at first.  Not being content with a sponge ball I wanted the real deal and asked if I could please play cricket with the boys. This led to me being selected for the Boys KOSH team for three-years in a row. I also played indoor cricket and during this time a teacher from the Klerksdorp Technical Hight School approached me to play cricket for the high school girls’ team.

“My parents saw my potential in being a javelin thrower and found me a wonderful coach, Willem Geyer. I then went on to win numerous titles and championships, the World Youth Championship being my ultimate achievement. A serious car accident in 2011 brought my Olympic dreams to a sudden halt!” – South African sportswoman, Tazmin Brits.

I also played tennis and hockey and had been selected for the North West tennis and North West hockey teams. I was also an avid running and swimming athlete.  My javelin career started at the age of 11.  I was able to throw further than most of my counterparts but had difficulty getting the javelin to peg and at that stage it was one of the rules. This later changed and it was only necessary for the point of the javelin to make a mark on the surface. My parents saw my potential in being a javelin thrower and found me a wonderful coach, Willem Geyer. I then went on to win numerous titles and championships, the World Youth Championship being my ultimate achievement. A serious car accident in 2011 brought my Olympic dreams to a sudden halt!

Your accident… Please tell us about that time and how it changed your life?

At the time of the accident I was at the prime of my javelin career. The day of my accident I had qualified for the Olympic games and went through to Potchefstroom to celebrate this achievement. My Olympic dream was shattered within a split second.  Along with the loss of my dream went with all my sponsorships and my will to live. I attempted to end my life on more than one occasion. I felt lost and had no direction.  Even though I had the support of my parents and family I wanted nothing to do with anyone and just wanted to be on my own. The accident not only affected me, but it took its toll on my parents as well.

How it changed my life…I had to start my life over again in a place where I ideally did not want to be. I no longer had a university bursary and was not even sure if I wanted to pursue my studies. As I previously mentioned, I had no direction! I started to waiter full time at a local restaurant. I felt I needed to get out of Klerksdorp to clear my head and think about my future.

“During this time, I was approached by the NWU to throw javelin for them again. I was given a small bursary and my studies and sporting career started again.” – Brits speaks on getting back into sport after a car accident.

I then moved to Johannesburg and worked at the Woodmead Pro Shop. I put everything into this job and was top salesperson for six months in a row. Making money was not a bad thing but being lonely and away from my family began to get the better of me. I then called my parents and told them that I needed to come home. I took up an apprenticeship as an Instrument Technician on the mine where my mom worked. During this time, I was approached by the NWU to throw javelin for them again. I was given a small bursary and my studies and sporting career started again.

What was the decision based on that after the incident you switched to playing cricket?

As I was trying to make a comeback with javelin, I got a call up in 2018 to play cricket for the Proteas Women team. I played my debut match against Bangladesh during their tour in South Africa. I saw this as God’s way of opening a new door for me as well as giving me a different challenge playing a team sport.

After having a second chance at life, what was going through your mind and what did you want to achieve going forward?

Having a second chance at life and being as passionate about sport as I am, I thought that if I was not ever able to play sport again I would dedicate my time, knowledge and experience to help people to achieve their dreams. I continued my studies in Sport Science and hope to use this to the best of my ability.

What have the past few years been like for you as you embark on this journey?

The past few years have been challenging at times. Being part of the Proteas squad is a great honour but remaining positive when not being chosen for the World Cup or not being contracted is difficult morally and financially.

What have been some of your biggest challenges?

Getting up every day and training, remaining fit, working hard at your game and then not being selected for an important tour or event and then having to do it all over and hoping for a different or better result, especially when it is your ultimate goal.

What are your thoughts on the current state of women’s cricket in South Africa?

I wouldn’t want to touch on it…

Fair enough. At grassroots level, do you think enough is being done to ensure that more young girls have the opportunity to play the sport?

“Young girls need to know that there is a future or a career in cricket, especially now since more is being done for women’s cricket.” – Brits enlightens young girls about the opportunities in taking up cricket.

I don’t think so as the focus is always on boys. Young girls need to know that there is a future or a career in cricket, especially now since more is being done for women’s cricket. Women’s cricket needs to be marketed better for young girls to know what is out there for them.

What differences would you like to see taking place going forward for us to grow the sport?

I would like to see more contracts be awarded to players and maybe even leading into provincial teams the same as the men. The reason for this is that you would then not require a job to survive financially and can spend more time focusing on cricket as a career.

Which female cricketers inspire you and why?

Australian cricketer, Betty Wilson. She was considered one of the greatest women cricket players of all time. In 1949 She became the first female cricketer to score a century and to take a five-wicket haul in an innings in a women’s test match.

What are some of the highlights of your sporting career so far?

Winning the World Youth Championships in 2007 at the age of 16 for javelin. Representing South Africa in 2014 at the Longest Drive World Championships (golf) in Mesquite, Las Vegas and obtaining fourth place and lastly, making my debut for the Proteas Women Cricket team and adding a half century to my name.

I want to be remembered as making a difference in people’s lives, having a positive impact and leaving my mark on them and not only as a great athlete. With ambition comes sacrifice and we sometimes forget how we got there and the people who made it possible for us.

Photo 1 Caption: South African sportswoman, Tazmin Brits, won gold in the javelin throw at the 2007 World Youth Championships in Athletics. She qualified to represent South Africa at the 2012 London Olympics, however her dream was shattered in a split second when she was involved in a serious car accident which left her hospitalised for two months. She later returned to sport in cricket. Photo: CSA (Twitter) 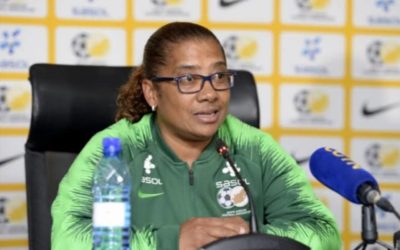 After one week of selection camp, Banyana Banyana Coach, Desiree Ellis and Under 17 coach, Simphiwe Dludlu have named their final 20-woman squad to participate in the 2020 COSAFA Women’s... 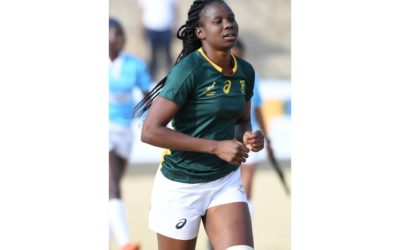 As a young girl, Rights Mkhari harboured dreams of representing her country in sport, and thanks to her dedication and talent she is now a dual international rugby player, playing for the... 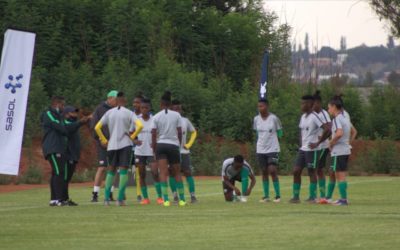 Banyana Banyana coach, Desiree Ellis and her U17 counterpart, Simphiwe Dludlu have given updates on their respective teams after one week selection camps in preparation for the upcoming 2020...