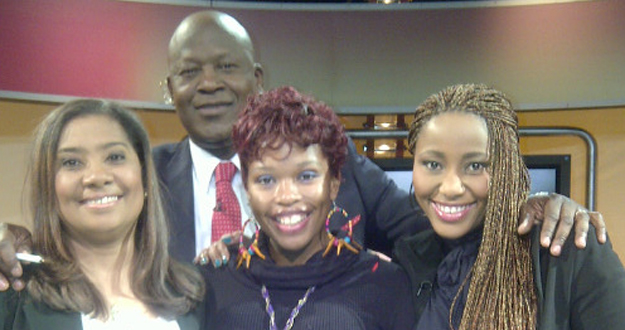 Thembi Mntambo is used to being the star of the show. This livewire has been singing since she was five years old and has always dreamt of being on the big stage, and with her love for music came her nickname: Themstar!

“I entered Shell Road to Fame when I was nine years old. I also sang opera till I was in Grand 9. I left music to focus on my TV career.”

And so a career in sports broadcasting was born, only this time Thembi was behind the camera, directing the show!

Things haven’t come easy to Thembi. She has worked hard over a sustained period to become one of SABC Sport’s top young directors.

Thembi is a livewire; she loves life and is passionate about what she does. This comes across in the live studio shows she directs for SABC Sport, which include Laduma, Soccer 411, Soccerzone and the Sport Preview Show.

Thembi has been with SABC for over a decade, and has slowly built her way up to be taken seriously in what continues to be a male-dominated industry.

“Joining SABC Sport posed a challenge because it’s a man’s world, and I was a driven little girl that wanted to succeed, and to prove that I belonged. It took me two years as a runner and Production assistant to show I belonged in directing, and had a great vision and drive to pull it off.

“I cried a lot in private in the beginning, because some of my male colleagues were very mean to me. But that made me want to succeed even further. Today, I smile when I get told and I know I am one of the best directors SABC (Sport) has ever produced,” Thembi tells gsport.

The 31-year-old, who lives in popular suburb Melville – close enough for work, studied a television production course at Technikon Natal, now known as Durban University of Technology, and has a three-year Diploma in Television. But, it was tough at the beginning…

“I studied on loans every quarter of my studies, had to work to buy text books because my dad earned a minimal wage as a bus driver. After studying, I came to Jozi, and had no friends and family. It was tough,” she reflects.

But Thembi’s journey has seen many highlights since then, including directing studio productions on various sporting showpieces like Olympics, Commonwealth Games, Soccer, Cricket, and Rugby World Cups.

“Meeting the FIFA President Sepp Blatter as a host Broadcaster director,” recalls Thembi, “and have him say he is proud to see young African females making a mark in the Sport industry during the Confederations Cup and 2010 World Cup build-up… I have been blessed indeed.”

Thembi has a major highlight to look forward to in 2013, as part of the SABC Sport production team working on the African Cup of Nations.

“I’m excited to be part of the team that will showcase this great event to the world. AFCON starts on the 19th of January 2013 till end Feb. I have been involved with a lot of similar events at SABC Sport including the 2010 World Cup, but I think this AFCON is going to be incredibly special to the whole team at SABC, being the host broadcaster, and it being the second time South Africa hosts this great African Soccer event.

“I was still at school during the 1996 AFCON, which we won, in my wildest dreams could I predict to be a director of this event for the SABC one day when it is back home again. God is simply gorgeous!”

So, how did Thembi learn the tools of trade? “Hard work, dedication and knowing failure is no option any day, any night.

“I listened, took hard criticism to heart, I fell and rose stronger every time. I had great support from those colleagues that believed in me. For that I am eternally grateful. Mostly, God never left my side.

“I enjoy the adrenalin when we go live on air, I enjoy the team support, and I enjoy the thrill that comes with pulling it off LIVE with so much that could easily go wrong in a blink of an eye. When I say: ‘It’s a wrap!’ and the show was great, I enjoy saying in my heart: “I’m the man!”

Her advice for aspiring sports directors? “Be passionate about television, and making it work regardless of circumstances. Most days are tough, there’s no time to nurse egos. It’s all about making it look beautiful on TV, and getting those ratings intact. As a director, it’s up to you to make it all come together on TV, all the hard work the team puts together before you. So, on your shoulders lies the hope of dozens. It’s either you lead 1000% or get out.”

Thembi says she is inspired by her humble beginnings… “And my family who still want to cry when they sit back and think how far I’ve come. God’s never failing love inspires me, great SA directors I have met, including the ones at SABC Sport, women who do it against all odds are the ultimate inspiration.”

Thembi believes supporting talent at grass roots can raise the profile of women in sport. “We need to nurture and recognise effort and greatness.

“We must continue telling inspirational stories of our female sport heroes in the same magnitude as men in all media forms. We can raise it by one day looking at sporting heroes as just that without labelling them by gender.”

“I am proud to be a South African because of the rich history my country has; the strength of women the country possesses; Ubuntu; being raised by the village instead of only my family; the wisdom and love of our political heroes like Mandela.

“I’m proud to be South African because of the great possibilities my life has, just by being a daughter of this gorgeous diverse country.”

Thembi’s goals for 2013 are: “To continue growing as a TV director and creating opportunities for young women who possess the same dreams I had to get to where I am. I want to take an even closer look at my personal growth. I want to be a better sister to my friends and family. I want to grow in knowing God even more.”