Thousands Converge on Midmar for Day One Action 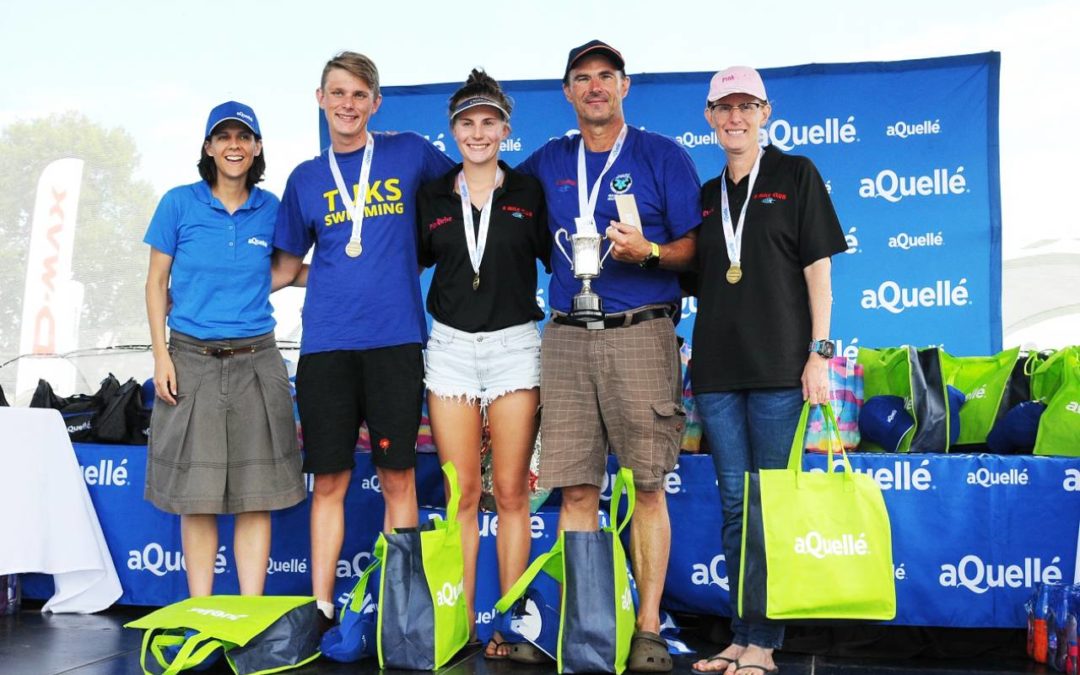 The first day of the 47th edition of the aQuellé Midmar Mile got off to a soggy start but ended bathed in sunshine as four of the weekend’s eight races took place at Midmar Dam just outside Pietermaritzburg.

The world’s largest open water swimming event attracted over 13,000 entries who braved the morning rain to tackle the mile-long course across the famous dam.

The Albertyns from Pretoria once again dominated the Family Relay, scooping up an impressive fourth title. Kaitlyn, was ninth in 20:42 with mom, Megan, in 22nd in 23:02. Only the Dias family now hold more titles in the event with five.

“It was a tough start – very choppy – but it was a good race. It’s always good to race the family event and the pressure mounts, but luckily it’s more on Gary and Caitlyn and Connor than it is on me,” said Megan afterwards, confirming that the family all plan to tackle the 16-mile challenge next year.

“One of the things about our family is that we love challenges and I think all four of us doing 16 miles next year would be an incredible challenge and one that I don’t think too many people can do.

“I think as a family it’s such a bonding weekend, we have so much fun, sharing that experience so that’s the plan. I think I need to train harder. I’m the one that trains the least but come 2021, we’ll hopefully have four Albertyns doing 16 miles.”

“It’s fun to come out and have a great day with your family.” – Paralympic champion, Natalie du Toit.

Earlier, there were some familiar faces among the winners in the first event of the day. Paralympic gold medallist Shireen Shapiro claimed the win in the women’s physically disabled race, finishing in 28 minutes 10.

Another of the recognisable faces emerging from the dam on day one was South Africa’s 13-time Paralympic champion Natalie du Toit, who also famously competed in the Olympics in open water swimming. She retired from the sport in 2012 but returns to Midmar Dam every year to participate in the event.

“I only do one swim a year to come out and support the Teddy Bear Foundation and raise some funds for them, so it was a good swim. It was a little choppy out there for me, but I’m really unfit,” she admitted.

“I haven’t raced since 2012 so I don’t train anymore – I just come in to swim Midmar. It’s fun to come out and have a great day with your family.”

For many first-timers, just reaching the finish line was an achievement.

Meanwhile, it was the Deloitte team of Lauren and Natalie Billson, who came out tops in the Company Relay while Team Traincamp, which included several of the country’s rising swimming stars (Bailey Musgrave, Luca Holtzhausen, Tory Earle, Rebecca Meder and Guy Brooks) claimed the spoils in the final event of the day, the Non-Company Relay.

SA’s national swimming coach Graham Hill hailed the success of the event and the impact it has on the sport in the country.

“What Wayne [Riddin] has done with this event is remarkable. I don’t think people really understand how big this event is, how well-organised it is, and what he’s made it into. It’s probably one of the best open water events in the world and is the biggest.

“For SA Swimming and watersport in South Africa, I don’t think any other event can match this – it’s a truly remarkable event and hats off to Wayne and all the organisers, sponsors and everyone involved.”

As for the elite swimmers, many completed several of the day one events as warm-up for their main races on Sunday, 9 February 2020. Hill maintained the aQuellé Midmar Mile provides an excellent opportunity for them to race ahead of all-important Olympic qualifying events.

“Open water is open water so whether it’s a 1km, 5km, or 10km, which is an Olympic event, it’s always good practice for the open water swimmers to do and it’s great for the pool swimmers who swim the 800s and 1500s, so it’s a bit of a mix in between and interesting to see results. We’ll see how they go,” he said.